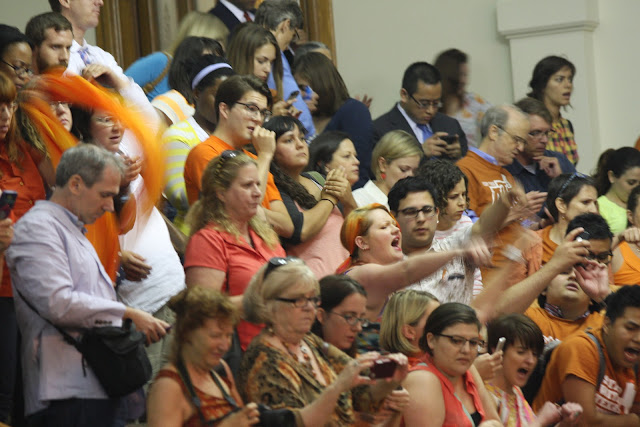 The debate over the Texas Preborn Pain bill revealed the face of the abortion movement. On June 25th, the last day of the first called Special Session, abortion advocates caused a disturbance in the Senate chamber, resulting in the removal 75 protesters. As the midnight deadline to pass the bill approached, pro-abortion protesters violated every rule of decorum.  Activist Eric Heggie tweeted, “They are voting right now! Only way to stop it is total chaos. Gotta rush the floor.”

President Obama egged on the protesters, tweeting that “something special” was happening in Texas.  Political reporter Mike Ward tweeted, “No order in Senate.  Chair can’t hear over jeering from gallery.  Senators can’t vote.  Never seen anything like this.” The bedlam escalated into violence.  Ward later tweeted, “Protestors arguing with troopers in gallery.  ‘One person arrested after trooper was punched,’ say Senate staff.”

Representative Stephanie Klick, RN, (R-Fort Worth) who is a pro-life freshman legislator, was followed to the ladies’ room by some of the miscreants.  They accosted her and yelled, “Abortion is a woman’s right to choose and you oughtta [sic] be ashamed that you’re supporting this legislation!”<

Ultimately, uproarious screaming from the unruly pro-abortion mob prevented the Texas Senate from finalizing the vote before the deadline of the first special session.  As a result, Pro-Life champ Governor Rick Perry called a second special session for lawmakers to finish the business that Texans elected them to do.

Jon Oliver, a spokesman for Senator Donna Campbell, MD, (R-New Braunfels) reported the senator received threatening messages and emails from pro-abortion activists, “I hope you’re raped” and “I hope your daughter is raped!”

Other pro-life lawmakers also faced threats.  Representative Jonathan Stickland (R-Bedford) received a tweet from a female protester saying she couldn’t wait to see the lawmaker so she could “pummel his face in.”  He and a few other pro-life representatives stood on the Senate floor during the filibuster and were captive there until 1:30 a.m. because of the unpredictable crowd that occupied the Capitol outside the Senate chamber.

In the following days, abortion advocates descended upon the Texas Capitol. Protests inside and outside the Capitol grew more chaotic and even downright bizarre.  Abortion activists led their supporters in heckling pro-life demonstrators with chants of “Hail, Satan!”  An array of signs with slogans shocked onlookers, such as “Abortion on Demand and Without Apology,” “Screw Patriarchy,” and “If I Wanted a Lawmaker in My Uterus, I’d F*ck a Senator.”

Representative Scott Sanford (R-McKinney) received a tweet from an abortion advocate threatening, “I will drown @Scott_SanfordTX in blood & bile then feed his corpse to territorial crows.  Satan, come to us we are ready. #hailsatan #tcot.”

The Austin YMCA had agreed to host Students for Life of America who had traveled from afar to rally for life in Austin so that these students could shower and use facilities.  However, abortion advocates pressured the YMCA to rescind this offer.  “[A YMCA employee] was very nice and respectful, but he said they had some push back from people who are pro-abortion,” Alexa Coombs of Students for Life said. “The staff felt threatened so they were not going to allow us to return to use their showers.”  Many of the students were sleeping in churches where showers were not available.

Following passage of House Bill 2 in the State House on Tuesday night (7/9), the abortion crowd protested throughout the Capitol.  On the final procedural vote on Wednesday morning, more rebellion ensued, resulting in several being removed from the House gallery by Texas State Troopers. In the capitol rotunda, an abortion advocate approached pro-life men offering to perform vasectomies and castrations in the parking lot.

In anticipation of the upcoming Senate vote on the bill expected Friday, July 12th, Texas State Troopers have prepared tactical strategies.  The flow of people in and out of the gallery will be controlled, and no disruptions or outbursts will be tolerated.  State Troopers have been instructed to arrest all offenders.

Yet in the midst of all the noise, thousands of little voices are not heard- the voices of preborn children who are never given a chance.  Annually in Texas, an estimated 80,000 abortions occur.  Since the first meeting of the 83rd Texas Legislature in January, approximately 40,000 children have lost their lives.  For the sake of these children and their mothers, this legislation cannot wait for another session.

House Bill 2 would protect babies who can feel pain from deaths by abortion at 5 months. The bill would also protect mothers from the horrific conditions at abortion centers associated with the likes of Kermit Gosnell and Houston’s own Douglas Karpen.  The radical pro-abortion fringe will not be successful in bullying true blue Texans into backing down on protecting the sanctity of innocent human life.