One danger of accusing people of committing a logical fallacy is that you may not actually know what you’re talking about.

Last month I wrote a blog post that a colleague of mine whom I admire disagreed with. She specifically accused me of writing a post that was “full of fallacies.” But when she was asked for examples of these fallacies, she couldn’t name one actual fallacy in the piece. She was only able to name something she didn’t like about the piece. (And, as it turned out, she was objecting to an argument I didn’t even make.)

I’ve been noticing this tendency more often lately. People, especially pro-life nerds like me, are tempted to talk about fallacies all the time in conversation. I think this is often because being able to point out fallacies seems to help us quickly demonstrate the problem with the other persons reasoning, and it kind of shows that we know what we’re talking about when it comes to logic and argumentation. To put it simply, it makes us sound smart. But there are several dangers to this. I’m going to talk about one of them in this post, and another in a followup.

I like something my brother Tim said as we discussed this issue:

When some people say “that’s a fallacy,” it’s sometimes nothing more than a sophisticated way of stating “I disagree with you.” But being wrong about something is different than committing a fallacy.

Gary Busey used that phrase in just about every episode of Celebrity Apprentice All Stars this year. He would yell “THAT’S A FALLACY!” And every single time it meant, “I don’t agree with what you just said!”

In a recent blog post I referred to Paul Graham’s hierarchy or arguments: 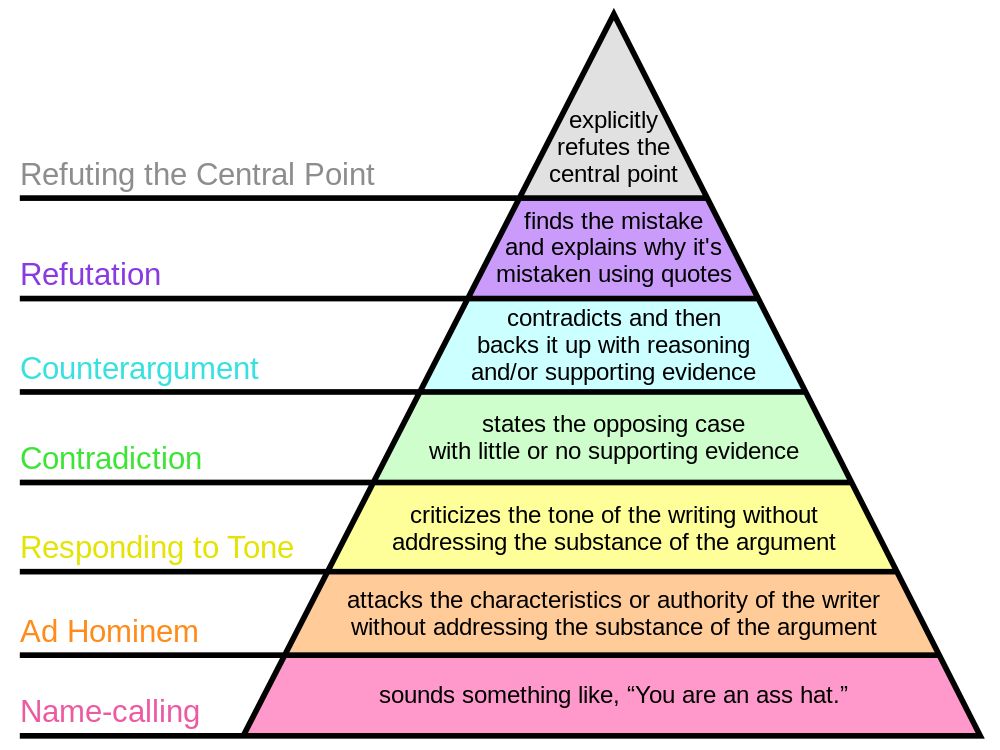 As I said in the post, I see people simply contradicting each other the most often. Instead of responding to the persons argument, they lazily reply by restating what the opposite view is with little or no supporting evidence. Accusing people of fallacies when what you really mean is that you don’t agree with them is another form of contradiction.

And it’s not persuasive.

Let me give you an example of a fallacy people often accuse each other of even though they might not know what it actually is: an ad hominem fallacy. I’ve seen conversations where as soon as one party says something remotely negative about the other party, they’re accused of an ad hominem attack.

I recently stumbled upon a video that I think would be a helpful quick lesson to both pro-life and pro-choice people, because I think many people on both sides may be confused about the definition of an “ad hominem fallacy.”

This is an ad-hominem fallacy.

As William Lane Craig explains in the video below, an ad hominem fallacy happens when the reason you reject the other persons conclusion is because you attack his person.

Note: I really don’t like the use of the word “troll” as the title of this video. It wasn’t made or put out by William Lane Craig’s organization Reasonable Faith, who I’m sure would have been more respectful in the way they referred to the person asking the question.

Does this mean you should feel free to say whatever you want about other people as long as you’re not automatically rejecting their conclusions? Of course not. But I think you should consider carefully what an ad hominem fallacy really is before you cry foul when the person you’re dialoguing with says something that has anything to do with your character.

Consider this illustration. Imagine that I’m an abortionist on the side, but I continue blogging and speaking about pro-life arguments. Would being an abortionist make my arguments false? No, but I would probably be the biggest hypocrite on the planet. Now notice the difference between these two arguments that a pro-choice person could offer if they found out about my day job killing babies:

I don’t think the latter is an ad hominem fallacy.

In my next post, I’m going to describe what I believe is the best way to graciously expose logical fallacies after you’ve correctly identified them in your mind.