The Berlin media is reporting that the German government is building a memorial to all the victims of the T4 Nazi euthanasia program in Berlin.

The planned exhibit at Tiergartenstrasse 4 in the capital will be dedicated to the victims of the “euthanasia” program used by the Nazis to kill those with physical or mental illnesses. Hitler’s Nazi regime killed more than 200,000 people who were either psychotherapy patients or physically disabled between January 1940 and August 1941.

The euthanasia program was run out of the same Tiergartenstrasse address and was even codenamed “T4.” A commemorative plaque has adorned the site since 1986.

The German minister for cultural state affairs, Bernd Neumann, attended the laying of the foundation stone on Monday, saying that the monument should set a sign “against hate, delusion and coldheartedness – and for tolerance, empathy and a respect for life.”

It is important to understand the history of the Nazi euthanasia program. Most people believe that what happened in Nazi Germany has no historical connection to the modern day pro-euthanasia ideology.

The euthanasia philosophy came from the eugenics movement. In Germany, a book entitled: Permitting the Destruction of Life Unworthy of Life was written by Binding and Hoche and published in 1920. This book was the catalyst for the Nazi euthanasia program.

I have read Permitting the Destruction of Life Unworthy of Life several times. This book goes through a systematic explanation of why society should permit euthanasia and how it is more compassionate and better for society to kill people with disabilities or people who have chronic or terminal conditions. 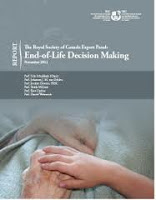 Then read the Groningen Protocol. They are very similar. Link.

Then read the report of the Royal Society of Canada. Link.

Links to other articles about the T-4 Nazi euthanasia program.
* The victims of Nazi euthanasia have been forgotten.
* Holocaust memorial day. Let’s not forget the key role doctors played.

* The eugenic philosophy is alive in our culture.