This is the first in a series of reports that document the fact that abortion clinics with dangerously troubled abortionists continue to illegally operate “under the radar” of regulatory authorities.

“Our investigations reveal that there is a public safety crisis in Maryland with unlicensed abortion clinics that flatly refuse to comply with the law,” said Operation Rescue President Troy Newman. “We are exposing this public danger with the hope that Maryland will step up and enforce their laws.”

An undercover call placed by an Operation Rescue investigator confirmed that Alexander’s Integrated OB/GYN Services, located at 7610 Pennsylvania Avenue #305 in Forestville, Maryland, is attempting to conceal abortion operations under the guise of a “doctor’s office” called Moore & Associates, which has recently located in the same office as Alexander’s Integrated OB/GYN Services abortion clinic.

Doctor’s offices that do occasional abortions do not have to be licensed under the new rules, but Alexander has exploited this provision to avoid having to license his abortion business or submit to health and safety regulations put in place to protect women from abuses that came to light in the cases of Pennsylvania’s Kermit Gosnell and New Jersey’s Steven Chase Brigham.

“Given Alexander’s troubled past and current probationary status, it is extremely problematic for him to be operating a surreptitious abortion business,” said Newman. “The regulations were enacted to bring unaccountable abortion clinics into compliance with minimum health and safety standards and provide oversight for the abortion industry. They way Alexander is operating, he has placed himself completely under the radar of oversight authorities. It’s a dangerous situation, especially since it seems clear that Alexander is purposefully evading licensing requirements.”

There is reason to believe that intentional deception is behind Alexander’s scheme to avoid licensure of his abortion clinic and the accountability that would bring.

Alexander remains under probation after having served a three-month license suspension for numerous acts of unprofessional conduct, including sexual boundary violations, botched abortions, shoddy or non-existent record keeping, and the illegal prescribing of large amounts of Viagra and other drugs to himself and non-patients. Included in the Board charges were finding that he destroyed medical records under subpoena by the Maryland Board of Physicians related to a dangerous bi-state late-term abortion scheme that he was conducting with disgraced Florida abortionist James Scott Pendergraft, IV. Those records had been subpoenaed in response to an Operation Rescue compliant based on the discovery of Alexander’s involvement in Pendergraft’s shady late-term abortion business during an investigation conducted by Operation Rescue.

Adding to Alexander’s troubles was a million-dollar civil judgment levied against him earlier this year, which was reduced by a judge in March to the still-significant amount of $650,000. A jury found that Alexander was negligent in the case of Shannon Hall, a 21-year old college student who went to Alexander in 2008 for an abortion of what she was told was a 10-12 week pregnancy.

However, pathology reports after the abortion indicated that Hall experienced a molar pregnancy, which involves growing tissue that does not contain a baby. If left untreated, it can grow through the uterine wall and involve other organs, eventually turning cancerous. This is exactly what happened to Hall.

After the abortion, Hall submitted blood for three additional pregnancy tests that all tested positive for pregnancy and showed increased levels of the Human Chorionic Gonadotropin (hCG). Standards of care required Alexander to refer Hall to a gynecological oncologist, but instead he did nothing. As a result, Hall was rushed to the hospital three months later suffering from hemorrhaging and abdominal pain where it was discovered that the molar pregnancy had indeed metastasized, necessitating a full abdominal hysterectomy. The cancer also had invaded her lungs and required extensive treatment. As the result of Alexander’s negligence, Shannon Hall will never have children and will suffer health effects for the rest of her life. 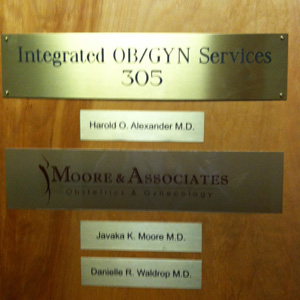 Under suspension and the burden of a $650,000 civil judgment and the new mandate to comply with licensing and inspection requirements, it appeared that Alexander had shut down his Integrated OB/GYN abortion clinic, which was listed as a co-defendant on the Hall civil judgment. The Integrated OB/GYN website was removed for a time from the Internet. However, it appears now that Alexander never stopped operating his abortion business and had his brother, Kevin, also a physician, fill in as the abortionist while Harold fulfilled his term of suspension.

The signage on the front door of Alexander’s abortion clinic now indicates that another business, Moore OB/GYN now occupies the same office. Alexander’s name is under the “Integrated OB/GYN” sign, but not under the “Moore OB/GYN sign.”

Integrated’s web site is back online and advertizing abortions with Moore OB/GYN’s outdated address listed as an affiliate. 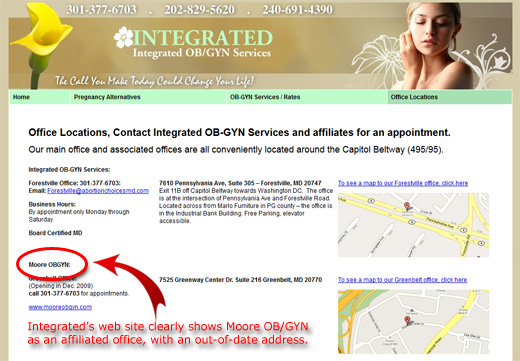 Operation Rescue investigated further with an undercover call placed by one of our investigators on May 21, 2013, where the caller posed as a woman seeking abortion services.

“We’re not an abortion clinic.”

The investigator called the phone number for Moore OB/GYN that was listed on that office’s web site, which is separate from the Integrated site. The Moore OB/GYN receptionist identified the office as a “doctor’s office” but gave our caller the address and phone number that is specifically assigned to Alexander’s Integrated OB/GYN abortion clinic.

After having been asked what doctor she would be seeing, the receptionist admitted that the abortionist was Harold O. Alexander, but added, “Yeah, we’re a doctor’s office, honey. We’re not an abortion clinic.”

This comment was unusual since the caller never asked about whether the office was an abortion clinic.

The undercover call confirmed Alexander’s scheme to avoid compliance with the law, but it also revealed several aspects of Alexander’s abortion business that were just as disturbing.

For instance, pain medication is dispensed based on the patient’s ability to pay. This is a policy that was also employed by Kermit Gosnell. Pro-choice prosecutors lambasted Gosnell over and over during his murder trial for putting personal profit above the best interests of the women by charging more for pain relief during a surgical procedure. In fact, testimony given during Gosnell’s trial stated that when women could no longer lay still due to the pain, one of the larger workers was called in to help hold down the uncooperative patient.

At Alexander’s abortion business, only women who can afford to pay an extra $100 get the benefit of pain relief. The rest are subjected to what amounts to physical torture.

Another disturbing aspect of Alexander’s abortion practice is the late night abortions. The receptionist told our caller that on some days, abortion appointments begin at 7:30 PM. This is nearly identical to Gosnell’s under-the-radar abortion schedule. At this time of the evening, women could not be released until the late-night or early-morning hours.

In addition, the abortion business receptionist failed to even take the patient’s last name, phone number, or any other information of a personal or medical background, except to ask for the prospective patient’s blood type. No pre-operative instructions were give whatsoever, which could lead to potential complications during any surgical procedure.

Maryland law requires that those who do abortions regularly must be licensed as an abortion clinic. Alexander’s Moore/Integrated OB/GYN receptionist indicated to our caller that appointments were available at least five days per week, on Tuesdays, Wednesdays, Fridays, and Saturdays, but possibly more.

“A four-day per week abortion business certainly qualifies as a ‘regular’ abortion business and goes far beyond the occasional abortion that might be done by an OB/GYN on his own patients without tripping the requirement for abortion clinic licensing,” said Newman. “Alexander is attempting to evade the law, plain and simple. Perhaps he does not want to submit to inspections, or maybe he has something else to hide. He is still on probation for a number of professional violations. If he is caught in additional wrong-doing, it could mean the end of his medical license.”

On May 24, 2013, the Maryland Department of Health and Mental Hygiene sent a letter to two state legislators updating them on the status of surgical abortion clinic compliance in Maryland under the new regulations. In that letter, the DHMH gave assurances that unlicensed abortion clinics would be subject to enforcement.

“Under the Department’s regulations, facilities that ‘provide surgical termination of pregnancy as a regular service’ are required to obtain a surgical abortion facility license. The Department is investigating the referred complaints and intends to enforce the requirements set forth in its regulations,” the letter stated.

Yet almost a month after the letter was issued, action has yet to be taken against Alexander’s unlicensed abortion clinic. Operation Rescue is calling on the Maryland Department of Health Office of Health Care Quality to immediately act to close Alexander’s shifty abortion business.

“Once more we are taking information about legal violations directly to the public and asking for help in persuading the OHCQ to step in,” said Newman. “We’ve been patient with promises from the OHCQ that they would deal with unlicensed abortion clinics, but they have yet to do so.”