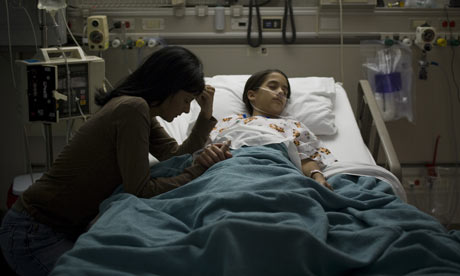 The Netherlands and Belgium seem to be in a race to the bottom of medical ethics. Early in the week, Belgium was ahead by a nose. Its Parliament reportedly reached a consensus on expanding controversial euthanasia policies to include access for gravely ill children. But the very next day the Netherlands broke clear and lunged ahead.

The Dutch press reported an even more startling development on the euthanasia front. Distress felt by parents of a dying newborn is a justification for killing their child, declared the Royal Dutch Medical Association (KNMG), which represents doctors in the Netherlands.

In a new policy document, “Medical decisions about the lives of newborns with severe abnormalities” (in Dutch only) the KNMG explained why it is acceptable, and sometimes even necessary, to euthanase children. In the Netherlands giving lethal injections to severely disabled babies or starving them is no longer headline news, as newborn euthanasia is clearly allowed under the so-called 2004 Groningen Protocol.

The stunning novelty of this week’s statement is that it says that the parents’ suffering may be a reason to kill the newborn. Amongst other conditions, the policy states that a lethal injection of muscle relaxant is ethically possible when “The period of gasping and dying persists and the inevitable death is prolonged, in spite of good preparation, and it causes severe suffering for the parents.”

It is important to grasp what is so revolutionary about this bland statement. An innocent human being may be killed without expressing a desire to die because his continued existence is emotionally distressing for others. The genie is out of the bottle. Today it is severely disabled babies; tomorrow it could be brain-damaged teenagers; the day after it could be the demented elderly. You would have no heart if you didn’t suffer because of these cases; you would have a heart of stone if you killed them to stop your own pain.

Dr Verhagen, one of the authors of the KNMG report and the architect of the Gronignen Protocol, explained to Volkskrant, a leading Dutch newspaper, why parental anguish is relevant. “These children are gray and cold, they get blue lips and suddenly every few minutes they take extremely deep breaths. That’s very nasty to see, and it can go on for hours and sometimes days.”

The experience is extremely stressful for parents. The sight of a child shuddering in its last moments could scar them for ever. However, even Dr Verhagen admits that the child may not actually be suffering. It may feel pain and discomfort, but suffering is a complex social and psychological phenomenon without scientifically validated criteria.

More objective is the suffering of the parents who witness the child’s distress. Doctors should spare parents the “abomination” of seeing their child die in distress, explains Dr Verhagen. It is part of good palliative care.

The criteria for euthanasing newborns are as follows (from page 54 of the report): if the child is suffering, if it cannot express its own wishes, if death is inevitable and if the dying process is prolonged, then the child may be euthanased and spare the parents further severe suffering.

Of the 175,000 babies born every year in The Netherlands, the KNMG suggests that about 650 might be cases which would be worthy of euthanasia.

“These babies, despite very intensive treatment, will certainly die in the short term. They have a poor prognosis and a very bleak life perspective. They may not be dependent on intensive care but they face a life of serious and hopeless suffering. Doctors and parents face the exceedingly profound question of whether to start or continue treatment or even whether a good action may actually be a harm, in view of the suffering and disability that may result from the poor health of the child.”

Dr Verhagen is probably the best-known exponent of euthanasia for children in the Netherlands. Last month the Journal of Medical Ethics published his defence of the Groningen Protocol. He dismissed fears that the Netherlands is sliding down a slippery slope. Over the five years since its publication the gloomy predictions have failed to materialise, he said. The number of cases of neonatal euthanasia has not increased. Instead, antenatal screening improved and the severely disabled babies were aborted instead. “This resulted in increased terminations of pregnancy and fewer instances of euthanasia,” he wrote triumphantly.

Perhaps we should avoid the term “slippery slope” if it leads doctors to assert such nonsense. The point is that in the Netherlands and Belgium euthanasia bracket creep has taken hold. The criteria shift ever outward, from terminally ill adults, to adults who have lost their interest in living, to suffering children, and now to children whose parents are suffering.

Anyone with an ounce of sense can see that the day is not far off in the Netherlands and Belgium when the suffering of adult children will be reason enough to euthanase their frail and aged parents. “Please, doctor, put her out of our misery.”