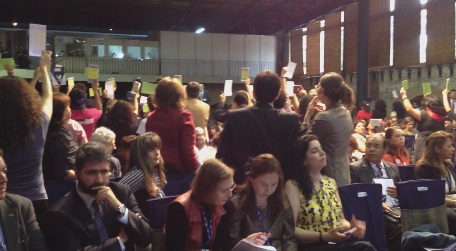 During the Organization of American States (OAS) 43rd General Assembly session in Antigua Guatemala City, Guatemala this week, dozens of members from anti-life organizations in the audience stood and turned their backs in protest as a representative of Human Life International (HLI) asked member state delegates to ensure greater protection of life, family, and religious freedom in OAS’s efforts throughout the region.

“The right to life must be recognized from the moment of conception to the moment of natural death. It is the fundamental, primary and most important human right, without which the essence of human rights is lost,” Larissa Ríos of Association Life and Human Dignity, HLI’s affiliate in Guatemala, told representatives of the 35 member states of the OAS on Tuesday. She went on to say, “Article 17 of the Inter American Convention on Human Rights must be at all times respected, the article that protects the family throughout the American continent. The Convention clearly defends … the family, life, and freedom of religion.”

As soon as Ríos began speaking, opponents of HLI’s message stood and turned their backs on her and the OAS delegates (see the video here).

HLI’s pro-life and pro-family statement to the OAS was in response to efforts by other civil society organizations (CSOs) to include language aimed at promoting abortion and homosexual “marriage” in a declaration concerning a policy to fight drug abuse.

After an intense debate on Monday where anti-life and anti-family organizations in attendance repeatedly sought to intimidate and silence HLI’s representatives, it appeared efforts to present the pro-life prospective at the OAS would be unsuccessful. But in a surprise move, HLI was granted an audience before the OAS General Assembly on Tuesday.

Mario Rojas, HLI’s regional director of Latin America, described the outcome as a complete success: “After many years during which the anti-life and anti-family representatives have dominated the CSO scene at the OAS, the member state delegates finally heard a proposal on life and family principles which could contribute to the well-being of their countries and their people.”

“Our Lady of Guadalupe was the miracle worker in Guatemala,” said HLI Guatemala Director Alfonso Brañas. “Our pro-life and pro-family groups have been working and praying hard for almost a year, commending it all to the Most Blessed Virgin Mary and to Saint Michael the Archangel. We are beyond joyful and grateful for this victory for life and family.”

HLI President Father Shenan J. Boquet applauded HLI’s representatives at the OAS this week for their efforts in the face of persecution.

“May God touch the hardened hearts of those unwilling to even listen during the session this week,” he said. “I’m grateful to our pro-life missionaries for their continued efforts to spread the Gospel of Life around the world. Under the mantle of Our Lady of Guadalupe, HLI will continue to call for a new Culture of Life to be reborn in the Americas.”