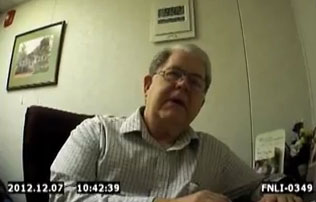 The pro-life group Live Action has released a fourth video in a series of undercover videos catching late-term abortion practitioners and abortion clinics misleading women and showing indifference to the destruction of human life.

The videos show embattled abortion practitioner Kermit Gosnell is not an anomaly.

The latest investigative video release captures late-term abortionist LeRoy Carhart on tape discussing the grisly details of the abortion procedure and misleading a pregnant woman regarding the dangers of abortion.

Cahart’s testimony is shocking and disturbing. He compares the child in the womb to “meat in a Crock-Pot” and then jokes about his abortion toolkit, complete with a “pickaxe” and “drill bit.” This is the second time Carhart has used the terminology.

“It’s like putting meat in a Crock-Pot, OK?” he tells the woman considering an abortion.

When a Live Action investigator, who is 26 weeks pregnant, asks about what happens to the baby during the procedure, Dr. Carhart responds:

Dr. Carhart: It gets soft – like, mushy – so you push it through.

Woman: So what makes the baby “mushy”?

Dr. Carhart: For 3 days, yeah… It’s like putting meat in a crock pot, okay? … It gets softer. It doesn’t get infected or–

Woman: OK, so the dead baby in me is like meat in a crock pot.

Dr. Carhart: Pretty much, yeah … in a slow cooker.

We do a shot into the fetus to end the pregnancy the first day. … Well, if everything works right, you just deliver them and they come out fine. I mean, if for some reason that doesn’t happen, then we have to take them out in pieces…

A twenty-six-week pregnant Live Action investigator inquires what will happen in the case of complications:

Woman: But if we run into trouble … for some reason, I’m not able to deliver, you’ll be able to get it out in pieces.

Dr. Carhart: We’d take it out…

Woman: What do you use to break it up? Just–

Dr. Carhart: A whole bunch of–

Woman: You’ve got a toolkit.

He casually described the abortion as a “shot into the fetus” to ensure that “[i]t’ll be dead for two days before you deliver it.” He told her the injection also causes the baby to “[get] soft, like mushy [makes squishing sound], so you push it through… so it’s like putting meat in a crock pot.” If this method is unsuccessful, he would  have to remove the baby “in pieces,” using, he joked, “a pickaxe, a drill bit.”

Both investigators asked if Carhart’s abortions “hurt” the babies. He replied by arbitrarily inventing his own parameters for when a fetus feels pain. “so, after about two to three weeks after birth… I think then they have pretty good knowledge of pain, but before that I’m not so sure that they do.” In fact, there is wide consensus in the scientific community that babies feel acute pain by 20 weeks of gestation.

Lila Rose, the president of Live Action issued these comments about the new video:

The video exposes Carhart’s shocking claims that “[a]ll the late abortions Carhart has done in Germantown have involved fetuses with abnormalities[.]” Yet, he was willing to schedule a late-term abortion for our investigator, who was a healthy woman with a healthy pregnancy.

This investigation reveals the horrors of the abortion industry and exposes the true victims in this situation: the mother and her child. Our videos expose the gruesome, illegal, and inhuman practices going on inside many of America’s abortion centers. Instead of this being a rare occurrence, we have proven that this is the norm.

The new video comes on the heels of abortion doctor Cesare Santangelo of Washington, D.C, who was exposed on a recent undercover video telling a 24-week pregnant woman that in the unlikely event that an abortion resulted in a live birth, “we would not help it.”  Before that, the pro-life group released a video showing an abortion facility staff member saying an unborn child born alive after a botched abortion should just be flushed down the toilet.

A third shocking undercover video has been released showing abortion clinic staffers saying they will not revive babies who are born alive after failed abortions.