Planned Parenthood of Delaware has temporarily halted surgical abortion services. This action makes Delaware the first state to be free from surgical abortions for any significant period of time since the 1973 Roe v. Wade decision decriminalized abortion.

The Planned Parenthood clinic in Dover has temporarily suspended surgical abortions while the Wilmington affiliate has closed completely for cleaning and re-staffing, according to Planned Parenthood statements to the media and on their website. At least three employees, one thought to be troubled abortionist Eric Schaff, have quit or been fired since dangerous conditions at the facilities were exposed. 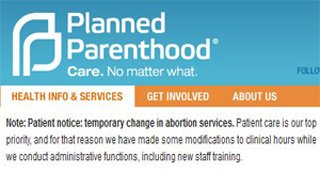 In recent weeks Planned Parenthood of Delaware was the subject of a hard-hitting series of exposés by one of the nation’s leading pro-life advocacy groups, Operation Rescue.

In February, Operation Rescue was the first to reveal an alarming trend of abortion-related medical emergencies at the Planned Parenthood clinic in Wilmington. In March, the group also released video footage of an attack on a peaceful pro-life grandmother at the same location. Events cascaded quickly for the abortion provider, and now, Planned Parenthood of Delaware is under state investigation after Operation Rescue filed numerous complaints and organized its supporters to email and call Delaware authorities.

Operation Rescue assisted with ABC Action News investigation that documented the Wilmington clinic’s conditions. The shocking news report proves the unsanitary practices at this Planned Parenthood were no different than those inside Kermit Gosnell’s squalid “House of Horrors” in Philadelphia. Gosnell is currently on trial for 5 counts of murder and a host of other abortion-related crimes.

The allegations that shuttered this clinic’s surgical practice include: filthy conditions, use of unsterile medical equipment, over-medicated patients, and failure to wash hands between surgeries. In addition, several former employees and patients are in the process of filing lawsuits against the abortion giant for health code violations and medical malpractice.

The two Planned Parenthood facilities are the last remaining abortion facilities in Delaware after two affiliates of the Atlantic Women’s Medical Services closed in 2011 when news of their association with Gosell surfaced and numerous health and safety violations were discovered.

“Filthy clinics are the status quo in the abortion industry. Kermit Gosnell is not an outlier and the complaints against Planned Parenthood of Delaware prove that Big Abortion regularly puts the lives of women at risk for STD’s, HIV and even death,” said Troy Newman, President of Operation Rescue.

Newman continued: “We now have the first state that is officially free from surgical abortions, at least for now. This will undoubtedly save babies and send a clear message to the abortion industry that regulation and oversight will shut them down for good.”

Rev. Patrick J. Mahoney, Director of the Christian Defense Coalition in Washington, D.C., states: “We celebrate the fact that, for the first time in 40 years, we have a surgically free abortion state. Even though these clinics may re-open shortly, this serves as a powerful reminder that abortion in America will soon be on the scrap heap of history.

“Like with slavery and segregation, our nation is growing tired of the violence of abortion and how it crushes human rights, justice, and equality for all. Every major poll taken shows Americans are troubled by abortion on demand and its tragic consequences.

“Delaware is providing a clear blueprint of how abortion will end in America. The pro-life movement will continue to chip away at Roe v. Wade through local initiatives, regulations and laws, until it no longer has any impact or standing.”