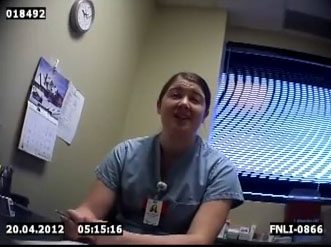 A third shocking undercover video has been released showing abortion clinic staffers saying they will not revive babies who are born alive after failed abortions. The videos show embattled abortion practitioner Kermit Gosnell was not an anomaly.

The new video comes on the heels of abortion doctor Cesare Santangelo of Washington, D.C, who was exposed on a recent undercover video telling a 24-week pregnant woman that in the unlikely event that an abortion resulted in a live birth, “we would not help it.”  Before that, the pro-life group released a video showing an abortion facility staff member saying an unborn child born alive after a botched abortion should just be flushed down the toilet.

This is the third in a series of undercover videos, found at www.liveaction.org/inhuman, involving the illegal and inhuman practices of late-term abortion centers, as well as describing in horrific detail what happens to the mother and baby in a late-term abortion.