Two witnesses took the stand yesterday in the capital murder case of Kermit Gosnell, providing testimony from the perspectives of a patient and an employee of substandard conditions and illegal practices at Gosnell’s “House of Horrors” clinic at 3801 Lancaster.

Mary Kincade had been a patient at Gosnell’s Women’s Medical Society clinic for about ten years and was last seen five to six years ago. She said she only saw Eileen O’Neill, who other clinic workers referred to as “Doctor” even though she had no license to practice in Pennsylvania. Kincade was not an abortion patient, but saw O’Neill for yearly well woman exams. Kincade never saw Gosnell at the clinic during any of her visits.

O’Neill is on trial with Gosnell on charges of theft by Deception, Conspiracy to commit theft, Racketeering, Conspiracy related to corruption, Perjury, and False Swearing.

Kincade thought O’Neill was a licensed physician and noted that certificates hung on the wall of her office, which led her to believe they allowed her to practice medicine.

There was a discrepancy in Kincade’s patient file concerning co-payments for office visits. Kincade testified that she remitted a co-pay of $30-40 each time she saw O’Neill. However, in her file, there was only one receipt for $40 to indicate she ever paid any money. The inference of this testimony was that there were irregularities in the billing and record-keeping practices at Gosnell’s clinic, although prosecutors did not fully detail their theory concerning what appeared to be evidence of financial malfeasance during today’s court proceedings.

The longest testimony of the day came from Latosha Lewis, 31, a medical assistant who worked for Gosnell for almost ten years. Lewis was not arrested with Gosnell and his eight co-workers in January, 2011. Instead, she was arrested and charged by the Federal Government related to apparent drug activities at Gosnell’s clinic. She entered a guilty plea agreement and faces a maximum sentence of 80 years in prison and a “hefty” fine. She will be sentenced sometime later and could receive leniency due to her cooperation with prosecutors.

Lewis testified about her training and how her duties at Women’s Medical Society grew until she was assisting with abortion procedures. She stopped doing so in 2007 because she overdosed a woman and was worried about whether she would ever come out of anesthesia. She also said she stopped administering Cytotec, a drug that caused powerful and often unpredictable contractions around the same time.

“I saw women deliver too quickly and didn’t want to deal with that,” she explained.

Lewis testified that Gosnell was well aware of why she refused to continue to drug women. He reassigned her to work at the front desk.

Reused Curettes Cause Spike in STDs

Lewis indicated that Gosnell’s equipment was outdated and never inspected, and that he often reused disposable curettes, which is the sharp-ended tube that enters the womb in abortion procedures and applies suction for the removal of the pre-born baby and other tissues and fluids.

Lewis testified that the curettes were washed, dried and placed in an antiseptic solution, then reused. The curettes are meant to be disposable and for single use only. She indicated that she noticed that women who had abortions using the reused curettes began returning to the clinic suffering from sexually transmitted diseases.

Lewis was on duty when Karnamaya Mongar came for her abortion, and through the use of a relative as a translator, she helped fill out Mongar’s medical history forms and took her vitals.

Mongar’s original chart seized from Gosnell’s clinic was examined in court. Those who touched it were instructed to don purple latex gloves because the file was stained with blood and other bodily fluids and emitted an unpleasant odor.

There was no notation of Mongar’s weight on the chart, which is usually important information for women undergoing anesthesia. Lewis testified that the scale in the clinic had been broken for a month and she had no way to weigh patients.

Lewis noted that Mongar started the clinic on the first day she arrived at the clinic, which violated a law that requires information be given 24 hours prior to an abortion. Nevertheless, Lewis inserted the form into Mongar’s chart and signed it affirming that the 24-hour waiting period had been observed. Lewis said she had already left work for the day and was not present when Mongar died.

Lewis testified that notations in the chart and in a narcotics log book kept at the clinic were unreliable because other workers failed to consistently make proper entries, therefore no one really knew exactly what the patients were given or when. 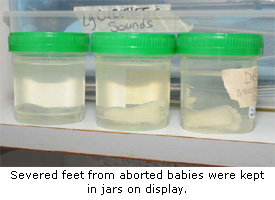 In one of the more dramatic moments of the day, Prosecutor Ed Cameron brought Lewis to a square white rolling table that had been seized from Gosnell’s clinic and brought into the courtroom along with other pieces of outdated and filthy furniture and equipment. The metal legs of the table were rusted and dirty. Lewis agreed that Gosnell would pull out a flat shelf from the table and there he would measure fetal feet that were placed in glass trays, just as Cameron demonstrated for the jury.

Jars with severed feet in formaldehyde were discovered in Gosnell’s abortion clinic over a wash sink where smaller abortion remains were washed down a drain and ground with a garbage disposal.

Cameron then went through a tedious process of reviewing one patient file after the other, confirming the amounts of drugs given as well as the size of the baby’s heads on the multiple ultrasound found in each chart along with the fetal ages recorded in the charts.

In general, ultrasound measurements showing the biparietal diameter, or BPD, which is the measurement across the baby’s head, varied from 53-75.8 mm. This measurement is used to determine fetal age. However, recorded in the charts almost uniformly was the fetal age of 24.5 weeks.

According to a chart found on the Internet, 53 mm BPD equates roughly to 22 weeks gestation. A 75.8 mm BPD would represent 29-30 weeks gestation both ends of the spectrum were noted as representing fetal ages of 24.5 weeks in the charts.

Many charts had notations concerning the cost of the second trimester procedures. Prices ranged from $830-1,665. Many women who did not have the full amount were aided by an abortion fund that raises money to pay for portions of an abortion bill that patients cannot cover. However, more women signed promissory notes and were put on a payment plan for the balance. Lewis testified it was not unusual for women to disappear and never pay their balances.

Defense Attorney Jack McMahon also reviewed each of the files with Lewis. He noted that there were signed consent forms in most of that charts that included a 24 Hour Consent for abortion, a consent to be given Cytotec, and a consent form for the use of Digoxin, a heart medication that is injected into the pregnant woman’s abdomen for the purpose of bringing about “fetal demise” prior to the abortion.

Another Digoxin form in some of the charts contained a diagram of a pregnant abdomen with intersecting lines defining four quadrants were a notation was to be made to indicate the location of the Digoxin injection.

McMahon made much of the paperwork before the jury and emphasized how it showed that Gosnell did indeed obtain the necessary consent. Attention to the Digoxin forms was meant to bolster his argument that all the babies aborted at Gosnell’s clinic were already dead before being expelled from the womb.

Cameron Delivers Question of the Day 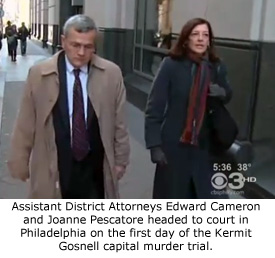 Cameron powerfully nullified McMahon’s afternoon of work by pointing out that each and every file contained information about abortions done at 24 weeks or later. The last day an abortion can legally be done in Pennsylvania is 23 weeks 6 days.

“He got consent to do illegal abortions?” Cameron forcefully asked.

McMahon erupted, but Cameron had made his point.

Gosnell faces seven counts of first degree murder to severing the spinal cords on babies born alive during abortions. Hes also faces one count of third degree murder in the death of Karnamaya Mongar, who died of a drug overdose during an abortion by Gosnell. In addition, Gosnell is charged with Abuse of Corpse, Tampering with Evidence, Corruption, Conspiracy, Obstruction, Racketeering, and Solicitation for Murder. If convicted, Gosnell faces the death penalty.