The media is promoting the sad story of Susan Griffiths, a Winnipeg Manitoba woman who decided to die at the Dignitas suicide clinic in Switzerland. Griffiths has Multiple System Atrophy, a condition that will leave her significantly disabled before she dies.

I understand the feelings that Griffiths has and I understand her fear of living with disabilities, but her condition and her story are only part of the assisted dying debate and her condition is not a reason to legally permit physicians to lethally inject or to prescribe suicide for their patients.

Legalizing Euthanasia and/or assisted suicide (assisted death) would permit, in law, one group of people (usually physicians) to have the right to kill another group of people, their patients, whose lives are deemed to be not worth living.

We oppose assisted death because it is not safe to give one person, the right in law, to kill be be involved with killing another person. Abuse will occur and some doctors will cause deaths without request or act outside of the law. The only question is how many deaths without request are considered acceptable within a society?

In jurisdictions where assisted death have been legalized, some people have been killed without consent and others have been coerced, to “choose” to die.

In Switzerland, where Griffiths will die, the assisted death law lacks effective safeguards to protect people from abuse. Further to that, the Dignitas suicide clinic, that Griffiths will die at, has been implicated for significant abuse.

In Belgium and the Netherlands where assisted death is legal, with safeguards, studies have proven that the safeguards are often ignored, that the law is abused and people are dying without request.

Three recent studies concerning the practice of assisted death in the Flanders Region of Belgium found:

The same study found that the assisted deaths that were done without explicit consent tended to be done to a person who was over the age of 80, who did not have cancer, who were incompetent to consent and who died in the hospital. This study concluded that:

“this demographic fit the description of a vulnerable patient group at risk of life-ending without request.” 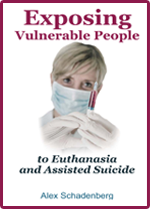 “As such legislation alone does not seem sufficient to reach the goal of transparency (total or 100% transparency seems to be a rather utopian ideal).”

The study concluded that:

It must be noted that there has never been an attempted prosecution for abusing the Belgian euthanasia law.

All of the Belgian studies show that assisted deaths that are not reported, done without explicit request or done by nurses are generally done to people who are over the age of 80, who did not have cancer, who were incompetent to consent and who died in a hospital.

To learn more about the current practise and abuses of the Belgium and Netherlands Euthanasia law, order the book, by Alex Schadenberg Exposing Vulnerable People to Euthanasia and Assisted Suicide. ($20 includes shipping). 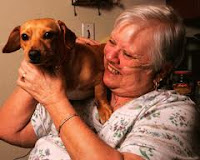 Barbara Wagner had recurrent lung cancer and was prescribed Tarceva, a more aggressive form of treatment. The Oregon health plan denied to treat her for cancer but offered her assisted suicide instead.

This story is not about the willingness of the state to provide aggressive forms of medical treatment, but rather it is about a state that steers its citizens to assisted suicide.

Jeanette Hall, an Oregon resident, was diagnosed with terminal cancer. She decided that she wanted to die by assisted suicide. Instead, Hall’s physician convinced her to try a few treatment options. This is what she recently wrote:

In 2000, I was diagnosed with cancer and told that I had six months to a year to live. I knew that our law had passed, but I didn’t know exactly how to go about doing it. I did not want to suffer, and I did not want to do radiation. I wanted Stevens to help me, but he didn’t really answer me.

Instead, he encouraged me to not give up and ultimately I decided to fight the cancer. I had both chemotherapy and radiation. I am so happy to be alive!

It is now 12 years later. If Stevens had believed in assisted suicide, I would be dead. I thank him and all my doctors for helping me choose “life with dignity.”

This story is not about the proficiency of the safeguards, but rather how legalizing assisted suicide leads to some people, who are experiencing depression or acting our of fear, to give up on life prematurely.

The Oregon law suggests that a doctor who suspects that a patient is depressed or experiencing mental difficulties be sent for a psychological evaluation. Of the 77 assisted suicide deaths in Oregon in 2012 only 2 of them were sent for an evaluation.

An Oregon physician recently wrote about how his depressed patient died by assisted suicide.

Another concern about assisted death laws is the lack of transparency to protect people who die outside of the safeguards of the law. A recent letter by Isaac Jackson, an attorney in Oregon, proves that the Oregon assisted suicide law is unsafe. Jackson wrote:

I am a lawyer in Oregon who specializes in injury claims including wrongful death cases. I understand that Montana will be considering assisted suicide legislation this session. I write to inform your readers that Oregon’s assisted suicide law lacks transparency. Even law enforcement is denied access to information collected by the State. Moreover, this is official state policy.

In 2010, I was retained by a client whose father had died under our assisted-suicide act. Unlike other deaths I have investigated, it was difficult to get basic information.

After I wrote the state epidemiologist, I received a letter from the Attorney General’s Office that the agency charged with collecting assisted-suicide data, the Oregon Health Authority, “may only make public annual statistical information.” The letter also referred me to the Oregon Medical Board and law enforcement.

The Board wrote me that there could be no investigation without an allegation of misconduct against a physician. At my request, a police officer was assigned to the case. Per his confidential report, the Oregon Health Authority would neither confirm nor deny that my client’s father had died under our act. Per the report, the officer did, however, talk to the doctor signing the death certificate who said that he did not know that the death had involved assisted-suicide. The death certificate listed the immediate cause of death as “cancer” and the manner of death as “natural.”

Per the report, the officer also spoke with potential perpetrators who assured him that the death had been voluntary. He closed the case.

Without transparency our law is not safe. 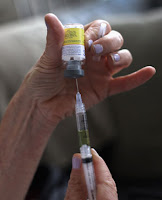 Legalizing euthanasia and/or assisted suicide (assisted death) gives physicians the power, in law, to directly and intentionally cause the death or to prescribe the suicide of their patients. It is not safe.

In jurisdictions where assisted death has been legalized, abuses have occurred and in many circumstances the safeguards in the law have been ignored.

Legalizing assisted death is not safe and will never be safe.

Countries need to protect citizens by maintaining their laws that protect people from euthanasia and assisted suicide.