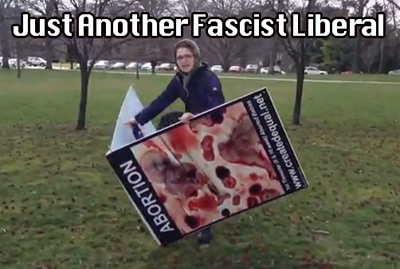 The left claims to be the “tolerant” ones, we all know, but only when you agree with them and a student at Ohio State proved this to be a truism once again by destroying a pro-life student group’s signs right on the school’s campus and on video, yet. Worse, this student employed what the left calls “racist code words” to denounce the pro-lifers.

The thus far unidentified female student is seen on the video rampaging through the pro-life group’s displays screaming that she agrees with abortion to stop “drug addicts” from having unwanted kids.

Naturally this leftist–like all leftists–sees nothing wrong with destroying the public property of those with whom she disagrees. Rights are only for people show “deserve” them as far as the left is concerned.

“You want an overpopulated earth?” the abortion-supporting woman yells. “You want to keep paying taxes for babies that are born to crackheads?”

“You really want a population of people that were born on drugs–that are born into welfare?” she screeches.

“You want to keep paying for that shit?” she asks? “Because I don’t.”

So, let’s break this rant down. What does the left claim when people start talking about poor people on welfare and drug addicts? Don’t they say that this is “code” for minorities? So, is this woman saying that she thinks all abortions are for “drug addicts” (we are to read black people, here, of course) because they are poor and that she agrees with aborting black babies?

Employing the left’s “code word” racism system, that is exactly what she is saying.

We should not hold our breath waiting for the left to denounce this racist, property-destroying, ranting, abortion supporter.

LifeNews.com Note: Warner Todd Huston is an editorial columnist whose work is featured on numerous web sites. He has also written for several history magazines, and appears in the new book “Americans on Politics, Policy and Pop Culture.”