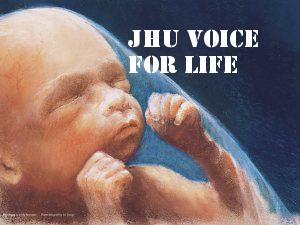 The Executive Vice President of the SGA had previously told the school newspaper, “The SGA Executive Board found that the proposed group (Voice For Life) intended actions as a club that clearly violates the JHU Harassment and Code of Conduct policies as enforced by Dean Boswell and Rob Turning. We have asked them to resubmit their group proposal without sidewalk counseling. We look forward to reading their updated proposal.”

As we noted at the time, it is not the job of the SGA but the University Office of Institutional Equity (OIE) to determine if Voice for Life’s sidewalk counseling constitutes harassment under school policy.

Today, the Vice Provost for Institutional Equity responded to VFL’s request for a ruling and came down in support of the pro-life group’s free speech rights, saying:

“My view is that the proposed ‘sidewalk counseling’ activities, as described in your email, would not violate these university policies. A student group’s distribution of literature and advocacy of its viewpoint, in the manner set out in your email, would not constitute harassment within the meaning of these policies. In fact, such conduct is fully in accord with the university’s robust commitment to the values of free expression and open debate that is articulated in these policies.” (Read the letter here)

Voice for Life President Andrew Guernsey reacted to OIE’s letter saying, “We applaud the JHU Office of Institutional Equity for making it clear that Voice for Life’s proposed activities are protected free speech under the university Anti-Harassment Policy and Student Conduct Code. The unfounded accusations of harassment and racism from the JHU SGA have been an embarrassment not only to this great institution of Johns Hopkins University, but also are demeaning to the true victims of harassment and racial discrimination. This was all merely a pretext for their desperate attempts to prevent pro-life voices from being heard on campus, but Voice for Life is hopeful that the SGA Judiciary will finally do the right thing, and follow the Office of Institutional Equity’s lead to enforce Johns Hopkins’ institutional commitment to free speech. As our motto states, ‘The Truth will set you Free!’”

We’re glad that the Johns Hopkins administration is acknowledging what SFLA has been saying all along, in agreement with the U.S. Supreme Court, that sidewalk counseling is protected free speech. JHU must continue to protect its students’ rights to free speech and association by ensuring VFL is allowed to be an official student organization. We need to make sure the SGA Judiciary gives VHL a fair hearing and abides by the school’s own policy at the hearing Tuesday night. The SGA must still account for comparing VFL to a white supremacist group as well as its attempts to censor external links on VFL’s website.

The SGA Judiciary Committee is scheduled to hear VFL’s appeal to be recognized as a student group on Tuesday, April 9th at 5pm. The Thomas More Law Center, a national public interest law firm based in Ann Arbor whose mission includes defending the sanctity of human life, has been retained by VFL and will be submitting a letter supporting their application to the SGA Judiciary Committee.  We will keep you updated as this story develops.