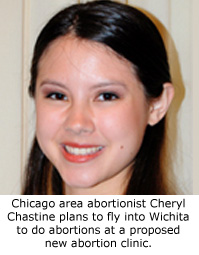 Share this story:
Through an undercover investigation conducted by Operation Rescue, it has been learned that Chicago area abortionist Cheryl Chastine has made plans to fly to Wichita to provide abortions at South Wind Women’s Center, a proposed new abortion clinic located in George Tiller’s former abortion building on East Kellogg.

Chastine, 31, graduated from the University of Kentucky College of Medicine in 2009. She was first licensed to practice medicine in Illinois in August, 2011 and obtained licensure in Kansas on January 17, 2013. Chastine currently works at Total Wellness, Inc. in Oak Park, Illinois, a suburb of Chicago.

In what appears to be a “bait and switch” tactic, Chastine has filed to open a Professional Association under the name “Wichita Medical Center” at the same address as the proposed South Wind Women’s Center, operated by former Tiller lobbyist Julie Burkhart, who has no medical license or training.

“It appears that there will be a public name for clinic and a secret name under which Chastine and perhaps others will operate,” said Troy Newman, President of Operation Rescue and Pro-Life Nation. “This raises legal questions that we are now exploring. The whole thing is less than above board, to say the least.”

In recording made by an investigator posing as a reporter, Chastine she appears to have very little understanding of Kansas law, which requires that the name of the physician be given to women at least 24 hours before an abortion and be listed on the informed consent document, which is usually downloaded from the clinic’s web site. 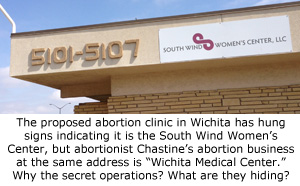 ad been hoping not to be mentioned by name,” Chastine said. She seemed completely unprepared for the fact that someone would eventually discover her identity.

“Ms. Chastine apparently thinks she can come to Wichita, kill babies surreptitiously then return home to her non-abortion patients in Chicago with no one the wiser. Now, we’ve uncovered her shadow business that will operate under a secret name at a facility that is not properly sanctioned,” said Newman. “These duplicitous business transactions coupled with her shocking inexperience as a licensed physician raise questions about whether her shady business dealings will be a reflection of what we can expect from her abortion practices.”

It was widely reported that South Wind Women’s Center would open sometime this week, but given the legal questions raised by Chastine’s secret abortion clinic and Burkhart’s unlicensed one, that may not be a sure thing.

Listen to the undercover recording