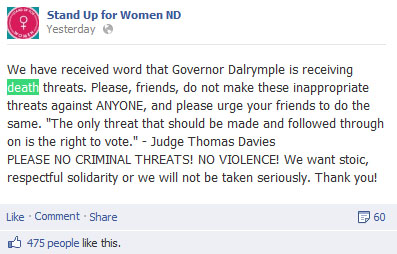 The governor of North Dakota is facing death threats following his signing of a bill that would ban abortions after 6 weeks of pregnancy and another to stop abortions on disabled babies.

According to “Stand up for Women ND,” a Facebook group created to oppose the new abortion legislation and personhood amendment in North Dakota, Governor Dalrymple is receiving death threats from pro-abortion activists after signing three anti-abortion laws passed by the North Dakota House and Senate.

The group Personhood USA informed LifeNews of the death threats and said, after posting several negative comments about Governor Dalrymple, Stand up for Women ND stated, “We have received word that Governor Dalrymple is receiving death threats.” The post went on to plead with supporters of the pro-abortion cause to cease the criminal threats, closing with “We want stoic, respectful solidarity or we will not be taken seriously.”

But the group said abortion backers “did not express any concern for the life and health of Governor Dalrymple.”

“Abortion is an act of violence against women and children, so death threats from pro-choice enthusiasts are not surprising,” stated Jennifer Mason, of PUSA.

She added: “It seems that Planned Parenthood and the ACLU hope to deter any and all restrictions to abortion with the threat of multi-million dollar lawsuits — despite the fact that they already receive millions of dollars in taxpayer money. Planned Parenthood exacts a terrible toll from women — their health, the lives of their children, and more — not to mention that if they file lawsuits in North Dakota they could be costing millions in additional taxpayer dollars. US citizens are fed up with paying Planned Parenthood. We should not be required to pay for abortions or frivolous lawsuits.”

She said her group decries all violence — in the womb or out of it.

“When the threat of lawsuits isn’t enough to force their agenda, it seems that pro-choice supporters think that death threats will accomplish their goals. These threats are deplorable,” continued Mason. “North Dakota legislators should not have to fear outrageous lawsuits for voting pro-life, nor should they have to fear for their lives.”

Mason said the death threats against the North Dakota Governor and pro-life North Dakota legislators come on the heels of threats of lawsuits in the state. A Tuesday article from RH Reality Check began by stating, “If the idea of long and expensive legal battles was supposed to dissuade North Dakota Gov. Jack Dalrymple from signing into law some of the country’s most restrictive abortion measures, it didn’t work.”