Our society is obsessed with talking about sex, regardless if you’re having it or not. Take for instance the recent March cover of People magazine, which featured the title, “Bachelor’s Sean & Catherine, Waiting for Our Wedding night.” To make things a bit clearer, they added below the title, “No sex until ‘I do.’” The cover may intrigue those who scratch their heads, wondering in earnest why anyone would (gasp) wait to have sex.

I’m not a fan of The Bachelor. Twenty-plus girls making out with one guy who professes his love to multiple ladies isn’t my cup of tea. Nevertheless, I think it’s interesting that America is so intrigued by Sean’s “born-again virgin” status. A “BAV” in Sean’s definition stands for someone who’s had sex in the past but no longer chooses to. A common and accepted word for that lifestyle choice is “celibate.”

In 2012, 29-year-old Olympic track star Lola Jones made headlines for this statement about her virginity:

It’s just something, a gift that I want to give to my husband. But please understand this journey has been hard. If there’s virgins out there, I just want to let them know, it’s the hardest thing I’ve ever done in my life. Harder than training for the Olympics, harder than graduating from college, it’s been to stay a virgin before marriage.

While Lola’s decision was respected by some, others openly mocked her for it. The Blaze reports:

After Jones came in fourth place during the finals of the 100-meter hurdles on Tuesday, many Twitter users started talking about her sex life. Using the loss as an opportunity to lambaste the athlete, they seemed to allege that, had she been sexually active, perhaps she would have performed better at the Olympics.

Football star Tim Tebow is considered one of sport’s most famous virgins. Ashley Madison (the despicable website that sets up adulterous affairs) offered 1 million dollars to anyone who could offer proof of having had sex with Tebow. CEO and Founder Noel Biderman said in a news release:

“Sports and sex (and of course, infidelity) go hand in hand. If Mr. Tebow is indeed abstaining from adult relationships, I would encourage him to find a nice lady or two and enjoy his youth and fame as much as possible.

“We are beyond the days where pre-marital sex has a social stigma, and it is my hope that soon we will also feel the same about infidelity.”

Biderman may be partly right in his assumptions that we’re beyond the days where premarital sex has a social stigma. However, his million-dollar bounty was never claimed. That proves there are still people in the world who value waiting for marriage. 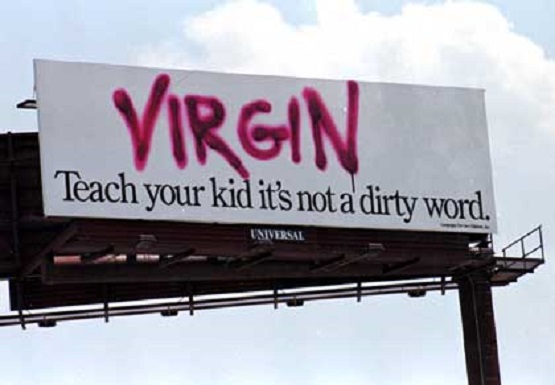 The Washington Times reports these facts on teenagers and sexual activity:

According to a 2011 survey from the National Center for Health Statistics, 68 percent of boys and 67 percent of girls between the ages of 15 and 17 have never had sexual intercourse. A 2009 survey commissioned by government agencies including the Department of Health and Human Services further found that adolescents opposed pre-marital sexual intercourse both in general and for themselves, with 53 percent strongly or somewhat agreeing that it’s against their values to have sex before marriage and 62 percent strongly or somewhat agreeing that sex is something only married people should do.

I find the efforts of one group super-encouraging. Pinky Promise is a movement comprising 9,000-plus mostly minority women who’ve committed themselves to abstain from sex before marriage if they’re single and stay faithful to their spouses if already married.

Some people believe that waiting ’til marriage is a joke. Comedian Chelsea Handler recently made news for the rude comments she made assuming Taylor Swift’s multiple break-ups were the result of her being a virgin who refuses to give it up. Chelsea, who wrote the book My Horizontal Love Life: A Collection of One-Night Stands, has no problem sharing her sexcapades with the world, yet she thinks virginity is a laughing matter.

Abstaining from sex is a decision that should be respected. People who chose abstinence are making a brave choice. I’m a 31-year-old woman who’s proud to admit I’m a virgin who’s waiting for my wedding night to have sex. I wholeheartedly support abstinence education because I believe that it teaches people valuable lessons on self-worth, self-discipline, patience, commitment, loyalty, and responsibility.

Even Planned Parenthood has to admit that abstinence has its benefits. On their website, they share these questions and answers:

There are few disadvantages to abstinence.

Planned Parenthood obviously doesn’t believe that abstinence is the best route to take before marriage. They see it as just one choice among many. The organization opposes abstinence-only education and promotes birth control and abortion. Planned Parenthood talks about abstinence but its message is directed mostly towards teenagers.

Turning 18 or even 21 doesn’t automatically mean you’re ready to engage in sexual activity. Women and men in their 20s and 30s still suffer physical and emotional consequences from sex outside a committed marriage. A wise man once said there are no condoms to protect the human heart.

Sex is a beautiful and powerful gift. I believe that it is best shared in the intimate and secure setting of a marriage relationship. If you’re a virgin, or even a “BAV,” as The Bachelor said, don’t lose heart. Your decision to abstain may make you the brunt of people’s jokes, but it’s a sacred choice you should never be ashamed of.

LifeNews Note:  Christinia Martin writes for Live Action News and this column has been reprinted with permission.