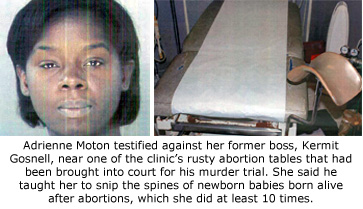 A macabre drama is unfolding in a Philadelphia court room as testimony is now underway in one of the most horrific serial killer cases in U.S. history. On trial for eight counts of murder and a host of other criminal charges is late-term abortionist Kermit Gosnell, who is accused of birthing viable late-term babies alive, then snipping their spinal cords with scissors amidst appallingly squalid conditions.

Since Judge Jeffrey P. Minehart ruled that prosecutors could not take the jury to see the squalor that has been preserved at Gosnell’s West Philadelphia abortion clinic, prosecutors have set up a replica of one of Gosnell’s procedure rooms complete with rusty, aging obstetrical equipment.

It was in the midst of that abortion room mock-up that, the first employee to testify tearfully explained to the jury how she cut the backs of the necks of at least ten live newborn babies then murdered them by snipping their spinal cords.

Adrienne Moton, 35, was a medical assistant who has been charged with the reduced crime of third degree murder in exchange for her testimony against Gosnell. She told the court that she moved in with the Gosnell and his third wife, Pearl, while still in high school due to “family problems” and eventually ended up working at his clinic, earning ten dollars an hour under the table. At the clinic, without proper training, she would administer drugs, perform ultrasounds, assist with abortion procedures, and dispose of the aborted baby remains. 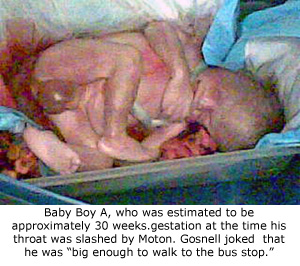 Moton also testified that she took photos of one particularly large baby, referred to by prosecutors as “Baby A,” with her cell phone that was estimated to be about 30-weeks gestation. Baby A had been delivered alive into a toilet where Moton said she cut the baby’s throat. Gosnell later joked that the baby was so large he could have walked to the bus stop.

News reports indicated that one female juror covered her mouth in horror as the photo of Baby A was displayed on the screen in the courtroom.

After Moton’s emotional testimony, the mother of that baby, Shayquana Abrams, 21, of Chester, took the stand. She said that Gosnell began her abortion in Delaware then had her report to his Pennsylvania clinic to finish what he told her was a 24-week abortion, even though she was closer to 30 weeks into her pregnancy. Her aunt paid Gosnell $2,750 in cash for the abortion. Abrams said she was so drugged that she has no memory of the actual abortion, which took place when she was only 17. Afterwards, her health began to deteriorate.

She suffered severe pain, heavy bleeding, nausea, vomiting, and the inability to walk, and was hospitalized for two weeks with a blood clot to the heart and a grapefruit-sized abscess on her right side. She still suffers ill effects of the abortion today, including fatigue, stress, headaches, and health issues.

“Ms. Abram’s story is indicative of experiences of women seeking abortions all over the country. They are given shoddy abortions with the help of unqualified workers and are not always told the truth about the gestational age of their pro-born babies,” said Troy Newman, President of Operation Rescue and Pro-Life Nation. “Then when they suffer complications, these women are on their own. Unfortunately, we have heard this story all too many times. Such substandard practices are epidemic at abortion clinic across America. We shudder to think of the abuses that continue at abortion clinics that just have not yet been caught.” 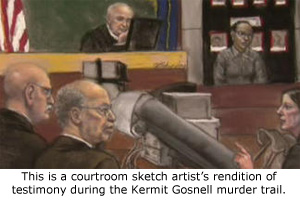 The defense is disputing that that any of the abortions took place beyond the 24 week limit in Pennsylvania or that any of the babies were born alive. Gosnell’s attorney, Jack McMahon, attempted to convince jurors that the babies were injected with digoxin, a drug that causes the pre-born baby to go into cardiac arrest, never survive the injections.

However, the Grand Jury report indicated that the medical examiner found no indication that the fetuses had been injected with Digoxin and the drug did not show up in the toxicology screens.

“Gosnell was not skillful enough to successfully administer digoxin, late-term babies continued to be born alive, and he continued to kill them by slitting their necks,” stated the report.

Also deeply disturbing is the defense’s primary arguments that the prosecution is “elitist and racist” and amounts to “a prosecutorial lynching” because Gosnell is Black and operated an urban abortion clinic that served poor women. This desperate attempt to manufacture racial motives for the prosecution rings hollow in light of the fact that the District Attorney, Seth Williams, who brought the charges against Gosnell, is also Black.

McMahon showed a particular insensitivity to women who were subjected to substandard abortions on rusty, bloodstained tables at Gosnell’s nasty mill where venereal diseases were spread through the reuse of dirty surgical instruments and the stench of cat urine and decomposing baby remains permeated the air.

“If you want Mayo Clinic standards, then you go to the Mayo Clinic,” he told the jury during opening arguments.

“Apparently Mr. McMahon doesn’t think that poor urban women are deserving of anything better than the dangerous practices and filthy conditions supplied by Gosnell,” said Newman. “His statement about clinic standards is grossly offensive. Even veterinarian clinics have to comply with basic health standards. It is appalling to think that anyone could make the argument that the dogs are deserving of better safety standards than women seeking abortions, no matter how misguided those actions might be.”

Operation Rescue will provide regular updates on the Gosnell murder trial from its unique perspective and has plans to attend the trial the week of April 1st, during which we will publish first-hand accounts of the proceedings. Additional grisly testimony is expected from nearly all Gosnell’s eight employees who were arrested and charged with him over the course of the six to eight week trial.

“This is an historic moment where the inner workings of an abortion clinic are being laid bare before the world. While every abortion clinic may not duplicate the full scope of Gosnell’s ‘house of horrors,’ nearly every one shares at least some of the characteristics of this revolting abortion operation,” said Newman. “This is a rare opportunity to expose the public to the dirty practices that typify abortion in America today.”