It’s the first Monday of this 40 Days for Life.

And Monday is the day when we report to you on lives that have been saved from abortion thus far during this campaign … but first I have a special surprise for you!

You can instantly download the “Day 6″ chapter of the brand-new 40 Days for Life book (in PDF format) — FREE! 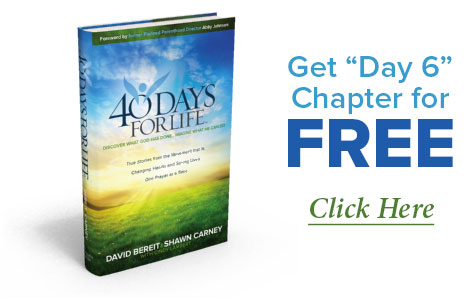 The chapter tells the riveting story of a life saved from abortion at the last possible second — and is the chapter about which we’ve received the most positive feedback. It will bless the start of your week!

Every life saved through 40 Days for Life is due to two things:

And the “Day 6″ chapter reveals that powerfully. Enjoy!

Now, here’s the report on some of the 47 lives saved thus far — that we know of — during this campaign.

“Through your prayers and the efforts of people just like you on the sidewalk we’ve seen three women leave the Planned Parenthood abortion facility today, not getting abortions,” said Brian, the 40 Days for Life coordinator in St. Louis — and that happened just in the first few hours of Day 1!

“One young couple walked right past the prayer volunteers and sidewalk counselor, but just 10 minutes later they walked out looking for some help,” he said. A counselor took a few minutes with them and found out she was pregnant. The young woman was, however, open to other options.

Brian said the counselor “was able to escort this young couple over to our friends at the mobile medical center right across the street to receive all the help they needed to choose life.”

Terri in Bakersfield shared the story of a young woman who drove more than an hour — by herself — for an RU-486 abortion.

The woman speaks Spanish — but Terri only knows a few words in the language. Thankfully, among the prayer volunteers were several who are fluent in Spanish and quickly offered to help.

The volunteers were able to tell the woman that they loved her — and loved her baby. “At first, she was stone faced,” Terri said, “but when one of the prayer ladies started crying, tears ran down her face!”

A few minutes later, a family with two small children introduced themselves to the young woman, “which melted her heart even more!”

The volunteers were able to offer assistance — baby gifts, gas money … and even the possibility of a place for her to live — “and a lot of hugs,” Terri added. “She left thanking us with a big smile and a grateful heart.”

The day before the campaign started, Ernie in Pensacola received a new report of abortion numbers for Escambia County, the county in which Pensacola is located.

“Through your faithful witness, prayer, fasting and the grace of God, we have observed a 38% drop in the number of abortions in Pensacola since the start of 40 Days for Life,” Ernie said. “Praise be to God!”