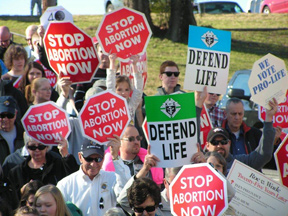 National Right to Life News brings the following stories of pro-life advocates rallying against abortions across the country at pro-life events.

Today’s 2013 Minnesota Citizens Concerned for Life (MCCL) March for Life marked the 40th anniversary of the U.S. Supreme Court’s Jan. 22, 1973, Roe v. Wade and Doe v. Bolton decisions that have resulted in the deaths of more than 578,000 unborn Minnesota children (Minnesota Department of Health), and more than 55 million unborn babies nationwide. A brief history of MCCL’s early marches is available at www.mccl.org.

“The State of Minnesota pays for abortions and it is time to stop it,” said MCCL Executive Committee member Cathy Blaeser. “This year we are calling again for the Legislature to ban taxpayer funded abortions!”

A total of 59 state legislators attended the March for Life and were introduced by MCCL as the crowd applauded.

Minnesota’s pro-life Congressional delegation was in Washington, D.C., today, but each of them sent greetings to the crowd. “I believe life begins at conception,” wrote Congressman John Kline. “Accordingly, I believe taxpayer dollars should not be used to fund abortion or support groups who provide such services.” He has cosponsored a bill to ban federal funding of abortion providers.

“Nothing is more important than life and we need to use our votes and our voices and our energy and our faith and our friendships to protect the primacy of life,” said Congressman Erik Paulsen.

“I want to commend Minnesota Citizens Concerned for Life for its noble mission on behalf of the most vulnerable among us,” wrote Congresswoman Michele Bachmann. “I am proud to stand side by side with all of you in defending life.”

Congressman Collin Peterson pledged to continue working to pass pro-life policies. “Thank you for your efforts in defense of human life . . . I will continue to work with you on these important issues.”

Members of Silent No More Minnesota, which offers hope and healing to post-abortive women and men, held signs expressing regret over their abortions and offering hope to others.

The 35th Annual Arkansas March for Life was held Sunday, January 20, 2013 at 2:00 p.m. at the state capital in Little Rock, Arkansas. To observe the 40th anniversary of Roe v. Wade, participants marched from behind the State Capitol about 4 blocks, split into two groups to surround the Capitol building before uniting as one on the front steps for our program.

Black 40 “NO MORE” Ribbons were distributed to participants to wear throughout the year to educate about the issue of abortion. The program included Father Tom Keller, pastor of St. Rose Catholic Church, and Pastor Happy Caldwell of Agape Church.
The keynote address was delivered by Mr. Paul Greenberg, editor of the editorial page for the Arkansas Democrat-Gazette, who spoke eloquently of his conversion to the pro-life cause. That conversion, he explained, was greatly aided many years ago by the Rev. Mike Huckabee (later Gov. Huckabee) when they traded editorials in the local newspaper on the divisive issue of abortion. Truth won out and what a wonderful convert to the pro-life movement Paul Greenberg has proven to be.
Rose Mimms, executive director of Arkansas Right to Life, shared the toll abortion has taken in our country, using 18 black balloons with the names of the 18 states whose population equals the 55 million abortions performed in the last 40 years. Over 100,000 lives have been lost in Arkansas alone. As she read the names of the states, balloons were released one by one. She also shared the number of those lives lost by age.
Hannah Trice read the poem by Catherine Walsh, “Will you sing me a Lullaby before I go.” Wayne Mays, president of Arkansas Right to Life, encouraged membership and support of the educational programs offered by Arkansas RTL.
—

Thousands of pro-lifers gathered in rallies around Oregon to commemorate 40 years of legalized abortion under Roe v. Wade. The state rally, held at Portland’s Pioneer Courthouse Square was predominately students and young adults.

A huge roar erupted from the crowd when the NW Students for Life Coordinator asked all those under 30 to give a shout out.

The state rally began with 55 bells tolling in remembrance of the 55 millions babies lost to abortion. Booths were filled by representatives of various pro-life groups from around the state, a spirited band played, and children carried balloons supporting LIFE in celebration of the lives of those babies who have been saved by the good works of pro-lifers.

Even in Oregon, abortion rates, rations and numbers are at an all-time low, which gives pro-lifers a lot to celebrate in the midst of sorrow.
—

40 of the over 100 pro-life legislators in Kansas slipped out of committee hearings to greet the Rally crowd at the state Capitol. Pro-life Gov. Sam Brownback is on the right.

On Tuesday 2,500 citizens, young and old–mostly young–attended educational workshops, religious services, and a capitol steps rally to commemorate the 40th anniversary of Roe vs. Wade.

Pro-life Governor Sam Brownback, who has signed several important pro-life bills into law since taking office in 2010, joined 1,800 Catholic young people for Mass at the Topeka Performing Arts Center, ate lunch with them and those who attended a Protestant service in another room, and then marched with them all to the south capitol steps for a rally he addressed.

On the landing of the steps used as the rally stage, Kansans for Life state executive director Mary Kay Culp gave a short speech and told the large audience that they would next be hearing from one of the marchers, a fellow named Sam…..Brownback! In his remarks, Gov.Brownback spoke of the joy found in serving others and the joy of being pro-life. He asked the marchers if they were ever going to quit fighting for life, to which they responded with a resounding NO!

Next, Kansans for Life Development Director, David Gittrich acknowledged individually the more than 40 state legislators who appeared on stage, and handed out prizes to students who had won this year’s elementary school pro-life poster contest.

After the closing prayer by Fr. Nick Blaha, chaplain of Hayden High School, Culp went to the podium to report that there were two other marchers in the crowd that deserved recognition: Catholic Bishop Michael Jaekels of Wichita and Catholic Archbishop Joseph Naumann of Kansas City in Kansas!

Culp told the audience, “The cover of the new Time Magazine says that our opponents won a big victory 40 years ago with Roe v. Wade, then says ‘They’ve Been Losing Ever Since.’ Pro-life organizations, pro-life churches, pro-life crisis pregnancy centers, pro-life schools—all represented here today are a major reason they are losing and we are winning, and we thank you!