Over the weekend, what has been billed as the largest pro-life rally in the history of Ireland took place as more than 30,000 pro-life people gathered to hold political leaders accountable for pledging to oppose abortion.

The Pro Life Campaign said it was “absolutely thrilled” with the turnout for the Unite for Life Vigil which drew a crowd of well over 30,000.

“On a bitterly cold January afternoon when it was predicted that the weather would keep people away, Irish people turned out in many thousands to register their opposition to abortion legislation,” PLC Legal Advisor Caroline Simons said.

Simons told the crowd that claims by the Government that abortion was needed to treat threatened suicide in pregnancy had been “completely demolished at last week’s Oireachtas hearings on abortion”.

“If the Government legislates for abortion on the basis of the X case, this legislation would cure no woman of suicidal ideation, but it would put some women’s lives at risk,” she said.

Simons said pro-abortion activists worldwide view Ireland as the “jewel in the crown” of the pro-life movement.

“We are a beacon for the pro-life movement everywhere. Let’s fight to keep that light shining,” she said.

Also speaking before the crowd, popular Irish figure and football manager Mickey Harte said that “Quite frankly I am most concerned that this Government proposes to legislate for abortion”.

“Ireland is almost unique in the Western world in looking out for, and fully protecting, two patients during a pregnancy – a mother and her unborn child,” he said.  “We are here to oppose the unjust targeting of even one unborn child’s life in circumstances that have nothing to do with genuine life-saving medical interventions”.

Referring to the high standard of medical care in pregnancy, he said this high standard needs to “remain enshrined in our laws not undermined or diluted in any way”.

He continued: “No individual or nation is perfect – we all have our faults and failings but when it comes to life before birth, we have a value system, an ethos which we should proudly share with the rest of the world.

Harte urged those at the vigil to “keep in touch with Mr Kenny and Mr Gilmore and let them know repeatedly that the middle ground of Irish opinion opposes what they are proposing. 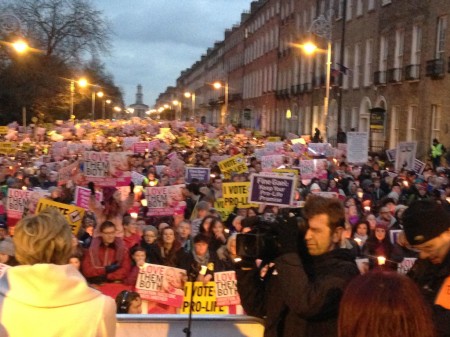 Niamh Ui Bhriain of the Life Institute told the crowd that “Fine Gael are pressing to legalize the direct and intentional killing of children on the grounds of suicide” and that “we are here to remind them that votes are transferable things – and that on the issue of abortion the people are not for turning.”

“They should, as that great patriot Patrick Pearse said, beware of the risen people who would take what you would not give,” Bhriain said. “Because if Fine Gael don’t protect life, they will truly have awoken a sleeping giant. They will have crossed the line for the pro-life majority. And today we pledge to Fine Gael that if they break their pro-life promise they will never get our votes again.”

The pro-life spokeswoman told the crowd that the British David Steele, who is described as the architect of the British Abortion Act recently said ‘I never envisaged there would be so many abortions.”

“Is that what Fine Gael want? To be the party that looks back and says, ‘We never envisaged there would be so many abortions’? ” she asked.

She urged Fine Gael to take the opportunity to do the right thing. “To stand with the people, to stand for mothers and babies, to have the courage to stand on the world stage, and be leaders in protecting human life.”

The Vigil for Life was organized by a coalition of pro-life groups including Youth Defence, the Pro-Life Campaign, Life Institute, and Family and Life.