This month marks the 40th anniversary of Roe v. Wade. Once again on January 22nd, tens of thousands will march on Washington to commemorate the little ones whose blood drenches our poor country. We will march and pray for an end to the American holocaust – and we will remember. We must remember because memory is the gift future generations give to the martyred victims of the past.

In his 1986 Nobel Peace Prize lecture, Holocaust survivor Elie Wiesel emphasized the importance of remembering even when memories are so painful one longs to forget. He reminded his listeners of a Jewish historian, Shimon Dubnov who exhorted his companions in the Riga ghetto, most of whom were killed under the Third Reich’s policy of racial genocide, to “write it all down.” Wiesel tells us:

Overnight, countless victims became chroniclers and historians in the ghettos, even in the death camps. Even members of the Sonderkommandos, those inmates forced to burn their fellow inmates’ corpses before being burned in turn, left behind extraordinary documents. To testify became an obsession. They left us poems and letters, diaries and fragments of novels, some known throughout the world, others still unpublished.

The response to great atrocities, whether the Holocaust during World War II, the Rwandan massacres, or our own American Abortion Holocaust must be to remember. As Wiesel said, “We must remember the suffering…[and] struggle to invent a thousand and one reasons to hope.” The stories, especially those of hope,  not only respect the victims of the past, they give courage to new generations fighting to overcome the darkness of the present.

And so, I have a story to tell, a story of hope, a thirty-five year old story from the early days of the abortion holocaust when a handful of activists were trying to wake up the country, but primarily trying to save babies, one at a time, from the extermination camps on American soil.

My story begins on a hot July morning in 1977, a decade before the large protests of Operation Rescue in the late ’80s and early ’90s. Small groups of pro-lifers were “sitting in” at abortion mills around the country trying to save the babies in danger of imminent death. I was part of that early movement because, as a young mother of tiny children, my heart was wrenched by the murder of babies I considered siblings to my own. And so our little band went to the abortion mill of a man instrumental in overturning Washington, D.C.’s law against abortion, a man who set the stage and helped bring about Roe v. Wade.

Milan Vuitch was a Serbian immigrant, a member of the back alley butchers society who performed illegal abortions in his basement for years before legalization.While feminists portrayed illegal abortion with coat hangars, in reality many abortionists were doctors moonlighting on the side. Vuitch openly bragged about his actions and was arrested numerous times in D.C. without ever serving a  day in jail. After abortion was legalized, he simply moved his shingle from the back alley to an office building on I Street and named his mill the Laurel Clinic. But Vuitch continued to provide unsafe “back alley” services. After Roe guaranteed “safe legal abortions,” Vuitch killed two women, 17-year-old Wilma Harris in 1974 and 32-year-old Georgianna English in 1980 and he maimed many others. Vuitch, in fact, continued to be a controversial figure. In 1984, WDVM-TV won a Peabody Award for an expose by reporter Mark Feldstein showing numerous medical violations at the Laurel Clinic including filthy instruments, using questionable anesthesia drugs, and other dangerous practices. On one occasion Vuitch even sent a 17-year-old home with an incomplete abortion telling her to return with $400 before he would finish the procedure. He also instructed her not to go to the hospital, but she collapsed and was taken to the emergency room where she delivered a six-month-old premature baby who later died. 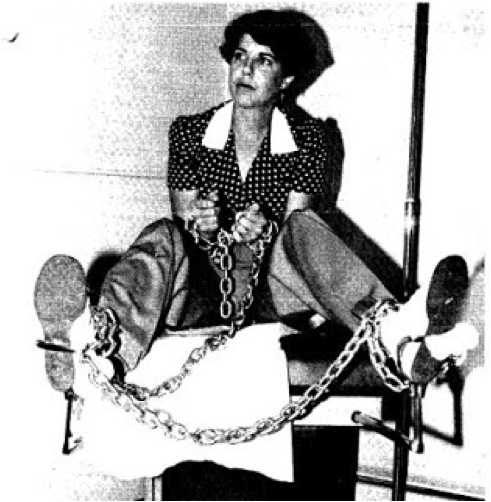 Vuitch always postured as a man holding the moral high ground claiming he only aborted for “medical reasons,” but it wasn’t true. He would abort for no reason or any reason. During the WDVM investigation, Feldstein had a female associate go for a pregnancy test using his urine. Vuitch staff told her she was, indeed, pregnant. It was all about the money!

Even before all this information came to light, Vuitch was notorious enough for our group to choose his facility for the sit-in. The plan that day included delaying our removal as long as possible giving pro-life counselors time to offer help and information to the mothers. How? By not only blocking the abortion rooms, but chaining ourselves to the tables.

We met at nearby St. Matthew’s Cathedral for Mass and prayed the mothers would choose life for their babies. Then we moved on to the “clinic” with chains and padlocks. Three women, myself included, were chained to operating tables in the abortion rooms. When asked later by media why we chained ourselves, I said the chains not only made it harder to remove us, but symbolized what abortion does to women, making them recyclable sex objects chained to the Playboy mentality.

During the sit-in one young woman left the clinic in tears. Her name was Linda and she met my friend Brigid among those picketing outside. Linda didn’t really want an abortion. Like many women, she felt forced by her circumstances. She told Brigid she knew the clinic staff were lying to her when they said the baby was “just a clump of cells.” Our presence and encouragement was all she needed to change her mind. Linda not only chose life for her baby that day, she later asked Brigid to be her little girl’s Godmother. And Baby Tee received a special gift from God. She was born on the fifth anniversary of Roe v. Wade, January 22, 1978, a confirmation of life on an anniversary of death. 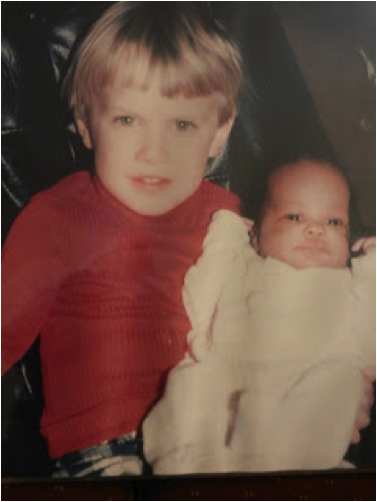 So on January 22nd, 2013, the 40th anniversary of one of the blackest days in American history, a blaze of birthday candles will light up a cake. Tee will be 35 years old. Her birth was the end of a chapter on the impact of the early sit-ins, but only the beginning of a chapter on life and hope. Baby Tee made visible the reason we risked arrest and went to jail. Her life was more than worth it. But that isn’t quite the end of the story. I had the privilege of babysitting for Tee one day and snapped a photo of her sitting on my son Neil’s lap, two little children beloved by God and their mothers.

A quote from the Talmud reads, “Whoever destroys a soul, it is considered as if he destroyed an entire world. And whoever saves a life, it is considered as if he saved an entire world.” The American abortion tragedy can be summed up in that quote. There are millions of stories of abortion, one for every baby killed and every baby who survives, one for every mother who chooses life and every mother who chooses death. There are stories for the abortionists and clinic workers who repent and there are stories for the pro-lifers who picket and counsel, who staff crisis pregnancy centers, and preach the truth to the culture of death.

We need to write those stories down and remember. As Elie Wiesel said, “I remember the killers, I remember the victims…. There may be times when we are powerless to prevent injustice, but there must never be a time when we fail to protest.” And that’s why the pro-life movement will win in the end. Because those who stand for life will remember and protest. We will never give up or give in. We will never forget and we will never allow society to forget either, because to save one child is to save the whole world!

LifeNews Note: Mary Ann Kreitzer is a co-founder of Les Femmes and the Catholic Media Coalition, organizations that defend the authentic Catholic Faith. She is a master catechist, a long-time pro-life activist, and a former Natural Family Planning teacher. She writes from the Shenendoah Valley of Virginia. This originally appeared at Catholic Sistas and is reprinted with permission.