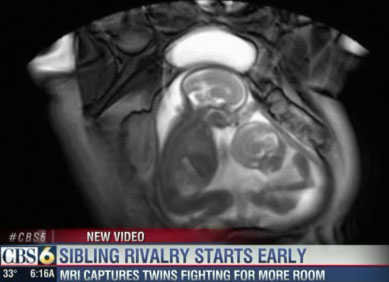 A new video is making the rounds on the Internet showing MRI images of twins that doctors are “fighting” in the womb. The amazing video, showing evidence of the humanity of babies before birth, came as researchers were trying to find out more about a rare blood disease that can complicate pregnancies called twin-to-twin transfusion syndrome.

The video from scientists at London’s Center for Fetal Care shows two babies essentially pushing each other.

Thomas Peters of CatholicVote commented on the new video, saying the line explaining this video as “sibling rivalry starts early–even before birth” misses one point.

“Our President thinks these two unborn human beings can be exterminated if their mother decides she doesn’t want them anymore. Hundreds of politicians, media pundits and entertainers agree that these little human beings have no right to life,” Peters adds. “This isn’t a story about “sibling rivalry.” It’s a tragic tale about our culture’s choice to ignore the obvious.”