1. They endanger women.
Although Planned Parenthood has tried very hard to rebrand as a compassionate champion of women’s health, their political lobbying efforts paint a very different picture. In their mission to protect abortion “rights,” they’ve thrown the very women they claim to serve under the bus.

In many states, Planned Parenthood is on record as opposing legislation that would require abortionists to disclose the risks associated with abortion, laws that would require a physician to be present at abortion centers at all times, and even a move that would simply require hallways to be wide enough to accommodate a gurney in case of an emergency. These are only a few examples.
2. They’re expensive.
In Texas, Planned Parenthood is one of the most expensive providers in the Women’s Health Program, charging the state of Texas 43 percent more per client than other providers, according to the Texas Health and Human Services Commission.
They also happen to be the provider most bloated with taxpayer funds. Planned Parenthood represents less than one percent of the providers enrolled in the Women’s Health Program, yet they have managed to swipe 40 percent of the program’s entire budget. That means that 23 Planned Parenthood centers get $16 million, while the rest of the 4,182 clinics enrolled in the program are left to scrape up what’s left.

3. They’re dishonest.
Waste and potential fraud has been identified in Planned Parenthood affiliates in Texas, California, New Jersey, New York, Illinois, and Washington state by Pro-Life group Alliance Defending Freedom. One Planned Parenthood affiliate in Iowa has already agreed to pay back some of the funds they overbilled the state for when they were reimbursed for birth control through Medicaid.
4. Their abortions and government funding are one and the same.
If this isn’t reason to defund Planned Parenthood, I don’t know what is. A recent statistical analysis spanning the past decade clearly shows that as Planned Parenthood’s government subsidies increase, so do their abortions. Study this chart by financial analyst, Keith Riler: 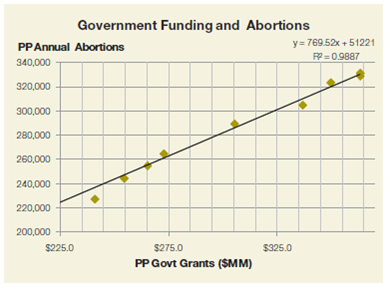 This chart — covering 2001 to 2010 — shows a 99 percent correlation between Planned Parenthood’s government subsidies and the number of abortions committed. Riler told Texas Right to Life that “these results contradict the oft-heard wisdom that Planned Parenthood’s government support is unrelated to its abortion business. But at a 99 percent correlation, the funding and abortions are statistically one and the same.”

LifeNews Note: Rachel Bohannon is a spokeswoman for Texas Right to Life.