One study, co-authored by Elliot Institute director Dr. David Reardon, found that women who undergo abortions have an increased risk of death:

A single induced abortion increases the risk of maternal death by 45 percent compared to women with no history of abortion, according to a new study of all women of reproductive age in Denmark over a 25 year period.

In addition, each additional abortion is associated with an even higher death rate. Women who had two abortions were 114 percent more likely to die during the period examined, and women had three or more abortions had a 192 percent increased risk of death. …

“We knew from our previous studies of low income women in California that women who have multiple pregnancy outcomes, such as having a history of both abortion and miscarriage, have significantly different mortality rates,” Reardon said. “But this new study is the first to examine how each experience with abortion or miscarriage contributes to higher mortality rates.”

This is called a “dose effect” because “each exposure, or ‘dose,’ is seen to produce more of the same effect, which is what one would expect if there is a cause-effect relationship,” Reardon explained.

The other new study found that women who undergo multiple abortions have an increased risk of preterm birth and low-birthweight babies in a subsequent pregnancy :

The study, printed in the peer-reviewed medical journal Human Reproduction, of more than 300,000 women found women who have three or more abortions face a 35 percent increase in health complications in a future pregnancy and also saw an increase in the risk of a baby’s death around the time of birth.Having just one abortion or more increased the likelihood of giving birth before reaching 37 weeks of pregnancy.

These two new studies follow a Chinese study, published in February of 2012, that found a “very statistically significant increased risk” of breast cancer for women with previous abortions, which increased for women with multiple abortions.

Past studies have also found an increased risk of psychological and physical problems related to multiple abortions. 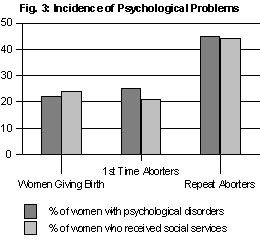 For example, a study published in the Journal of Psychosomatic Obstetrics and Gynecology found that while there was no significant difference in psychological disorders or use of social services between women carrying to term and those seeking abortion for the first time, women who had already had an abortion were almost twice as likely to have psychological disorders or to have had contact with the social service system (see table at right).[1]

Past research also suggests that repeat abortion may be both a result and a trigger of emotional and psychological problems. For example, women who had repeat abortions were found to be more likely to abuse drugs or alcohol, to be living in unstable situations, to be divorced or be dependent on social services. These are all factors that can lead to additional abortions: women with a prior abortion experience are four times more likely to abort a current pregnancy than those with no prior abortion history.[2]

This increased risk is associated with the prior abortion due to lowered self esteem, a conscious or unconscious desire for a replacement pregnancy, and increased sexual activity post-abortion. Subsequent abortions may occur because of conflicted desires to become pregnant and have a child and continued pressures to abort, such as abandonment by one’s partner. Aspects of self-punishment through repeated abortions are also reported. [3]

Access the world’s most extensive online library of studies on the physical and psychological effects of abortion at www.AbortionRisks.org.