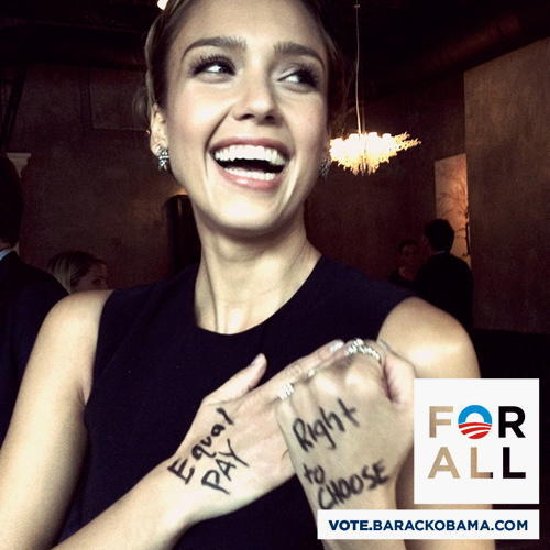 The Obama re-election campaign has a new “For All” campaign in which it is tapping celebrities to prop up the pro-abortion president’s re-election effort. Actresses Jessica Alba and Natalie Portman have stepped up to show their support for Obama, and abortion.

The campaign has Obama supporters posting photos online with their hands over their hearts exploiting the Pledge of Allegiance posture as a way to pledge support for Obama. But the two Hollywood stars take the pledge a step further by putting pro-abortion slogans on their hands, as evidenced by the pictures.

“Growing up, my classmates and I started every day with a ritual: We’d stand up, put our right hand over our hearts, and say the Pledge of Allegiance,” Alba says in the email to Obama campaign supporters. “To me, that gesture was a promise. A promise to be involved and engaged in this country’s future. A promise to work for liberty and justice — and for affordable education, health care, and equality — for all.”

“That’s why all across the country, people like you and I are proudly writing down our reasons for getting involved, and then taking the pledge — to vote,” she continues. “Make sure you’re ready to vote this fall. Putting your hand over your heart is making a promise. Casting your ballot is keeping it.” Portman recently appeared at a “Women for Obama” event in Las Vegas, to promote Obama and talk about her pro-abortion views. Portman encouraged women to get out the vote for Obama.

“Talk to everyone you know, tell your story, that’s how we can become positive,” Portman said. “Luckily we have a president who has so many positives that we can create this win by saying the great things he has done, not talking trash.”

Portman was particularly adamant about defending the “right to choose,” explaining her perspective as a mother.

“As a new mother – as all of you as mothers, its hard to hear, you know, the word ‘right to life.’ I think as our opponent because we all cherish life, we all love the miracle, the absolute wonder of what our bodies can do and what we are able to create, and we are lucky enough to be able to create as women.” Portman said.

“But we also know that losing our right to choose means that we put our sisters in jeopardy,” she warned. “It doesn’t end abortion, it just ends freedom to abortion and safe abortion.”

Portman also highlighted the rest of the President’s accomplishments, reminding the women that he had done enough to deserve re-election.

“I kept seeing his accomplishments and I wondered, ‘What more does he have to do to deserve four more years?” she said.