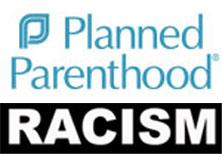 Rep. Tim Huelskamp R-Kansas, who has four adoptive children of African American, Hispanic, and Native American descent, said last Friday that Planned Parenthood was created for the sole purpose of killing children that look like his.

He’s right. Today in America, we all would like to believe that racism no longer exists, but that is just not the case. Although U.S. law prohibits discrimination on the basis of race in various contexts, including employment, education and housing, minority babies are still openly targeted and discriminated against.

Where’s the proof? It’s right in front of our faces.

In recent YouTube videos Planned Parenthood representatives were willing to accept racist donations, even to the point of being “excited” at the possibility of taking money specifically earmarked to kill a black baby. Planned Parenthood’s eager acceptance of these donations reflect the racist and eugenic principles of its founder; Margaret Sanger. Planned Parenthood’s abortion business mainly profits from the high number of abortions it provides — 37% of those abortions are done on black women.

In another recent video a Planned Parenthood abortionist screams that he aborts black babies because he considers black babies to be “ugly” and a dole on society.

Planned Parenthood is the nation’s largest abortion chain. It has planted its clinics strategically in our urban and minority neighborhoods. This is no accident! The Alan Guttmacher Institute, along with the Center for Disease Control and Prevention (CDC), show that a huge majority of abortion clinics are located in minority neighborhoods — experts estimate the number at higher than 75%.

Planned Parenthood’s founder Margaret Sanger, was very clear about her objective with her “Negro Project” (1939) which was specifically designed to stop the growth of the black community with sterilizations and abortion. She continued to grow her plan until her death in 1966. Sanger’s business plan for Planned Parenthood has not changed. Like they say: “If it ain’t broke…” Planned Parenthood is still a racist organization, and it continues to specifically target minorities for abortion destruction.

So, when Rep. Huelskamp criticized Obama and the Democrats for wanting to fund Planned Parenthood stating that Planned Parenthood was created for the sole purpose of killing children that look like his children — he was absolutely correct — and the National Black Pro-Life Union stands with him.

For those of us who serve God, we acknowledge that we are all made in HIS image — blessed is the fruit of the womb. God says children are a reward and a gift; therefore, we must also be courageous enough to stand with those who speak the truth.

Shame on President Obama and all others — Democrat and Republican, who support tax payer funding of Planned Parenthood.