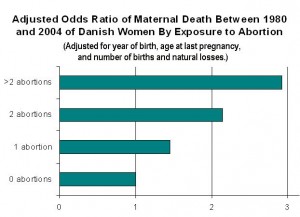 A single induced abortion increases the risk of maternal death by 45 percent compared to women with no history of abortion, according to a new study of all women of reproductive age in Denmark over a 25 year period.

In addition, each additional abortion is associated with an even higher death rate. Women who had two abortions were 114 percent more likely to die during the period examined, and women had three or more abortions had a 192 percent increased risk of death.

Elevated rates of death were also observed among women who experienced miscarriages, ectopic pregnancies or other natural losses.

Women with a history of successful deliveries were the least likely to die during the 25 years examined. Women who had never been pregnant had the highest mortality rate. 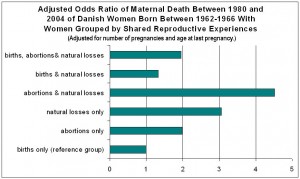 The study is the second record linkage analysis of Danish mortality data to be published this month. The earlier study was limited to comparing mortality rates following only the first pregnancy outcome. 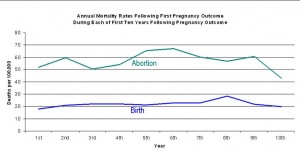 The finding that each additional abortion or other pregnancy loss contributed to a rising death rate is an indication that the observed effects are more likely to be causal than incidental, according to Dr. David Reardon, one of the co-authors of both studies.

“We knew from our previous studies of low income women in California that women who have multiple pregnancy outcomes, such as having a history of both abortion and miscarriage, have significantly different mortality rates,” Reardon said.  “But this new study is the first to examine how each experience with abortion or miscarriage contributes to higher mortality rates.”

This is called a “dose effect” because “each exposure, or ‘dose,’ is seen to produce more of the same effect, which is what one would expect if there is a cause-effect relationship,” Reardon explained.

Reardon is the director of the Elliot Institute, which funds research related to abortion. He believes further research is needed to explore how the outcomes observed in this latest study may be influenced by abortion’s impact on natural pregnancy losses. A new population study from Finland, for example, has found that abortion is associated with higher rates of preterm delivery, low birth weight delivery, and perinatal deaths in subsequent pregnancies.

Reardon believes that a truer picture of the benefits of childbirth and the risks of abortion and pregnancy loss is now emerging because of a shift to more reliable record linkage studies. Such studies have been conducted in Finland, Denmark and the United States.

Before these record linkage studies were available, efforts to compare the mortality rates associated with abortion and childbirth were usually based on death certificates alone. Reardon characterized those previous comparisons as “junk in, junk out” analyses because death certificates have been proven to be notoriously inaccurate in regard to women’s reproductive history, especially in regard to any history of abortion or miscarriage.

“Record linkage studies are the only way to use the same objective yard stick for comparing mortality rates associated with pregnancy outcomes,” he said. “More researchers and more research dollars should be expended on investigating these issues. Without it, population control efforts in developing countries may lead to ill-informed public health initiatives which will actually increase death rates among women rather than reduce them.”