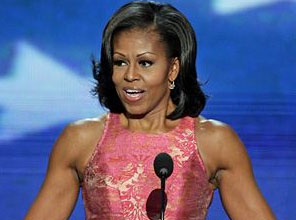 First Lady Michelle Obama made it clear just what President Barack Obama “stands for” as he campaigns for re-election to another four-year term in the White House:  abortion.

Although Obama never said the word, Democrats never do these days in a tacit acknowledgement to the fact that a majority of Americans are pro-life, Michelle Obama talked about how Barack promoted pro-abortion Obamacare as president and how he “stands for” abortion.

“When it comes to the health of our families, Barack refused to listen to all those folks who told him to leave health reform for another day, another president,” she said. “He didn’t care whether it was the easy thing to do politically — that’s not how he was raised — he cared that it was the right thing to do.”

“He did it because he believes that here in America, our grandparents should be able to afford their medicine. Our kids should be able to see a doctor when they’re sick and no one in this country should ever go broke because of an accident or illness,” she continued.

Obama concluded: “And he believes that women are more than capable of making our own choices about our bodies and our health care. “That’s what my husband stands for.”

In February 2004, Michelle Obama penned a fundraising letter to help her husband Barack raise funds for his Illinois-based Senate seat.

The letter contends the federal ban on partial-birth abortions “is clearly unconstitutional” and “a flawed law” — though the Supreme Court would later say the measure is constitutionally valid.

Michelle Obama continued that abortion advocacy as First Lady.She was in Florida in January for a private lunch reception with supporters of pro-abortion President Barack Obama’s re-election campaign. While there, she met with an activist from the Planned Parenthood abortion business. Before that, she hosted the president of Planned Parenthood’s abortion business at the White House.