Wednesday is late term abortion day at Orlando Women’s Center (the clinic where I had my abortions 12 years ago). When I first started visiting the sidewalks of abortion clinics to pray and minister, I had NO idea that late term abortions were even legal. I remember hearing about the Partial Birth Abortion Ban in 2007 and assumed (like most) that this stopped abortions late in a woman’s pregnancy.

Shock can’t even begin to describe my feeling when I first counseled on late term day. “These girls are SO pregnant”, I kept thinking to myself. Of course that’s silly since there’s no such thing as being a “little pregnant”, but I couldn’t get over the size of their beautiful bellies so full of LIFE. These women have felt their babies kick. Many of them even know the sex of the child and this is sometimes the reason for the abortion. These girls have carried these babies for 6 months. They are more than halfway done!

I just cried and cried. I couldn’t even speak at first. Not only is the size of their bellies overwhelming but the hardness of their hearts is just as shocking. I began to think about family members, friends, and co-workers of these girls who know they are pregnant. Is our society so lacking of accountability that they will return to their lives and no one will think this is a problem?

This past Wednesday my friend John posted a picture of a girl who arrived at OWC to abort her twin baby girls. She already had daughters and didn’t want anymore. She was about 20 weeks along, but because she was pregnant with twins, she had a BIG belly. Within a few hours, the picture went viral. I began to get phone calls & emails from friends who had no idea this was going on. Many offered financial help and MANY offered to adopt her babies. Thousands of people all of over the world were praying that this girl would change her mind…and thousands were saying the picture was a hoax or that what she was doing was illegal. 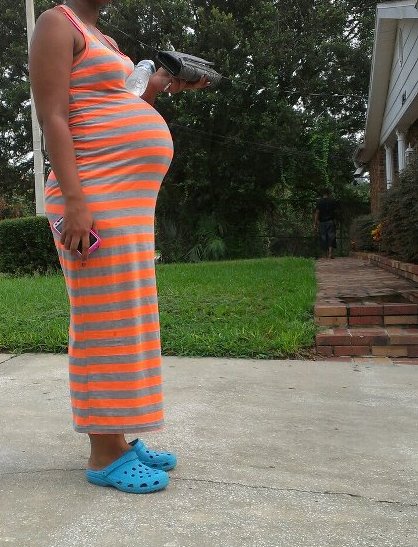 I found myself repeating over and over again, “Abortion is legal in America up to the day you give birth.” In fact, in our nation’s capital, there are 2 doctors who “specialize” in abortions this late in pregnancy. One of those doctors has been working with a suspended license for several years. The Partial Birth Abortion Ban only stopped the use of that procedure late in a woman’s pregnancy. Now, as long as the baby is dismembered BEFORE removing he or she from the womb, it’s perfectly legal. Look up the laws in your state. Keep in mind that any state that has exceptions for the health of the mother can mean that if a woman has bad heartburn that’s a threat to her health. A late term abortion starts around $2,000 and can go up to about $15,000 depending on how far along a woman is in her pregnancy.

I’ve been to the Holocaust Museum in Washington, DC. They have piles and piles of hair shaved off of Jews in the concentration camps. They have millions of pairs of shoes belonging to children who were killed simply because they were Jewish. The pictures of thousands of dead bodies piled on top of each other are shocking and appalling. At one point I decided I couldn’t look anymore. I was disgusted that this could happen without a revolution rising to overthrow a government that would accept murder as status quo.

I know it’s controversial to say this, but abortion truly is the holocaust of my generation. What if we had the bodies of 50,000,000 babies piled on top of each other in a museum somewhere? What if we took all of the clothes they will never wear and toys they will never play with and you had to pay to see them? If each of us had to watch a late term abortion, surely there would be a revolution, right?

After the Holocaust ended, German civilians were taken to Buchenwald concentration camp to see the atrocities that happened there. Over and over they were heard saying, “We didn’t know.” Now, because of the internet and social media, we have no excuse for ignorance. The hands of America are covered with blood…perhaps her eyes and ears are covered as well.

The girl I mentioned earlier ended up aborting the twin girls in her womb even though we had every kind of help she would ever need ready for her. She admitted that she didn’t want girls and that she had no compassion for the babies she was carrying. Through a 2 day process, she actually had to go into labor and deliver her sweet babies into a toilet. Abortions like these happen ALL over the country EVERYDAY.  I hope that this girl’s picture made many SO outraged that they are provoked to DO something. When I spend hours on the Planned Parenthood sidewalk alone, I want to cry out “WHERE IS THE CHURCH??”