Last week the Kansas State Board of Healing Arts posted the final revocation order for the medical license of abortionist Ann Kristin Neuhaus. While Neuhaus is not a household name, her revocation has national repercussions in the abortion battle.

Neuhaus was a former associate of George Tiller, who once operated the largest late-term abortion clinic outside Communist China. His business, which specialized in doing the latest of late-term abortions and drew clients from all over the globe, earned Wichita the dubious distinction as the Abortion Capital of the World.

After Neuhaus closed her own abortion business in Lawrence, she began working with Tiller to provide referrals for abortions on viable babies past 22-weeks gestation. Kansas law required that a second physician had to determine that post-viability abortions were medically necessary in that continuation of the pregnancy would result in maternal death or a “substantial and irreversible impairment to a major bodily function” of the pregnant woman. A former State Attorney General, Carla Stoval, issued an opinion that “major bodily function” must include mental health considerations.

Testimony at a Board disciplinary hearing showed that Neuhaus was regularly contacted by Tiller’s office and told to report to his Wichita abortion clinic where she conducted screenings on potential late-term abortion patients for the purpose of determining if they met the legal standard that would allow an abortion to continue. However, the Board found that Neuhaus negligently conducted those screenings. Her inadequate and poorly documented interviews led her to determine that normal life issues, such as frustration at not being able to buy a new computer, play sports, or participate in rock concerts due to pregnancies that had already advanced into the third trimester, were indications of mental illnesses that justified abortions. Many times, Neuhaus phoned in her exams. In some cases, there was no evidence that she even interviewed the patients at all.

Her mental health diagnoses were reached via a computer training program called “PsychManager Lite” wherein she would input answers to often vague yes-or-no questions and the program would calculate a diagnosis. Her phony diagnoses were rubber-stamps meant to ensure lucrative late-term abortions took place.

In short, her mental health justifications for late-term abortions were based on nothing short of medical quackery and blind radical abortion ideology.

To Neuhaus, an unexpected pregnancy caused women to become mentally ill without exception. She reflected the philosophy touted by many abortionists when she stated that she believed the fact that a woman was pregnant was in itself a life-threatening condition and justification for abortion at any stage of pregnancy.

Her revocation was a moral victory for the pro-life movement that has implications on several levels.

This case exposed the gross and deceptive exploitation of the “mental health” justification for abortions in states where such exceptions exist. It is a case in point for the need for legislatures to tighten mental health loophole that permit abortion through the ninth month of pregnancy for any reason whatsoever.

As a result of the late-term abortion scandal involving Tiller and Neuhaus, Kansas has changed its laws to prevent further abuses of mental health exceptions and ban abortions after 20 weeks.

Abortionists above the law

Neuhaus’ attitude that she was above the law exposed the thinking that is indicative of today’s abortion cartel.

“I’m here to comply with the law, but once I step into the clinic, my own priorities take precedence,” she stated.

Today’s headlines are replete with abortion clinics, such as those in Mississippi, Alabama, Pennsylvania, and Virginia that resist regulation and oversight while demanding that they should not have to comply with standards that others must achieve. This unwillingness to respect the law makes abortion clinics dangerous places for women because it strips away any protections that state laws attempt to provide.

Prevented from practicing in other states

Neuhaus stated in an interview with MSNBC that she was willing to do abortions in other states, once her disciplinary case was cleared. Her license revocation will make it nearly impossible for Neuhaus to obtain licensure in another state, thus protecting women around the nation from her shoddy abortion practices.

Neuhaus’ license revocation has likely thwarted efforts to reopen an abortion clinic in Wichita, which has been abortion-free since the closure of Tiller’s clinic in 2009. At the same time that a former Tiller spokesperson announced in 2010 the procurement of a medical director for her proposed Wichita abortion clinic, Neuhaus petitioned the Board to have her license status changed from “exempt” to “active.”

It was clear that Neuhaus planned to return to the abortion business. Her petition was deferred until after her revocation hearing, which has rendered her request moot. Since then, all efforts to open an abortion clinic in Wichita appear to have ceased. 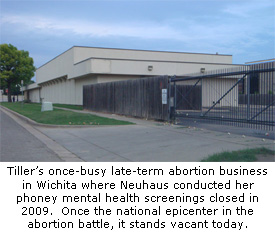 In spite of serious obstacles faced in procuring any kind of prosecution against Tiller and Neuhaus, including open governmental corruption and obstruction, in the end the system proved to have worked.

Much has been reported in the mainstream news of Tiller’s acquittal of criminal charges related to his improper business relationship with Neuhaus as the basis for vindication of Tiller and proof that he operated a legitimate abortion business. That is actually a misrepresentation of fact.

On the day Tiller was acquitted, the Kansas Board of Healing Arts released an 11-count petition charging Tiller with violations of the Healing Arts Act. That petition was based on evidence gathered during an investigation prompted by an Operation Rescue complaint – the same complaint that resulted in Neuhaus’ license revocation. That petition against him was pending at the time Tiller was regrettably murdered in 2009. In it, the Board called for discipline that included license revocation.

There is little doubt now that Tiller conducted late-term abortions under the guise of phony mental health justifications based on findings that were negligently determined by a now disgraced abortionist. His entire late-term abortion operation was little more than a scam that took the lives of viable, often health babies, for no legitimate medical reason in violation of the law.

If he had lived, Tiller’s medical license would likely have been revoked along with that of Neuhaus. It is regrettable that the process was not allowed to run its course in his case. If it had, Tiller would surely be alive today, but out of business just the same.

Neuhaus’s revocation is the result of new tactics employed by Operation Rescue that are now starting to be used by other pro-life groups.

There are many pro-life laws on the books, not to mention regulations that provide standards for medical conduct, health facilities, medical waste disposal, and billing practices. More and more, pro-life activists are documenting abortion abuses, filing the appropriate complaints, and demanding enforcement. We are using the law as a tool to prosecute abortionists, revoke medical licenses, fine and close abortion clinics, and most importantly, save lives.

Not only does this action reduce abortions but it also helps change public opinion about abortion and abortion clinics by documenting abortion abuses through official channels. Once the truth is told about the dangerous and exploitative nature of abortion clinics today, it becomes more difficult to politically justify protecting abortionists who violate the law.

Tiller and Neuhaus went from operating what was once considered the “best” late-term abortion clinic in the world to being disgraced quacks who exploited vulnerable women for financial and political gain. The end of Neuhaus’ medical career closes the book on Kansas’ long involvement as the World’s Abortion Capital and opens the doors for continued progress for the pro-life movement.

The Abortion Whistleblowers Program and AbortionDocs.org

Operation Rescue and Pro-Life Nation have two programs that can assist activists in the documentation of abortion abuses on the local level.

The Abortion Whistleblowers Program offers a reward of $25,000 for information leading to the arrest and conviction of abortionists that are breaking the law. Clinic workers are an excellent source of information and can use the money to help them come out of the abortion industry. For more information on this program and for reproducible flyers that can be distributed to the public please click here.

AbortionDocs.org is a searchable website that posts documentation of abortion abuses on abortion clinics and providers around the nation. It can be used by activists to document abuses in their areas as well as serve as a clearing house of information where pro-life supporters can share documentation they may have gathered to help propagate the truth about abortion abuses that are so rampant today. For more information, please visit AbortionDocs.org.

The Neuhaus revocation illustrates how effective Operation Rescue’s tactics have become and how they can be used nationwide to speed the end of Abortion in America.