Florida abortionist Walker L. Whaley died on May 31, 2012, at the age of 64, according to a two-sentence obituary printed in the Florida Times-Union. Local pro-life activist Michele Herzog told Operation Rescue that he died of a heart attack.

As usual, I did a little Internet research to confirm some facts before I wrote what I thought would be a brief article noting Whaley’s passing. What I found was a life’s history played out in public documents that pulled back the curtain on a crisis in the abortion industry – a crisis that is its Achilles Heel.

The documents paint an ugly portrait of what we have found is typical of abortionists everywhere.

There can be no doubt that Whaley was a troubled man, but so are all abortionists. Operation Rescue collects documents related to the abortion cartel and has discovered through research that abortionists are more troubled than most. Whaley was representative of those in that line of work, in a shocking sort of way.

Whaley graduated from the Medical College of Georgia in 1974, but, like most abortionists, he did not seem to be particularly good at his new profession. Whaley was sued for malpractice over a complicated delivery in 1981 that ended in a brain-damaged baby. (Duval County Circuit Court Case #84-10676.) He turned his practice to primarily providing abortions.

Walker had a 34-year history of aborting babies, traveling around Florida working for such notorious abortionists as James Scott Pendergraft and Gary Dresden, who both own well-known chains of abortion clinics in a state with more than its share of abortion businesses.

Court records show that in 1983, Whaley found trouble with the law when he was arrested for manufacturing cocaine in his basement with the aid of his brother, Jonathan. Money problems followed. In 1984, his first wife, Terri, divorced him and his medical license was suspended indefinitely.

Whaley was released from Federal Prison on April 5, 1988, but any efforts to reform him had failed.

In 1993, his home went into foreclosure and he defaulted on a car loan. He owed nearly $47,000 in unpaid Federal taxes. Creditors lined up to sue him, a trend that continued until his death.

In 1997, Whaley began racking up a series of speeding tickets and other traffic infractions. From 2002 to 2004 Whaley was sued numerous times for bad debt. He resisted efforts by creditors to collect. He faced multiple income tax leins. He was sued for malpractice.

In 2006, the State of Florida filed a paternity suit requesting child support for a little boy apparently fathered out of wedlock by Whaley.

This followed more reckless behavior in the form of more speeding tickets and more bad debts. In 2009, he was evicted from a Jacksonville business office where he and another doctor operated a “weight loss clinic.” He and his partner were sued for over $26,000 in back rent.

It was a symptom of a larger problem.

The Florida Medical Board filed an Administrative Complaint against Whaley in 2009, recommending suspension or revocation of his medical license after he was caught self-administrating controlled substances for which he had no valid prescription. Police had discovered his use of illicit drugs when they served a search warrant on his home seeking evidence in a fraudulent prescription investigation. 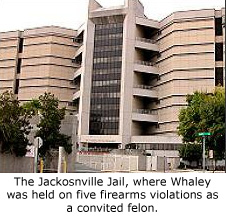 The following year on February 26, 2010, Whaley was arrested and jailed on five counts of firearms violations. The charges indicated that he was in illegal possession of firearms as a convicted felon and was subject to a Domestic Violence Injunction at the time of his arrest. Remarkably, while convicted, he served only one day in jail.

Four months later another of his homes went into foreclosure.

Whaley was a man who was a failure at life. His lack of character manifested in drug problems, financial woes, adultery, domestic violence, malpractice, and law-breaking. Who would hire such a man except for abortion clinics and shady weight loss schemes? Apparently, no one.

Such is the life of most abortionists. They are a troubled lot prone to broken relationships, sexual dysfunction, domestic violence, drug abuse, and other deviant and criminal behavior. Apologists for the “pro-choice” position hold these people up to be heroes, who nobly aid women in their time of need. Nothing could be further from the truth.

If there is any lesson to be learned in the sordid details of Whaley’s life for anyone considering an abortion, it is this: Run. Run as fast and hard and as far away from your local abortion clinic as possible. No matter what Cecile Richards or any of the other abortion apologists may say, you are not safe. The abortion procedure itself may be a relatively simple one, but those who do it are prone to screwing up everything they touch, just like Walker Whaley – or worse.

For the rest of us, we must wonder long and hard why the medical profession allows such troubled men and women to continue practicing. It is a national disgrace and a health care crisis. As pro-life supporters, it is up to us to warn the public of the truth. These people are not the heroes that the likes of Rachel Maddow or Nancy Pelosi want you to believe, but are actually the dregs of society that are little better than back alley quacks. We must air out the dirt on the abortionists and expose them for what they are if we are ever to break through the rhetoric and put an end to this crisis in America.

We must hold the medical boards in our states accountable to do their duty and purge their ranks of these disreputable miscreants. Enforcement is the key.

Many abortionists today can no longer practice because Operation Rescue documented their abuses and reported them. Abortionists cannot stand up to that kind of scrutiny. Their own moral failings are their weakness.

The world is a little safer now that Walker Whaley has shuffled off the mortal coil, but what of the others? They are still out there – with all their vices – victimizing women and profiting from the taking of innocent lives. Meanwhile, they continue to be lionized by politicians and media who have no idea what they are actually protecting, nor do they care. If that seems frightening, it should.