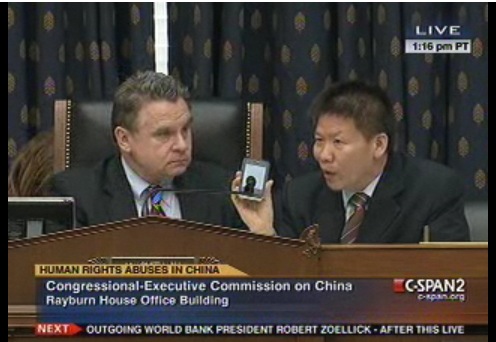 Chen Guangcheng spoke live via telephone today at an emergency Congressional hearing today in the U.S. House about his situation and how he desires to meet with Secretary of State Hillary Clinton.

At the end of a hearing today, in which several top activists fighting for human rights and freedom for Chen and his supporters pressing the case against forced abortions, Bob Fu, the president of ChinaAid, got Chen on the phone for the members of Congress in attendance to hear.

After the witnesses had all testified, Rep. Frank Wolf (R-VA) asked if anyone had been in touch with Chen since Wednesday. A short time later, Fu and CECC chairman Chris Smith (R-NJ) telephoned Chen and were able to have him speak directly to the hearing.

Chen, from a room at the hospital where he is getting medical care, told members of the panel that he wanted to meet with Secretary of State Hillary Clinton and that he hoped he could get help from her and meet her face to face to talk about his situation. Chen said he did not realize the extent of the danger he faces until he left the U.S. Embassy.

“I want to meet with Secretary Clinton. I hope I can get more help from her,” he said.

Chen told the panel he is worried about the safety of his family, his brothers and supporters who helped rescue him from home detention. He said immediately after he was discovered missing, his daughter was banned from going to school.

Chen expressed his desire to leave China with his family, but made it clear that he thought of it as only a temporary measure so that he could “rest.” He did not say anything about seeking political asylum.

“I want to come to the US to rest. I have not had a rest in 10 years,” he said. “I’m concerned most right now with the safety of my mother and brothers. I really want to know what’s going on with them.”

Congressman Chris Smith, a New Jersey Republican, told Chen, “You have a panel of people who have testified on your behalf who are all here on behalf of your family, your nephew.”

Smith added, “Word is getting out, and your case is the test of Chinese commitment to protect you — which they were very dubious about those assurances. It is also a test of the United States about whether human rights really matter. You and your family and supporters should be on a plane to the United States.

“Chen we are all praying for you and we will be unceasing in our efforts to secure your freedom,” Smith said. “This phone call absolutely underscores why we’re here.”

“I want to thank all of you for your care and for your love,” Chen responded.

Smith also told Chen that Batman actor Christian Bale conveyed his support and Chen thanked him for trying to see him previously.

During the hearing, the human rights activists pressed for the Obama administration to do more and said Chen Gaungcheng and his family should accompany Secretary of State Hillary Clinton when she returns from China this week.

bers of the panel that Chen must be offered political asylum.

“If the U.S. government and President Obama have the will and determination to help do that,” Hu said, “I think the Chinese government will let them go.”

He questioned whether “the Chinese and U.S. governments have struck a shameful deal.” Citing the well-known fact that Chen and his family members have been the target of repeated and consistent abuse by Chinese officials, Fu pointed out the unlikelihood that, as U.S. officials have claimed, “Chen Guangcheng left the embassy of his own volition.”

Other witnesses also raised questions about how the U.S. side had handled the negotiations resulting in the handing over of Chen into the hands of the Chinese. Several asked the commission to bring the officials to testify about their actions and decisions at a future hearing.

The witnesses also spoke eloquently and movingly about the black mark that this incident has left on the reputation of the United States, with one panelist reading a selection of Chinese Internet posts decrying the U.S. move.

Reggie Littlejohn of Women’s Rights Without Frontiers told the panel that, if not handled correctly, the Chen situation will do “tremendous damage to the United States’ reputation as a human rights defender.” Littlejohn said the Obama Administration

During the meeting, members of Congress were told that Obama officials didn’t see Chen in the hospital the first night because a staffer told them visiting hours were over. Smith says visiting hours are now permanently over because US Embassy officials now are not allowed to see him.

The C-Span website has the entire hearing online at: https://www.c-span.org/Events/Congressional-Executive-Commission-Examines-Chen-Guangcheng-Case/10737430405-1/