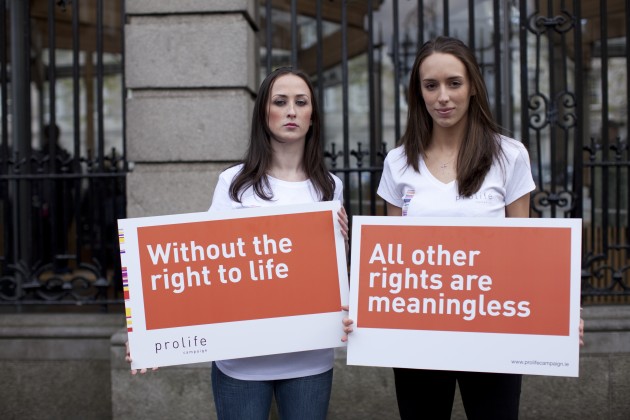 THE PRIVATE MEMBERS’ Bill on abortion sponsored by Socialist Party TD Clare Daly, voted down in the Dáil last week would have given effect to an abortion on demand regime in Ireland, if passed into law.

The deceptively titled, Medical Treatment (Termination of Pregnancy in the case of Risk to Life of Pregnant Woman) Bill 2012, created the impression that women in Ireland are currently being denied necessary medical treatments in pregnancy because of the absence of abortion here. This is not true.

If provision of medical treatment was all the Bill was intended to do then it is superfluous. Women in Ireland receive outstanding care when pregnant and Ireland, without abortion, according to the latest UN statistics on women’s healthcare, is one of the safest countries in the world for pregnant women, safer than places like England where abortion exists throughout the entire nine months of pregnancy.

The fact that women don’t suffer because of the absence of abortion in Ireland has been acknowledged by medical professionals here time and time again.

The sponsors of the Bill have also chosen to ignore all the peer-reviewed evidence in the twenty years since the X Case decision (on which this Bill is based) highlighting the adverse effects of abortion for women.

The Supreme Court decision of 1992

Much has been written about that ruling over the past two decades. However the scantiness of the evidence on which the Supreme Court based its sweeping decision is usually overlooked.

The court ruled that Article 40.3.3 envisaged legal abortion where there was “a real and substantial risk to the life of the mother”- including the threat of suicide.

However the court heard no medical evidence on the question of whether abortion protected women from suicide.

In fact, we now have a number of very rigorous studies showing that women who have had abortions run a greater risk of serious mental health problems. For example, the widely publicised peer-reviewed study from Finland, by Mika Gissler et al, found that women who had abortions were six times more likely to commit suicide compared with those who continued on with their pregnancies.

We’re also learning that so-called regulated abortion isn’t as tightly controlled as we’ve been led to believe. Just recently media reports in Britain exposed some of the less savoury practices of the abortion industry. In January, Dr Phanuel Dartey, a doctor working for Marie Stopes was struck off the medical register in England for almost killing an Irish woman during a botched abortion.

Marie Stopes claimed this was an isolated incident, but in 2001, Dartey had been involved in a case in which a woman had actually died during an abortion procedure, an uncomfortable fact which undermines Marie Stopes’ claims.

There is nothing enlightened or progressive about abortion legislation. As well as giving absolutely no protection to the right to life of the unborn child, up to birth, it does a colossal disservice to women as the recent stories about abortion clinics in Britain and other countries increasingly highlight.

In 1997, another high profile court case, the C case, concerned a young girl who became pregnant as a result of rape. The High Court ruled that the “compassionate” solution was to allow the then Eastern Health Board, under whose care the girl had been, to bring her to Britain for an abortion. But in an interview in 2009 the woman at the centre of the case stated that she deeply regretted the abortion.

The National Women’s Council of Ireland

Another noticeable feature regarding the publicity surrounding the abortion Bill currently being debated was the briefing session organised by the National Women’s Council of Ireland (NWCI) in the Dáil on Tuesday. The NWCI chose to only invite women to speak who have had abortions and are now campaigning for legal abortion. Shamefully, they chose to exclude the voices of women who have been hurt by abortion.

Not only that but last year the NWCI publicly attacked an organisation called Women Hurt, a group which represents women who regret their abortions – for merely existing. Why should the voice of these women not be heard? Given that the NWCI is state-funded, the fact that this briefing was hosted by them raises the question as to whether the NWCI represents all women, or only those who agree with it on issues such as abortion?

There is no mandate to legislate for abortion here given the 1983 referendum and public opinion since then. The Irish people have consistently shown in opinion polls carried out by reputable polling companies like Millward Browne and Red C that (when the difference between medical treatment that indirectly results in the loss of life of the unborn child and direct abortion is explained) that a majority are in favour of protection of life.

Ultimately, the Bill before the Dáil has nothing to do with ensuring that women receive proper medical care when pregnant. Rather it is purely and simply about introducing an abortion on demand regime into Ireland. Women and their babies deserve better.

LifeNews Note: Dr Ruth Cullen PhD is a clinical psychologist and a spokesperson for the Pro Life Campaign.