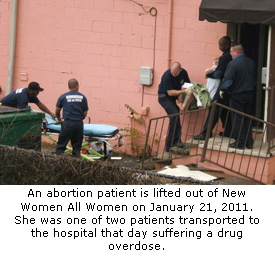 An incident that sent two abortion patients to the hospital from a Birmingham abortion clinic in January has resulted in a scathing 76-page deficiency report issued last week by the Alabama Department of Public Health that details dangerous and deceptive practices that continue to endanger the health and safety of women.

The report found violations in nine categories after a complaint lodged by a pro-life activist prompted a health inspection of New Woman All Women clinic owned and operated by Diane Derzis, who was once dubbed by Alabama legislators as the “Abortion Queen.” Derzis owns abortion clinics in Alabama, Georgia, Mississippi, and Tennessee.

The massive report is one in a long series of deficiency reports issued to NWAW dating back to 2003.

“This clinic is a repeat offender that continues to violate without respect for the law or the health and safety of their patients. We are asking the State of Alabama to close this dangerously shoddy abortion mill before someone dies,” said Troy Newman, President of Operation Rescue and Pro-Life Nation.

On January 21, 2012, two abortion patients were transported to UAB Hospital after suffering overdoses of the drug Vasopressin. The women were carried by hand out of the clinic to awaiting gurneys by emergency responders who had to negotiate a trash-strewn back alley to reach a rear entrance with several steps and a broken safety rail. Pro-life activists photographed the incident and obtained copies of two 911 calls placed by Derzis that understated the condition of the women.

Pro-life activists filed a complaint with the Department of Public Health, which prompted the investigation. A second complaint was also filed with the Alabama Board of Medical Examiners against abortionist Bruce Elliot Norman, who conducted the abortions at Derzis’ clinic that day. The ABME investigation is still underway

The Department of Public Health conducted an investigation from February 2 to March 1, 2012, that included a facility inspection and interviews with Derzis and several of her clinic employees. The DPH noted that NWAW was cited for violations in the following categories:

* Clinic staff was not properly trained to provide safe quality patient care.
* Failure to have policy and procedures related to medication errors and the administration of medications. This resulted in the hospitalization of three abortion patients on January 21, 2012, with one patient placed in ICU.
* There was no documentation that the two abortionists employed by Derzis were even qualified to do abortions.
* Abortionists made illegible notations on patient charts that made determining critical information about patient care impossible. In several cases, the abortionist’s notes about patient care and/or condition were completely false.
* Lack of documentation of medications administered.
* Inaccurate preparation and administration drugs resulting in overdoses or inadequate pain management.
* Use of equipment with inspection dates from 2007 or no inspection date at all.
* Failure of on-call nurse to return patient calls, document correct dates on reports, or notify the physician of patient problems.

The clinic’s lack of training or orientation policies led to abortion complications. It was because of this lack of training that the RN on duty on January 21, 2012, drew up and administered 2 cc’s of Vasopressin instead of the ordered 0.2 cc’s, or ten times the recommended dosage, sending a total of three patients to the hospital.

The clinic owner, Diane Derzis, was confronted specifically about the regular practice of a non-licensed employee administering medications. She responded, “She’s been doing it for years.”

The report indicated that notations made on the patient charts were illegible, nonsensical, or just blatantly false. In many instances, the state survey team found charts signed off by a nurse who was not even in the clinic that day and incredibly inconsistent time logs. For example, one record showed the patient’s procedure time nearly an hour after her documented discharge.

The abortionist, Bruce Elliot Norman, indicated on two charts that the women were “Ambulatory, d/ced [discharged] with no distress”, meaning they walked out of the clinic in good condition. However, those patients were the same ones who were transported to a local hospital in January after having suffered a drug overdose administrated by an inadequately trained nurse. Photos show the women being carried out of the clinic by paramedics.

Norman made notes on some records that he performed ultrasounds on abortion patients the same day as their abortions, prior to their surgeries as state law mandates. However, the survey team discovered several ultrasound photos dated days after a patient had an abortion.

The survey team also found that records which had been forwarded to them before the investigation had been altered when they arrived on-site.

“The most recent deficiency report reveals more than just shoddy abortion practices. It reveals that Derzis and her abortionists attempted to deceive on several occasions to avoid having to comply with the law. People like that present a very clear and present danger to the public,” said Newman.

The clinic was found have failed repeatedly to properly monitor women during surgeries and in recovery.

One patient reported for an abortion at 16 weeks 2 days gestation with higher than normal blood pressure, a history to two cesarean section delivers, surgery for the removal of her right ovary, and a weight of 230 pounds, all risk factors for potential complications. The abortionist took an hour to do the Dilation and Extraction (dismemberment) abortion. At one point he stopped and ordered Pitocin, a drug that increases the intensity of uterine contractions, for the patient because he was having difficulty with the procedure. The patient was not monitored while the Pitocin was given, in violation of patient standards of care. The abortion was later completed.

Patient records revealed that allergies to latex and the antibiotic Doxycycline clearly noted on patient charts were simply ignored by the abortionist and clinic workers. One patient allergic to Doxycycline was sent home with a prescription of drug.

Infections and a lack of reporting

Again and again over the past nine years, NWAW has been cited for a lack of infection control protocols. As a result, women have experienced complications including fever, abdominal pain, and other problems.

In 2010, NWAW reported that no infections were experienced by patients that year. However, inspectors discovered several records noting cases of infection after abortions that year.

Other inspection reports detailed a employees who did not wash their hands or properly clean equipment between patients.

In addition to the filing of false information with the state regarding infections and ultrasounds, NWAW was cited in 2006 for failing to file the required termination of pregnancy reports in nearly 30% of cases.

Some of the violations are problems repeatedly noted in health deficiency reports by since 2003. The five previous reports indicate a pattern of untrained workers performing medical duties for which they are not qualified, poor or deceptive record keeping, expired medications and ill-maintained or non-functional equipment.

One report from 2006 indicated that women that were to be medicated 20-30 minutes prior to surgery were in fact being medicated more than two hours prior to their abortions, which took place after the medication had essentially worn off. However, that same year, the clinic administrator was caught improperly buying and administering narcotics to herself. She was a Licensed Practical Nurse whose nursing license had been previously revoked for drug addiction.

“It seems that while the patients were forced to endure surgical abortions without adequate pain relief, the clinic administrator was enjoying all the drugs she could get,” said Newman.

Other offenses over the years included broken or poorly maintained emergency equipment, performing surgery without a working defibrillator, and the use of expired medications – some as old as seven years out of date.

“All of the deficiency reports taken together paint a picture of a dangerous abortion clinic that only cleans up when people are watching. But once the health inspectors are gone, the abortion abuses resume. Medications are allowed to expire. Equipment isn’t maintained. Employees stop washing their hands or cleaning up between patients. Drugs are abused or improperly administered. Laws meant to protect patients are ignored and record keeping is sloppy or down-right false,” said Newman. “Cutting corners on patient health and safety is standard operating procedure for these people.”

Today, New Woman All Women remains open. A plan to correct the deficiencies has not been finalized. In the meantime, women continue to patronize the abortion business unaware that the clinic does not meet minimum safety or patient care standards and routinely ignores patient health and safety as well as the law.

The Alabama Department of Public Health has the authority to close this clinic in order to protect the public. Several pro-life organizations, including CEC for Life, Pro-Life Nation, Operation Rescue, and others are calling for the ADPH to close this chronically troubled abortion clinic.

“We need to bring pressure to bear of the ADPH so that they will act promptly to protect women from the abortion abuses inflicted on women at New Women All Women. We urge the public to contact the ADPH and demand that they close this clinic immediately,” said Newman.