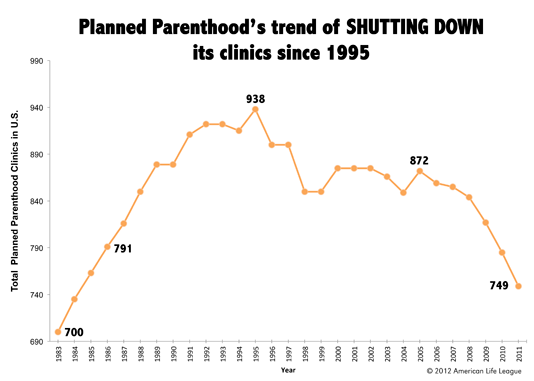 The number of clinics run by the Planned Parenthood abortion business has declined again, according to a new survey conducted by a watchdog group. The decline continues a six year trend showing a continuing decline in Planned Parenthood facilities and affiliates.

“Planned Parenthood, for its part, has said that it has had two of the most difficult years in its history. Pro-life activism has increased dramatically; the abortion giant has faced one battle after another from pro-life forces. The graph below details Planned Parenthood’s trend of shutting down its facilities since 1995,” Diller says.

Planned Parenthood Federation of America (PPFA) is headquartered in New York City and the federation is made up of separately incorporated affiliates across the country. Each affiliate must adhere to the standards of affiliation mandated by the national office, participate in nationwide insurance and volume purchasing agreements, and pay approximately one percent of its gross income in dues to the national office. Each affiliate operates Planned Parenthood facilities within a defined geographical area.

Diller says, “Today we see many of those affiliates shutting down and merging with others in order to reduce the cost of operations and ensure adherence to its radical population elimination agenda.”

The number of Planned Parenthood affiliates peaked in 1987 at 181. By the end of 2011, that number had declined to 82 as many affiliates have merged in order to cut administration costs and overhead in a declining economy. 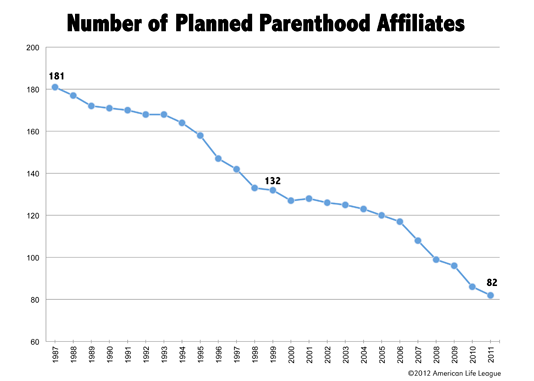 Although the number of overall centers and affiliates has declined, STOPP shows Planned Parenthood has been pushing to increase its number of facilities selling the dangerous RU 486 abortion drug (mifepristone). Those centers increased from 57 in 2005 to peak at 156 in 2010. By the end of 2011, that number had declined to 152. Forty-two percent of Planned Parenthood facilities sell the abortion drug while 23 percent do surgical abortion.

As the following graph shows, while Planned Parenthood is cutting centers, the percentage and number of centers doing surgical or drug-based abortions continues to rise. 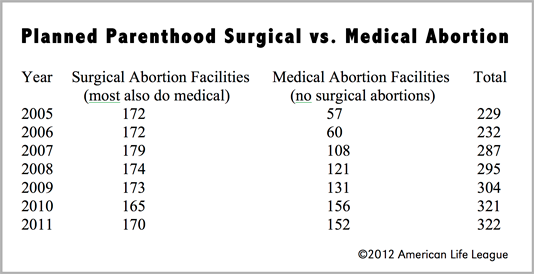 Diller says the big battle for the prolife movement is to combat Planned Parenthood’s government funding at every level.

Diller continued, “Finding itself in dire straits, Planned Parenthood has focused its energy into pushing Obamacare, so that it can not only stay afloat, but also increase its deadly influence and presence in our communities. It currently receives $1.3 million per day in government funding, and that stands to grow exponentially under the Obamacare, socialized medicine scenario. In the 2009-2010 fiscal year, the abortion giant received 46 percent of its income from government sources.”