“If the evidence presented in Neuhaus’ case had been presented during Tiller’s criminal trial, there is no doubt that he would have been convicted of illegal late-term abortions,” said Troy Newman, president of Operation Rescue and Pro-Life Nation. “This shows that Tiller was doing illegal abortions based on phony mental health excuses for at least seven years.”

The revocation order is expected to be finalized by the full Board in April and is the result of a complaint filed in 2006 by this author.

Neuhaus provided the second referral that Tiller needed in order to legally justify the expensive post-viability abortions that was his specialty — and his bread and butter. Each referral issued by Neuhaus was based on a mental health diagnosis that she claimed justified the late-term abortions. She certified that each woman met the narrow legal exception to the Kansas law banning post-viability abortions, which allowed such abortions to be done only if there was the risk that the woman would suffer a “substantial and irreversible impairment of a major bodily function” if the pregnancy continued.

However, the records show that Neuhaus was incompetent. She failed to conduct proper mental health evaluations on eleven patients that she referred to Tiller for post-viability abortions. Her diagnoses were a sham.

In fact, Administrative Judge Edward J. Gaschler indicated that there is no evidence that Neuhaus ever personally evaluated the women beyond having them answer yes or no questions that were plugged into a computer program called PsychManager Lite, which automatically generated a diagnosis. For Patient #8, there was no evidence that Neuhaus ever saw her at all. The only information about the individual circumstances of each woman in Neuhaus’ patient records came not from her own observations, but from intake forms generated by unlicensed workers at Tiller’s clinic.

“Based upon the evidence, the Licensee [Neuhaus] simply completed yes/no questions and answers and whatever diagnosis the computer gave, she assigned that diagnosis. This method of practicing medicine does not meet the applicable standard of care,” wrote Judge Gaschler.

He concluded, “The care and treatment of the 11 patients in question was seriously jeopardized by the Licensee’s care.” 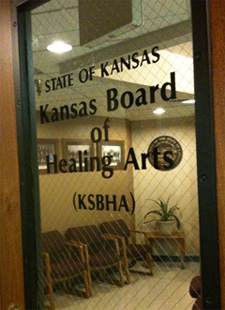 In addition to the computer generated diagnoses, the dates on some Neuhaus’ computer-generated reports were indicators that late-term abortions were being done illegally.

For example, Neuhaus’s reports for Patients #2, #6, #9, #10, and #11 were all generated and time-stamped after the dates that these women’s abortions already began. Tiller’s records showed that Patient #10 had her initial appointment on October 4, 2003, yet Neuhaus’ diagnosis report is dated November 13, 2003, nearly six weeks after the abortion would have taken place.

For one file, that of Patient #5, the computer diagnosis reports were generated on August 7, 2003, but that date was crossed out and changed on the forms to August 12 and 13, 2003. The date that Tiller’s office indicated that Neuhaus had an appointment with Patient #5 was August 12, 2003. No explanation for the discrepancies was ever given.

“It appears that diagnoses were being generated after the abortions had already begun, which would have constituted a violation of the law,” said Newman. “One was generated ahead of time before Neuhaus had any opportunity to interview the patient. This only confirms the long-held belief that Neuhaus was rubber-stamping late-term abortions for Tiller without any sound medical basis so he could collect on the huge fees he charged for such abortions, which ranged in price from $5,000 to in excess of $18,000 depending on the circumstances.”

No basis for mental health diagnoses

In all patients, Neuhaus failed to perform mental health evaluations, review the patient’s medical and social history, or make any kind of proper examination. She made no notations that indicated she ever spoke to the patients beyond the yes/no questions asked by her PsychManager Lite program, which was essentially meant to be a teaching tool for students of psychiatry. The program contained cautionary statements that the program should only be used in conjunction with proper mental health evaluations by skilled professionals. Facts in the Neuhaus case showed she was neither skilled nor did she conduct proper evaluations.

Dsscussion at Neuhaus’ disciplinary hearing showed that one problem with the computer generated diagnoses was that some of the questions were compound, which gave no indication to the patient’s true condition or state of mind. An example of this was one question that asked if the patient had experienced any weight gain or loss. If the answer was “yes” there was no way to know if the weight was gained or lost. Weight gain in normal and healthy in pregnancy, yet the computer would count that as an indicator of possible mental health issues.

“These diagnoses amounted to quackery,” said Newman. “The computer program could make normal and healthy conditions of late-term pregnancy such as weight gain, trouble sleeping, and lack of interest in participating in aggressive sporting activities, appear to be symptoms of mental illness. This was all to give the appearance that the abortions were medically justified, when in fact they were not.”

When Neuhaus’ computer programs conflicted in their conclusions, or when her conclusions differed from that on Tiller’s intake forms, she never attempted to determine which conclusion was the correct one. She simply ignored them.

Neuhaus’ computer reports indicated that some patients were suicidal, yet there was not one bit of information in the reports on which to base such a diagnosis. Neuhaus never referred these women for counseling of any kind. The only referral they received was for a late-term abortion.

“If the Licensee sincerely believed that the patients were seriously mentally ill, it would seem likely that a treating physician would recommend treatment for these rather serious mental illnesses. Yet, the Licensee ignored these alleged mental illnesses,” stated Judge Gaschler.

Patient #10 was an 18-year old woman who was approximately 25 weeks pregnant. According to Tiller’s records, Neuhaus’ appointment with her was October 4, 2003. However, the computerized forms that indicated her diagnosis of Acute Stress Disorder, Severe, was not generated until November 13, 2003, nearly six weeks after the abortion took place.

In order to qualify for that particular diagnosis, a patient must have “experienced witnessed, or was confronted with an event or events that involved actual or threatened death or serious injury, or a threat to physical integrity.” Neuhaus recorded no such event that could have been the basis of the diagnosis for Patient #10.

Under questioning at Neuhaus’ disciplinary hearing, Neuhaus testified that the traumatic event in the patient’s life was the unintended pregnancy.

“This would lead to a conclusion that any unintended pregnancy causes the mental health condition of the pregnant woman to be Acute Distress Disorder,” wrote Judge Gaschler. “There is nothing in the patient file to support this. The Licensee did not document this in Patient #10’s file.”

On March 23, 2009, Neuhaus’ employer, George Tiller, faced opening arguments in his criminal trial on 19 counts of violating K.S.A 65-6703, a state law that at that time banned post-viability abortions unless the abortionist “has a documented referral from another physician not legally or financially affiliated with the physician performing or inducing the abortion and both physicians determine that: (1) The abortion is necessary to preserve the life of the pregnant woman; or (2) a continuation of the pregnancy will cause a substantial and irreversible impairment of a major bodily function of the pregnant woman.”

On March 12, 2009, just 11 days before the trial, Asst. Attorney General Barry Disney entered into a stipulation agreement with Tiller’s lawyers that prevented the evidence from reaching the jury that was later presented in Neuhaus’ disciplinary case.

Disney stipulated that the medical necessity of the abortions was not in dispute because Neuhaus had given Tiller “documented referrals” after she determined that continuation of the pregnancy would cause “substantial and irreversible impairment” to the woman.

This effectively took Neuhaus’ incompetence and unsubstantiated, dubious diagnoses off the table, leaving only the matter of whether or not Neuhaus and Tiller enjoyed an improper financial or legal affiliation.

The jury never heard about the diagnoses made days or weeks after the abortions, or about the concerns that Neuhaus never reviewed patient histories or conducted proper mental health evaluations. They never knew about Patient #8, who was never seen by Neuhaus at all, yet was referred by her for an abortion without having made any recorded diagnosis. The term “PsychManager Lite” was never heard by the jury, nor the fact that the diagnoses used to justify otherwise illegal post-viability abortions were completely baseless and without proper documentation. They never heard Neuhaus’ outlandish theory that unintended pregnancies by default make women mentally ill.

In fact, Disney’s only witness for the prosecution was a very hostile and defiant Neuhaus who made sure everyone knew she resented being forced to testify against her friend Tiller.

It is no wonder that the jury found him “not guilty” in less than an hour. They were blocked from hearing the real evidence that crimes had been committed. Had the jury been allowed to hear the real facts in that case, which were heard by an Administrative Judge in the Neuhaus disciplinary hearings, there can be no doubt that guilty verdicts would have been reached, and history would have been altered.

“It is tragic to think that efforts to protect Tiller from legal accountability for his actions may have ultimately led to his demise,” said Newman.

Just moments after the jury read the “not guilty” verdicts in Tiller’s criminal trial, the Kansas State Board of Healing Arts announced that an 11-count petition against Tiller had been filed by them and would proceed despite the criminal verdicts. That petition was based on the same complaint filed by Operation Rescue that led to Neuhaus’ recent disciplinary action.

“If the Board was willing to revoke Neuhaus’ medical license on counts nearly identical to Tiller’s charges, it would also have revoked Tiller’s license as well,” said Newman. “Tiller’s murder just two months after his trial tragically prevented him from being brought to proper justice. His killer was frustrated by the erroneous belief that the system was broken and could not work. In fact, the system was working, despite efforts to subvert it.”

LeRoy Carhart, an abortionist who worked for Tiller, publicly stated that Tiller had announced his retirement to his staff just two weeks before his death. It appeared that Tiller may have been planning to retire his license rather than submit to Board discipline.

There can be no doubt now that the bogus mental health diagnoses that were used to justify late-term abortions on paper were without basis and were concocted by Neuhaus in order to help Tiller circumvent the law. The post-viability abortions that Neuhaus referred to Tiller were done illegally. It has finally been proven through peaceful, legal means.

“Thankfully, Neuhaus’ quackery has been exposed and she will never do another abortion. Her medical license is currently restricted and her revocation order will soon be finalized, bringing to close the final chapter in the Tiller abortion crime spree that spanned four decades and victimized thousands of viable babies whose mothers came to Wichita for late-term abortions from every state,” said Newman. “This is a victory for every pro-life supporter in the country.”