Hundreds of news articles appeared this week claiming, once again, that the best medical evidence shows that abortion is safer than childbirth.  The rash of articles were all tied to a blatant piece of propaganda published in Obstetrics and Gynecologyby Dr. David Grimes, an abortion provider and chief propagandist for “medical proof” of abortion’s safety.

The new study repeats the same discredited practice of simply comparing nationally reported maternal mortality rates with Center for Disease Control (CDC) reported deaths associated with abortion.  Sounds reasonable, until you learn that there is no accurate or formal mechanism for reporting abortion-related deaths. Indeed, the rules regarding completion of death certificates specifically exclude identifying abortion as a cause of death.

In other words, the CDC numbers on abortion-related deaths cannot be meaningfully compared to maternal mortality rates.  CDC methods simply do not rely on a uniform method of collecting data on abortion related deaths.

In short, Grimes used a very incomplete record of abortion-associated deaths and compared it to a complete record of deaths associated with non-aborted pregnancies, and found that the death rate is lower. Therefore, he concludes, abortion is safer than childbirth.

As they say: junk in, junk out. 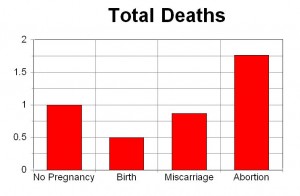 Using this method, the National Research and Development Center for Welfare and Health in Finland reported that 94 percent of deaths associated with abortion (in the first year alone) are being missed in national data reports on abortion.  The same researchers found that women are four times more likely to die in the year following abortion than women who give birth.  Similar findings were reported in a record-based study of California women.

(The figure at the right shows the age-adjusted relative risk of death in the year following a birth, miscarriage or abortion compared to the rate of death among women not pregnant.  The results are from a multi-year study of all women in Finland, linking death certificates to central registries for pregnancy outcomes. It clearly shows abortion is associated with an elevated risk of death, while carrying to term is associated with a lowered risk of death.)

The fact that Grimes, his co-author, the peer reviewers and the editors didn’t even acknowledge the existence of these record-based studies or reviews, published in the last 12 years, demonstrates that they are not seeking to advance knowledge or even to refute these other studies.

Instead, they were publishing a mere propaganda piece, one that can succeed only if they and the public ignore two things: first, all the record-based studies finding the opposite results; and second,  the CDC’s own warning that its abortion mortality data is not complete, comparable to, or even “conceptually” reconcilable with maternal mortality data.

The most damning evidence of the authors’ biases is that their “review” of the evidence totally ignores numerous record-based studies using data from both the United States and Finland — studies that clearly show that abortion is associated with significantly higher mortality than both childbirth and not being pregnant.

For a complete review of the literature on mortality rates related to abortion and childbirth, readers should study “Deaths Associated With Abortion Compared to Childbirth: A Review of New and Old Data and the Medical and Legal Implications.”