Since I’m working on pulling together a prolife message this weekend, filling in for Bob and Pam Tebow who will be in New England instead of at our church, I thought I would say something about Timmy’s entrance into this world.

I’m pulling from a few different sources, including an interview from Pam and also Tim’s comments in his book, Through My Eyes.

Bob and Pam prayed for a healthy baby, but left that up to God.

After Timmy was born, the doctor who delivered him said only a small part of the placenta was attached, but it was “just enough to keep your baby nourished all these months.”

After birth, both Pam and Tim faced serious challenges. Pam said, “We were concerned at first because he was so malnourished.”

Looking at this photo of Tim warming up (right) before last week’s game with the Steelers, I’m thinking malnutrition wasn’t a long term problem. 🙂

Okay, so I’ve told the inspiring story about doctors being wrong—wrong about Pam dying if she didn’t get the abortion, and wrong about Timmy’s long-term health. (By the way, as much as I respect the medical profession, physicians are sometimes wrong in their medical predictions, and even when right they’re not always the best moral guides. That’s why I cringe when I hear people say “abortion should be a decision between a woman and her doctor.” I’ve talked with many women who didn’t have Bob and Pam Tebow’s resolve, but who now wish they hadn’t listened to their doctor when he advised an abortion.)

Returning to the doctors who recommended Pam to abort, suppose they had been right about Timmy having health problems if he survived. Suppose that instead of looking like he does, Timmy had ended up like this boy: 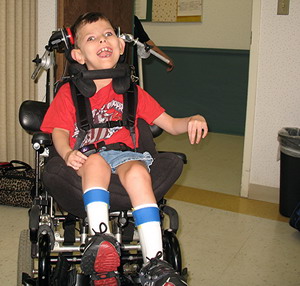 Who makes disabled people the way they are? Some people think it’s the devil, many think it’s just a tragic accident. What does the Bible say?

The LORD said to him [Moses], “Who gave man his mouth? Who makes him deaf or mute? Who gives him sight or makes him blind? Is it not I, the LORD?” (Exodus 4:11)

So let’s celebrate that God preserved Pam Tebow and her son Timmy. But let’s also remember there are countless disabled children and families who need our love and support. (Joni and Friends is one of the wonderful organizations EPM supports that serves them.) And that even if the doctor had been right about Timmy’s prognosis, killing him by abortion would have been just as wrong, and just as tragic.

Finally, if you want a refreshing view of the heart and priorities of a professional athlete, check out this video link sent to me by our friend Diane Meyer. Tim Tebow talks here for seven minutes, mostly about prison ministry. Whether Tim Tebow and the Broncos win or lose against the Patriots Saturday is insignificant compared to the values reflected in this video.

LifeNews Note: Randy Alcorn is an author and the founder of Eternal Perspective Ministries (EPM), a nonprofit ministry dedicated to teaching principles of God’s Word and assisting the church in ministering to the unreached, unfed, unborn, uneducated, unreconciled, and unsupported people around the world. He has written numerous books and articles on pro-life issues.