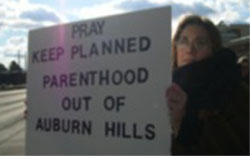 The restriction was put in place by the owners of the Comfort Inn Hotel located behind the building Planned Parenthood purchased several years ago. In October 2010, attorneys for the abortion business tried to get the owners of the Comfort Inn to agree the building could be used as a “medical office” without mentioning that abortions would be done at the facility. Comfort Inn’s owners balked and Planned Parenthood sued in court.

On Tuesday, Oakland County Judge James Alexander ruled in favor of Planned Parenthood of Mid and South Michigan’s interpretation of the deed restriction — essentially giving the abortion business the green light to open in Auburn Hills.

The court’s ruling comes after a 14 month-long battle that pitted the abortion giant against Citizens for a Pro-life Society and other pro-life groups who worked to keep the Planned Parenthood building at 1625 N. Opdyke Road abortion free. Citizens for a Pro-Life Society spearheaded opposition to the opening of the clinic and, for more than a year, the Planned Parenthood property has stood empty and silent while parties on both sides of this dispute battled the case in court.

Monica Migliorino Miller, director of Citizens for a Pro-Life Society, told LifeNews today: “We are filled with great sorrow and disappointment today. Judge Alexander’s ruling will lead to the killing of innocent human life when Planned Parenthood opens the doors of this clinic.”

“We worked hard to stop the spread of abortion’s injustice and hoped to spare Auburn Hills this place of death, lies and sorrow,” she said. “We are sorry that the hotels in the direct vicinity of the Planned Parenthood building may have to share their business environment with the sordid practice of abortion. I know that the Comfort Inn hotel will appeal this case. And we remain undaunted. We will continue to fight the opening of this death center—and be a voice for those innocent unborn who cannot speak for themselves.”

In December, the state of Michigan withdrew a $200,000 taxpayer-funded grant to Planned Parenthood Mid and South Michigan. The Michigan Department of Community Health dropped the grant, according to Ed Rivet, Legislative Director for Right to Life of Michigan. The grant was supposed to go towards helping Planned Parenthood furbish its 17,050 sq. ft. abortion facility.

Lamerand told the Oakland Press, “We don’t know if we are even going to perform abortions there.”

That’s at odds with her own previous comments.

“Carey, who took the hotel’s case for free, says the owners hoped they could persuade Planned Parenthood to operate a nonsurgical facility. He has reached out for financial support from those against abortion to wage the court fight,” it said. “But Lamerand is holding firm to a plan to create what the organization delicately calls “a full-service clinic” that would provide reproductive and contraceptive services, including abortion.”