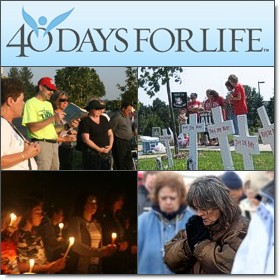 Would you say yes to doing something if you knew it would save a life?

Nearly two years ago to the day, at a Mass marking the anniversary of the Supreme Court decision of Roe v Wade, I was asked to run a 40 Days for Life campaign for the fall of 2010. I was 17 years old, actively pro-life and had recently moved to San Diego to attend John Paul the Great Catholic University. I was introduced to a gentleman named Gene minutes prior, and right away I was asked if I would head up a 40 Days for Life campaign that would consist of a 40 day long prayerful presence outside of the busiest abortion clinic in all of San Diego. I prayed about it and told Gene, “yes” thinking that it couldn’t be too hard, but more importantly knowing I needed to do something.

Fast forward about 6 months. I had to leave school in San Diego and move back home. It was one of those unexpected experiences where I had to trust that it was part of God’s plan for me. Well, within a couple weeks of returning home I received a call from Gene, it was time to sign up for the fall 40 Days for Life campaign. I then lived over two hours away from the location, but I knew that it needed to be done. Lives were being lost by the dozens in that abortion clinic every week. I knew because I would spend every Saturday morning praying outside of that abortion clinic off of Miramar Road. I wept as one after another, women walked in to allow the lives of their innocent babies to be ended.

To make this long story very short, I ran a 40 Days for Life campaign from 2+ hours away using my cell phone and a laptop computer. I prayed, called, emailed, prayed some more, and kept moving forward. I drove back and forth to San Diego for the cast the vision meetings, kick off event, midway rally, and a closing celebration. While it was difficult at times and extremely exhausting as I sat in front of my computer and on the phone throughout the campaign coordinating for the constant presence of as least two people outside of the abortion clinic praying, my life was blessed.

Not only were 10 lives saved during those 40 days but hundreds of people of different religious backgrounds in the community came together with a common goal — to pray for an end to abortion. Hundreds of men, women, and children prayed in front of an abortion clinic for the very first time, and many of those people now pray in front of the abortion clinic and sidewalk counsel regularly.

10 lives were saved, 10 families will not morn the loss of an innocent child, hundreds of people like you and me will continue to pray for an end to abortion, and a community stands together in faith.

To see this happen in a community and be apart of it was an honor and a blessing. When it wasn’t easy or I was exhausted I would pray and let the Lord guide the campaign because it was his work and I was just His instrument. The people who gave their time in prayer and assisted and supported me in making the campaign happen are heroes for the unborn. They said yes to God’s call to protect the most innocent and helpless in our society — the unborn.

I share my experience with you because I want you to know that there was nothing special about me running that campaign, all I did was say yes and prayerfully allow the Lord to guide me. This being said, I ask you to please consider running a 40 Days for Life campaign during lent from February 22 – April 1. You cannot do it alone but with God anything is possible!

Last week I moved back to San Diego and am going to school again. Tomorrow January 10th is the deadline to sign up for a 40 Days for Life Campaign. I may not be able to run this campaign while working and attending school, but I am going to make sure that it happens and find a team to do so. Last night, I spoke with Trippy, the lady who ran the fall 2011 40 Days for Life campaign at my same location, and Trippy said to me “That FPA (Family Planning Associates) is close to closing!” This abortion clinic went from being the busiest San Diego abortion clinic in the fall of 2010 with women and teens coming all the way from Mexico to today being closed on random days with business significantly reduced. This is because of the power of prayer and a community that is giving their time to pray and sidewalk counsel for each baby’s life that is at risk of being lost. I plan to amp things up even more as we go into this spring campaign because we are shutting down that abortion clinic!

Will you say yes to doing something to save a life?

Your age and your background does not matter. If I could do it at 17 from two hours away, ANYONE CAN DO IT! Sign up to run a 40 Days for Life Campaign this spring! Assist those who may already be running a campaign at your chosen location! 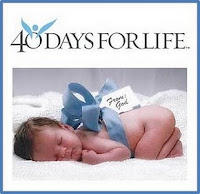 What have 40 Days for Life Campaigns done across the world?

These are just what the numbers we know of!

LifeNews.com Note:  Timmerie Millington is a 19-year-old pro-life activist and blogger who is the former Director of Communications for Survivors of the Abortion Holocaust, and Coordinator of Social Media for Angels in Waiting.