The London Telegraph newspaper features a story on little Taya Kennedy, a 14-month-old girl who has Down’s Syndrome but has taken the modeling world by storm. The camera loves her and she now has her own modeling agency that is booking her gig after photogenic gig.

Kennedy is just another example of the joy such children and people with Down syndrome bring to the world but who, tragically, see their lives snuffed out by abortion at a 90 percent rate.

‘Taya is an incredibly photogenic, warm and smiley child, and that shines through in her photographs,’ says Alysia Lewis, owner of Urban Angels, the prestigious UK model agency that has signed her up.

‘We only open our books twice a year and select just a few new children each season.

‘The standard is high; the desire for places strong. Taya is one of 50 children we chose from 2,000 applicants.

‘That she has Down’s Syndrome did not enter the equation. We chose her because of her vibrancy and sense of fun. Not all children are comfortable in front of a lens and with a photographer looking at them — especially when they are so young. But Taya was so relaxed and happy. She was just what we were looking for.’

Gemma Andre, Taya’s mother, says she is offended when people come up to her and tell her they’re sorry her daughter has Down syndrome.

‘I always believed my daughter was stunning but I thought, “I’m her mum. I’m biased,”’ she says. 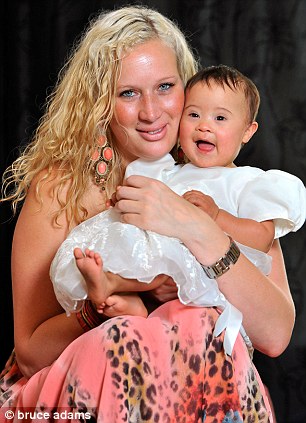 ‘When people say “poor you” I find it offensive and irritating,’ said Taya’s mother Gemma

‘When the agency rang me and said, “We want her on our books. She’s absolutely beautiful”, I was delighted.

‘I asked them if they were aware she had Down’s Syndrome. They said: “It’s immaterial. We’ve accepted her.” At that moment I burst into tears. I was overjoyed, not so much because Taya was going to be a model. More importantly, she had competed on equal terms with every other child and succeeded.

‘People can be really negative about children with Down’s. They say they can’t do this and won’t be able to achieve that. It’s incredibly frustrating. Someone said to me the other day: “I suppose she’ll never be able to live an independent life,” and I said, “Why on earth not?”

‘When people say “poor you” I find it offensive and irritating. The way I see it, some people cannot even have children and God has given me this special child.’

That’s the attitude more people need to have about special needs children — all of whom were born under a threat much bigger to their lives than any medical condition or chromosomal disorder they may face: abortion.

Gemma says her daughter will go on to experience a happy, productive life — something 99 percent of people with Down syndrome say they have.

Researchers at Children’s Hospital in Boston surveyed families where a member had Down Syndrome and found that Down Syndrome is a positive.

Read the rest of this touching story here.