Early Options TM located in New York City says they are not a clinic, and the aspiration method they sell for early abortion is not invasive and is not a surgery. They also assure the women that they really want to help them, and that at five weeks the heartbeat is not really a heartbeat. Imagine if you are a young woman who is pregnant and scared? Does this sell? How is such dishonesty even legal? Never mind, it’s abortion.

Early Options TM located in New York City offers a “natural abortion” for women who are pregnant and want to terminate it. They recommend their trademark “aspiration abortion procedure” as the “most natural abortion method.” What is this novel and amazing method? It’s a syringe device. What makes it different? Nothing. The same cannula is inserted through the cervix and the embryo is suctioned out of the uterus. It’s just as invasive as any other aspiration method. This one just doesn’t use electric suction, it uses manual suction and the embryo is deposited in the tube instead of being sucked into the machine vat. Disposal is a matter of disposing of the syringe. It’s “natural” because when the suction is applied, the embryo “naturally” detaches from the uterine wall. “Naturally.” And there’s no disturbing suction noise.

Lie #2: We’re not a clinic!
Early Options TM promises they are not like all those other clinics that move women through as fast as they can (but you’ll recover immediately). No, they are not even a clinic. They are private, complete with a waiting room and exam rooms. They don’t schedule a lot of women at one time and herd them through an “assembly-line” like the other clinics do. They only do abortions and sell the abortion pill. They make one appointment at a time. But they are not a clinic. They are something else. 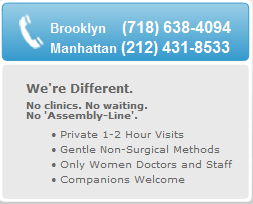 Lie #3: We’ll help you!
This woman who had a trip planned was so grateful. “I was so early in the pregnancy that the ultrasound didn’t show anything. I asked for the abortion pill, but the doctor said it was better to do an Aspiration procedure in my case since they couldn’t see the pregnancy in the ultrasound. She said it’s best not to mess with hormone levels when there’s any chance the pregnancy could be outside the womb. She suspected the pregnancy was normal, just very early, but better to be safe in case it was ectopic.” They accommodated her immediately. “I came in later that day for the procedure and they drew blood to test my hormone levels. I was probably in the office for a total of 2 1/2 hours, but the actual Aspiration procedure took only ten minutes. Yes, it hurt very much, but supposedly it hurts more when the woman is earlier than 6 weeks along because there is less tissue. I was probably 2 1/2 – 3 1/2 weeks along.” She left for her trip out of the country later that week. 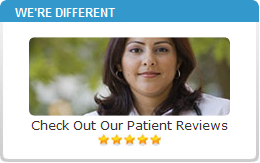 Lie #4: IMMEDIATE RECOVERY!
Early Options TM offers after your natural and quick abortion (for $740) in the not-a-clinic, to serve you a beverage and a “snack of your choice.” You will lay on the table for a few minutes while the “cramps ease quickly” and “in a few more minutes you will feel completely normal.” Then “you get dressed and resume your normal daily activities.” Even though they provide pain killers and local anesthesia, they repeatedly assure the customer that, “You do not need to recover from the procedure.” They even assure you that you will bleed minimally. No worries. One reviewer who gave the place one star described a very different experience. In their FAQ’s page they address why a woman may bleed for up to a month. “Don’t worry, retained tissue does not cause any harm to you or your uterus. However, it is possible that you will need a repeat procedure.”

Lie #5: No heartbeat!
This board certified physician who trademarked the novel and natural procedure, also wants women to be given accurate medical information. Here’s the information given about early pregnancy: “If there is no embryo, why do they say there is a heartbeat? At seven weeks of pregnancy, the cells that will become the embryo start to cluster inside the gestational sac. These cells can be seen on ultrasound, but would not be visible to the naked eye. At this time, the cells that are determined to later form the heart start to “beat.” An ultrasound technician will often interpret the beating cells as a ‘heartbeat’ long before a heart develops.” Silly ultrasound technicians! Don’t they know, the “cells” beat, not the heart that the cells form. Now watch this 30 second video: Heart beating at 3 weeks and 1 day after fertilization.

“The Aspiration Method is the safest way to end early pregnancy. It can be completed in less than 5 minutes in a private examination room. Return to your normal activites immediately. Safer then surgery: No scraping, No machine, No need to be put to sleep.”

Any comments? I’m biting my tongue and lifting my fingers from the keyboard now…