In New York City 41% of pregnancies are reported to be terminated by abortion. I Googled that statistic to verify it and in the sidebar was a string of advertisements. One in particular caught my eye.

Sure enough, that’s what they offer. General anesthesia – the mother is asleep – while the child is killed. 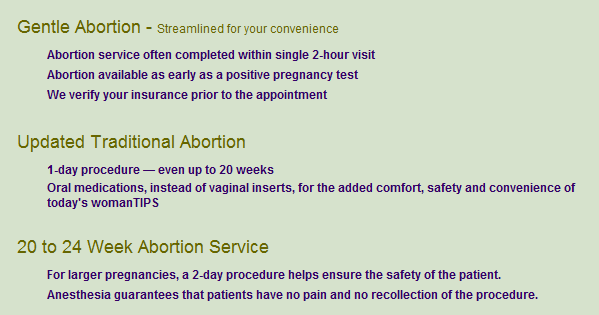 What struck me as odd is that a provider that buys advertising usually promotes the services believed to be of most interest to the potential customer. But post-20 week abortions are reported to be a rare service, usually 1-3% of the total abortions reported in a given year. The fees begin around $360 and increase with the “size of the pregnancy” up to $1,700 typically.

What is reported? In NYC, of the 87,000 abortions reported in 2009, only about 2,000 were reported to be past 21 weeks, falling into that 1-3% consistent with the national reports. In the report, however, it is acknowledged how unreliable these numbers are. “All induced and spontaneous terminations, regardless of gestational age or weight, are required to be reported. However, these numbers depend on the agency resources available to perform outreach to the reporting sites.” You have to find the report in the “Technical Notes” at the end to see that the information requested is also “not open to inspection or subject to subpoena.” An abortion clinic worker fills out the form and submits it, that’s it. Clearly, what is reported is only to be taken as just that – the abortion industry tells us only what they want us to know.

What is advertised? It is quite common for providers to advertise abortion to 24 weeks, along with the offer of general anesthesia, the (unreliably reported) gestational age is solely determined by the provider. This is just a small sampling.

Many of the clinics claim to be “fully accredited” by an organization called “The Joint Commission.” It’s an agency that promises to bring prestige to the office-based surgical facility. To become accredited the provider needs $7,000 for a three year period, a one-day examination of the facility, a set of patient surveys, and an agreement to unscheduled surveys with 7-days notice in advance. The Joint Commission does not makes its standards or its findings freely public, and it is tied to Medicaid. State governments require licensure by this agency to receive Medicaid reimbursement.

What is the truth? In the wake of the Philadelphia Gosnell horror story where unborn children were routinely killed after birth at advanced stages of development, and given the lack of rigor in the abortion statistic reporting, combined with the visibility of the “No pain – No memory” type of advertising for general anesthesia where the mother is asleep and the only people in the room are the people being paid to successfully kill the child, would it be irrational to wonder what really goes on in the allies clinics of New York City – or anywhere else for that matter? No, not at all.

Put this all together.

1) Gosnell was only discovered because police found the bodies of children in his clinic while responding to a drug-related complaint.

2) Gosnell did not report truthfully to the state, and no one questioned what he was doing for 30 years.

3) These clinics advertise a procedure that for $1,700 renders the mother completely unconscious. There are no mentions of anesthesiologists on staff at the clinics.

This is a fact I just realized: Anyone, not just clinics in NYC, could do what Gosnell did with impunity as long as they didn’t store the bodies, and the abortion industry knows this. “Gentle Abortions. No pain. No memory.” We need to wake up and admit what is right in front of our eyes. There is absolutely no reason to believe that the Gosnell incident was an anomaly. There are plenty of reasons to believe otherwise.