A local pro-life advocate in Massachusetts claims police beat him while his hands were handcuffed behind his back after they detained him for passing out pro-life literature at a local fair in Franklin, Massachusetts on the grounds of a Catholic Church.

The conservative web site Mass Resistance published the account of Peter D’Attilio, who was detained, jailed and had his vehicle improperly searched for handing out pro-life fliers. D’Attilio describes what happened:

On Thursday, August 11 at 7 pm I arrived at the St. Rocco fair (an annual Italian festival held on the grounds of St. Mary’s Catholic Church in Franklin, Mass.) and handed out pro-life flyers to over 50 teens. They were well received as they thanked me for the info. At 7:45 I went back to my truck for five minutes to say a few prayers. My truck was parked at the corner of Pleasant St. and Queen St., not too far away.

Then I re-entered the fair which was free and open to the public. I gave out the flyers to about six teens who were sitting at a table when two cops approached me. One of them asked, “What are you doing?” I said, “Giving out public service announcements, sir.” He asked to see my ID. I said “Why?” (Police are required to have probable cause of a crime committed to demand an ID. I’ve seen situations where pro-life people, after giving out their IDs, will be immediately given a legal no-trespass warning without reason, and other such harassments.)

He got upset and demanded my ID and said that by law you have to identify yourself to a police officer, and threatened me with arrest. Besides that, he would not give a reason. Then he falsely accused me of having outstanding warrants as a reason to not ID myself. He said that this was private property owned by the church. So I said, “If that is the case then I’ll leave right now.” He told me not to leave. So I didn’t, nor did I make any attempt to.

The cop had me walk over to the curb, then he got behind me. Suddenly I was on my knees as he started choking me. The cruiser showed up and I yelled to the group of teens, “Get the camera out.” Then as I was peacefully going into the cruiser the same cop punched me hard in the face without warning or cause, giving me a black eye. I am sure the two other cops who were standing there saw it up close. There might have been more assaults on me between the chocking and the punch, but there are no other bruises and I can’t remember since it happened so fast.

At the police station 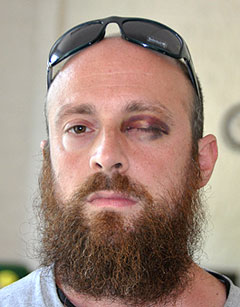 I told the sergeant who did the booking at the station, Sgt. Manocchio, many times about the assault. He just ignored me. I showed him my swelling eye, and he ignored it. The sergeant asked me six times if I planned to blow up the carnival. I asked, “What on earth gives you that idea?” He said, “You guys are known for that sort of thing. I admit it hasn’t happened in a while but there was that guy, Eric Rudolph in South Carolina, who blew up the Olympics about 25 years ago.”  [NOTE: It was actually in Atlanta, Georgia in 1996.]

When I was put in a cell he came back and asked me again if there was “anything at the carnival that I left that could do great harm to people.” I said, “I don’t know what you are talking about. I don’t know anything about bombs. I’ve never had that or violence on my record. I don’t know anyone who has bombs or used bombs or knows how to use bombs. Where are you getting this?” Then he said, “I gotta go” and left the station for many hours.

Out of jail, into court

When I got out of jail I found my truck had been broken into. The door was left wide open, everything was moved around as if it had been thoroughly searched, both seats were in the forward position, not how I left it, and there was a pair of plastic gloves on the hood of my vehicle.

Six hours later – the following morning – I was in court and got a copy of the police report. It was filled with lies. I went to file an official complaint at the station. They said the chief was there 9-4 and I just missed him, so I should come back Monday. I spoke further with the sergeant who did the booking, Sgt. Manocchio, and he said he knew nothing about the searching of my vehicle. I had a long conversation about my case. He brought in a detective; I didn’t get his name. I asked why the cop didn’t have a scratch on him if there was a “scuffle” as mentioned in his report. The next day the newspaper police blog said he injured his knee in the scuffle. No mention of it in the police report. Is he changing his story?

The cops also said I’d be getting something in the mail about trespassing against the church, effective indefinitely. “The anti-trespassing order is for life,” I was told. Peter Brunelli, who had been running the fair, was apparently involved with filing a trespassing warning on behalf of the church against me. However, since then I contacted the church and explained the situation, and they’ve lifted that order.

Later — back to police station & scene of incident

On Monday when I came back to the police station a different cop, Lt. Ryan, spoke with me. I said I wanted to file a breaking and entering report regarding my truck. He said I can’t because, though he admitted my truck was searched, he said that there was “suspicious activity by my vehicle” and they had to bring out bomb-sniffing dogs. But he didn’t say what exactly the suspicious activity was. The lieutenant also refused to let me speak to the chief of police saying, “Only I am allowed to take your complaint.” I said I would like a picture of my eye taken as evidence to your investigation. But he said, “YOU DON’T TELL ME HOW TO CONDUCT AN INVESTIGATION, TAKE A PICTURE OF YOUR OWN EYE”.

On Wednesday I went back to the church area to take a picture of where the false arrest took place. I was standing on the public sidewalk taking a few photos. Then a man named Frank, who said he is part of St. Mary’s pro-life group and who was helping out putting things away at the fair, came over to me and said, “The whole town is talking about how you are on the terrorist watch list.” Then, about a minute later, five police cars and at least one additional unmarked car appeared and surrounded me. Even the prosecutor was there in his white shirt and tie. I was accused of trespassing on Church property. But it was obvious that I was only on the public sidewalk so they soon left, though two cars stayed behind to watch me.

I am very disturbed that I’m being accused of being involved with some kind of bomb plot. I have always remained non-violent, have no history of bombs or bomb threats nor ever owned a weapon or a permit. Nor did I ever look any such thing up on line. I’ve never even purchased so much as a firecracker my whole life. Even throughout school I don’t think I was ever in a fight, needed teachers involved, or anything like that — which is unusual for most boys. And besides, I would never fight back to a cop because I know they would a put million charges on someone for doing that. Now I’m facing 2½ years in jail and a big fine. I was just handing out pro-life flyers at a Catholic Church event. (I thought I was in friendly territory.) All of these lies and false charges are absolutely outrageous.