On July 21, 2011, a jury of six found that the notorious late-term abortionist James Scott Pendergraft IV was liable for injuries sustained by a pre-born baby during a failed abortion ten years ago. The jury stunned eye-witnesses in the courtroom by ordering Pendergraft to pay $36,737,660.16 in compensatory and punitive damages.

Yesterday, Operation Rescue obtained two amended complaints in the case that finally concluded last week. Court authorities told Operation Rescue that the case had generated 16 volumes of documents, which were all sealed by the court. However, at the direction of Operation Rescue, one pro-life activist was able to procure the rare documents through an open records request.

The documents reveal an almost typical abortion malpractice case of the kind that has occurred by the thousands over the years. What is extraordinary about this is that the aborted baby survived to sue her abortionist for a crippling monetary judgment. Most of these cases are settled out of court for undisclosed amounts of money, then sealed so the public never knows the truth about the dangers of abortion or the shoddy skills of abortion suppliers in America.

“In this case, Pendergraft’s pride may have been his downfall. If he’d settled this case, we would not have the documentation of the horrific details of his seedy abortion business,” said Newman. “There was an attempt to seal this case, but the documents got out anyway.”

According to the complaint, on November 15, 2001, twenty-year old C.H. walked into Pendergraft’s Orlando Women’s Center for what she thought would be an abortion of her 18-20 week pre-born baby.

Instead C.H. was told by untrained, unlicensed employees that she was 22.3 weeks along in her pregnancy. Because she nearly died from serious complications during the delivery of her previous child, which was delivered by Caesarian Section, C.H. submitted to the abortion out of fear.

Florida law requires that a licensed physician review abortion risks with patients prior to their abortions.

A person purporting to be one of the jurors in the case later posted comments about the trial to a story about it on JillStanek.com. A court observer verified to Operation Rescue that statements made by “Juror” on Stanek’s blog are consistent with what she heard in the courtroom.

She was given a stack of papers to sign and not instructed on the risks(against law) Ms. Howard was checked in and “counseled” by office staff, which as far as we could tell was making sure she signed all the forms and making sure she had the money.

Florida law also requires that all abortions be done by licensed physicians. 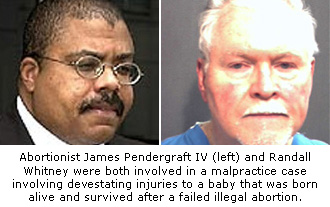 C.H. was never examined by a physician, not before her abortion nor at any time during her ordeal. She gave consent for her abortion to be done by one of Pendergraft’s hired abortionists, Randall Whitney, but Whitney never showed up. In fact, Pendergraft himself was in jail at the time on extortion charges, but records show that he set up protocols that led to the injuries inflicted on C.H and her baby.

At approximately 1:30 PM, on November 15, 2001, unlicensed workers administered Cytotec, a drug meant to treat ulcers that has the unfortunate side effect of causing uterine contractions, and RU 486, an abortion pill not approved for use after the seventh week of pregnancy. The off-label use of this deadly combination of drugs sent her into painful labor. Pendergraft’s unlicensed staff, following Pendergraft’s protocols, administered twelve doses of 200 mg of Cytotec over an eleven hour period, which vastly exceeded any recommended dosages.

“Juror” wrote on Stanek’s blog site that C.H. was in severe pain, but was denied pain medication and requests to speak with Whitney by Tanya Severence, a medical aide with only a high school education, who “ran the show.” He indicated that testimony showed that the excessive doses of Cytotec put C.H. at high risk for uterine rupture.

At about 1:00 AM on November 16, 2001, C.H. was excruciating pain. One trial observer told Operation Rescue that clinic workers told C.H. to walk off her labor in the parking lot, and if she didn’t like that, she could leave.

C.H did in fact leave the clinic and was later rushed to a local hospital where she delivered by Caesarean Section a viable baby girl with a sub-normal Apgar score of 3/3 and weight of 555 grams or 1 pound, 3 ½ ounces.

If C.H. had stayed at the clinic, and providing her uterus weakened by surgery did not rupture, she would have been expected to squat over a toilet and deliver her baby into the bowl.

One of the things that kept me up at night was hearing the routine practice was for the women to void the fetus’ into the toilet of the facility, often by themselves. The MA testified on occasion movement was seen, yet no vitals were checked or resuscitation was performed. All of these protocols were put into place long ago by Pendergraft. He preys on poor, scared women in their time of desperation. Howard was 20 when this occurred. Her feelings of guilt are palpable, yet she is also a victim…

Tanya [Severance] testified squirming was observed “a couple times” which to me translated to numerous times. All the clinic workers said most of the infants were evacuated into the toilet as well. Pendergraft even testified it was no big deal and that “Most countries squat to give birth”. Needless to say his testimony did him no favors in our eyes.

In the end the jurors awarded a total of $36.7 million in the following increments:

While the judgment “rang the bell” for the plaintiffs and should be enough to put Pendergraft out of business for good, there is concern that C.H. and J.F. may never collect a dime.

Pendergraft operates several Limited Liability Corporations that could shield him from paying. “Juror” voiced these concerns on Stanek’s blog:

Pendergraft in fact has upwards of 8 LLC’s he funnels money through. The umbrella company for his 5 clinics, Wilson Management, he put 64% controlling interest in his girlfriend’s name and the other 36% is in his. He and his girlfriend refused to divulge the umbrella company’s finances as authorized by discovery rules, choosing to instead be charged with contempt. All of the jurors’ greatest hope is the plaintiff can recover the money awarded. Unfortunately, we all realize it most likely will be a long hard road fraught with appeals. But that is out of our hands.

Pendergraft is adept at skirting the full consequences of his actions. His medical license has been suspended four times and is currently suspended, yet he continues to operate and profit from five Florida abortion mills.

Operation Rescue has worked to expose Pendergraft and his misdeeds for years.

“While the events leading to this malpractice case took place a decade ago, we have every reason to believe that shoddy and dangerous practices continue at Pendergraft-operated abortion clinics. We will continue to work with the authorities and through all peaceful, legal avenues available to us until Pendergraft and his cohorts are out of the abortion business for good,” said Newman.