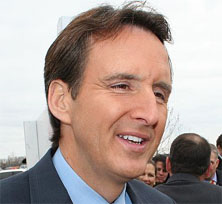 Fresh from signing a pro-life pledge sponsored by the Susan B. Anthony list to appoint judges who would appeal to pro-life voters and to de-fund abortion and Planned Parenthood, Tim Pawlenty is receiving high marks from pro-life advocates.

In a new analysis piece at the National Catholic Register, pro-life leaders said Pawlenty has assembled a record on abortion that leads them to say he is someone pro-life voters can trust to become the Republican nominee and to face pro-abortion President Barack Obama.

Scott Fischbach, executive director of Minnesota Concerned Citizens for Life, is the head of the states largest pro-life organization. He knows Pawlenty well — having worked with the former Minnesota governor and his staff extensively to push for pro-life legislation.

“We’ve always considered him one of us,” Fischbach told the newspaper, calling Pawlenty “solid as a rock” when it comes to standing up for pro-life principles. Fischbach said Pawlenty always spoke at pro-life events in Minnesota, issued a proclamation for “Sanctity of Human Life Day” and was invited to be the keynote speaker at a banquet sponsored by the Susan B. Anthony List in Washington.

“Under the leadership of Gov. Pawlenty, Minnesota now has the lowest teen abortion rate ever, and the lowest number of abortions performed since 1975. I know first-hand the lives that Tim Pawlenty saved as my governor,” Fischbach has said.

Charmaine Yoest, president and CEO of Americans United for Life, also had kind words for the former governor and state legislator, telling the Catholic paper, “We are very impressed with his pro-life commitment. He’s really solid, and it’s exciting to have somebody who is willing to talk about defending life on the campaign trail.”

The Register tallied up some of the pro-life bills Pawlenty signed that have led to a reduction in the number of abortions in his home state.

“As a legislator, Pawlenty was a leader in the fight to secure passage of the Woman’s Right to Know Act, which requires a 24-hour waiting period before an abortion can be performed. Govs. Arne Carlson and Jesse Ventura had vetoed the bill before Pawlenty signed it in 2003. The law, which requires that women be informed of risks associated with abortion and instructed about fetal development, was regarded as one of the strongest informed-consent bills in the United States at the time of its passage,” the newspaper said. “Among the other measures Pawlenty has signed are a law that made Minnesota the first state to provide perinatal hospice as an alternative for women who want to abort a child who has been diagnosed with a fetal anomaly; the Unborn Child Pain Prevention Act, which mandated that a woman aborting a child at 20 weeks or later be offered a painkiller for the child; the Positive Alternatives to Abortion Act, which provides services such as medical and nutritional assistance to help at-risk women carry their pregnancies to term.”

“Pawlenty has compiled a strong record on other issues. In 2008, he vetoed the Kahn-Cohen Cloning Bill, which would have legalized human cloning and required taxpayers to fund the procedure. He supports adult stem-cell research but opposes the use of embryonic stem cells,’ the article added.

Later, Pawlenty named Eric Magnuson, an attorney who has worked with pro-life groups, the Chief Justice of the Minnesota Supreme Court. He had written an amicus brief for a pro-life group in a case arguing that taxpayers should not be forced to fund abortions with their tax money. Governor Pawlenty also felt so strongly about appointing Jamie Anderson to the 4th Judicial District Court that he bypassed the state’s Commission on Judicial Selection to ensure the respected pro-life attorney had a seat.

Tom Pritchard, president of the Minnesota Family Council, summed up Governor Pawlenty this way:  “As governor, he didn’t compromise his principals, but he was adept at dealing with the liberal political and media culture. He’s a decent, solid guy.”