Conservative political activists are up in arms because the post, which Wonkette has defended, calls Palin’s son trig, who has Down syndrome, “retarded,” “somewhat alive,” and includes crass claims that Palin conceived her son as a victim of incest.

Below are images of messages each company placed on Twitter responded to people who shared their concerns with the corporations in an impromptu conservative boycott of Wonkette’s advertisers that erupted on Twtter Wednesday afternoon.

Papa Johns pizza confirmed it would not advertise with Wonkette. 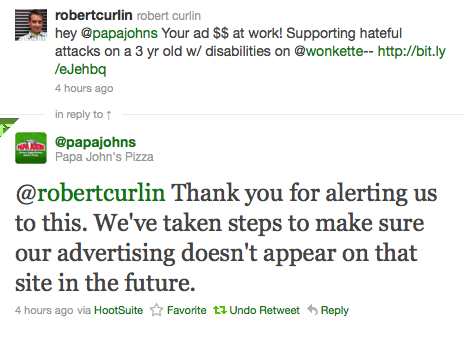 And Vanguard financial also confirmed it would take steps to stop advertising with the liberal blog.

Wonkette responded with tweets of its own claiming Papa Johns was engaging in “homophobia.”

Meanwhile, Wonkette Chief Editor Ken Layne defended the post in response to a query from the web site Mediaite as one attacking Palin’s supposed use of her mentally disabled son at political events. He also tweeted:  “We beat up on Sarah Palin’s craven use of her son as a political prop. Child protective services should take Trig away.”

“On whose account are you requesting that Jack Stuef remove a post mocking Sarah Palin’s well-documented use of her special needs child as a political prop? Is this coming from Mediaite? Which editor?” Layne asked of media writer Tommy Christopher. Christopher responded to the comments:

Apparently, Layne (and presumably, Stuef) think it’s okay to attack a baby if they have a good reason not to like his mom. The logic seems to be that by attacking Trig, they’re demonstrating why Palin shouldn’t have put Trig “out there.” It’s definitely not a cheap pretext to do retard and rape jokes.

I responded, “I’m not asking THAT you remove it, just if you’re going to.”

He hasn’t answered back, so I guess that’s a no. That’s not surprising. Wonkette’s entire brand is staked on pure, unapologetic id, so taking down a post because people found it offensive would be completely self-canceling. If Ken Layne really believes in retard jokes as a vehicle for the public good, he should absolutely stand by them, and I’ll stand where I stand.

Layne continued the email exchange with Christopher, in which he claimed the post was one of “political satire” and that such web sites shouldn’t be required to remove such posts.

Christopher concluded: ” I told you, I’m writing a piece of commentary, and wanted to present your side of the story. I guess you have. My interest in writing commentary is that I was deeply offended by the piece, and as the father of two special needs children, felt compelled to write about it. You and Jack think your satirical point redeems the vile [incest] and retard jokes, I disagree.