President Barack Obama has nominated former Kansas Attorney General Stephen Six as a judge on the Federal Appeals Court in Denver. Six was involved in obstructing the prosecution of Planned Parenthood on 107 criminal charges and, according to some, tied the hands of the prosecutor in the 2009 criminal case against George Tiller.

Because of this, Operation Rescue opposes Six’s confirmation on the grounds that his political biases make him unfit to serve.

Six’s ascension to state office followed a contentious and scandal-ridden political battle over abortion, which continued unabated under his administration.

Six was appointed by former Gov. Kathleen Sebelius, a rabid abortion supporter who was known for appointing ideological soul-mates to positions throughout the state government that would protect abortionists from accountability to the law. Six replaced Paul Morrison, who was hand-picked by Sebelius to run against then-Attorney General Phill Kline, for the purpose of halting his investigation into abortion clinics in Kansas. Morrison was forced to resign in disgrace after being caught in a sex and corruption scandal where he tried to use his illicit lover to spy on Kline’s abortion investigation for the purpose of derailing it.

Before Kline left the Attorney General’s office, he had filed 30 criminal charges against George Tiller related to illegal late-term abortions. That case was dismissed on shady jurisdictional grounds. Kline appealed the dismissal and appointed a special prosecutor to continue the case, but Morrison withdrew the appeal and fired the special prosecutor hired by Kline.

Later, under intense political pressure, Morrison filed 19 criminal charges against Tiller for doing illegal late-term abortions without an independent second opinion that the abortions met the narrow exceptions under the law that banned abortions after 22 weeks. These charges were weaker than Kline’s case. Six inherited this second case against Tiller upon the resignation of Morrison and allowed it to move forward while refusing to reinstate the stronger case against Tiller.

Six appointed Barry Disney to prosecute the case. However Six told Disney not to take any “foul punches” against Tiller. In the end, Disney hardly got any punch at all. Disney entered into a stipulated agreement about the so-called facts in the case prior to the trial that greatly narrowed the focus of Disney’s prosecution. In fact, Disney called only one witness, Ann Kristin Neuhaus, a disgraced abortionist who was once declared a “danger to the public” by the Kansas State Board of Healing Arts. Disney alleged that Neuhaus had an improper financial affiliation with Tiller and provided all his second opinions required for post-viability abortions. Neuhaus was a hostile witness who was uncooperative on the stand. Tiller was soon acquitted of the charges.

While it is Operation Rescue’s opinion that Mr. Disney did the best he could at the time of trial under the restrictions placed on him, it is also our belief that Disney’s hands were tied by Steve Six and that the pre-trial stipulation guaranteed the failure of the case.

In an unusual “job swap” Kline was appointed by the Republican Party to fill Morrison’s term as Johnson County District Attorney, when Morrison was elected as Attorney General. There Kline continued his abortion investigations of Planned Parenthood. In 2007, Kline filed a massive 107 count criminal case against Comprehensive Heath of Planned Parenthood in Overland Park, Kansas. The case was based on redacted abortion records obtained by Kline through subpoenas issued by Judge Richard Anderson while Kline was still the Attorney General.

Planned Parenthood and George Tiller had resisted the subpoenas and filed a dizzying series of legal cases and motions before the Kansas Supreme Court, which was comprised predominately of abortion supporters appointed by Sebelius. The redacted records that were to be evidence in District Attorney Kline’s case against Planned Parenthood were kept in the custody of Judge Anderson.

In January, 2008, Judge Richard Anderson gave testimony at a hearing in the Planned Parenthood case. He told of Kline coming to him with concerned that records had perhaps been over-redacted, and that it was possible that some documents had been “manufactured.”

Judge Anderson considered these concerns extremely serious, and embarked on his own investigation, taking certain documents to a Topeka Police handwriting expert for analysis. There was a discrepancy and Anderson immediately notified all parties involved. Below is one set of records to show the discrepancy — and the absurdly heavy redactions. 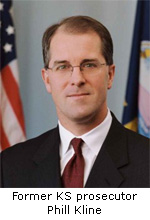 In preparation for a preliminary hearing in the Planned Parenthood criminal case, Kline reissued subpoenas to Anderson and the Kansas Department of Health and Environment (KDHE). A motion to quash the subpoenas was held on April 3, 2008, was taken under advisement. That same day, Steve Six heard about the possibility that evidence could be presented at a preliminary hearing on April 7, 2008, and immediately filed an emergency motion for a protective order with the Kansas Supreme Court.

However, Six withheld important information in his emergency filing. He neglected to tell the Court that Anderson had previously testified at a hearing in January where the “manufactured” records had been discussed. He also failed to mention that the preliminary hearing had been delayed six weeks.

A gag order was issued by the Supreme Court on April 4, 2008, ordering Anderson not to testify or release any documents, while erroneously thinking that the information was still secret and that the preliminary hearing was only a couple of days away.

That gag order stood, delaying the prosecution of Planned Parenthood for over two years until October, 2010, when the Supreme Court modified their order to allow Anderson to testify. However, the Court at Six’s request continues to block certain documents under the control of the KDHE that could be vital in proving that Planned Parenthood manufactured documents in an effort to cover up for the fact that the documents bearing the determination of fetal age at the time of the abortion were illegally missing from patient records.

“Steve Six has a lot to answer for,” said Operation Rescue President Troy Newman, whose group worked to convene a grand jury and took other actions to help bring CHPP to justice. “The charges of illegal late-term abortions and making false representations to authorities to cover for other crimes are serious charges that deserve to have a fair hearing in court. Steve Six placed himself between a county prosecutor and the perpetrator for the express purpose of concealing evidence of Planned Parenthood’s crimes. That is unconscionable.”

Six gets evidence kept from Kline

While Anderson remained gagged in the Planned Parenthood criminal case, Six was exempted from the gag order and during that time was allowed to access evidence gathered by Kline’s investigations to prosecute George Tiller in Wichita, Kansas, in March, 2009. That case ended in Tiller’s acquittal. Nevertheless, the treatment of Six’s requests for evidence were granted while Kline’s requests were denied, leaving open speculation that political friendships and feuds have unjustly overruled the doctrine of equal justice under the law.

Meanwhile, after an intensive media campaign against him, Kline lost election as Johnson County District Attorney and left the state. An ethics complaint was filed against Kline by an attorney that had represented Tiller. That ethics case is ongoing.

The prosecution of Planned Parenthood, which Six blocked with his request for a gag order, hinges on the ethics trial of Phill Kline. If Kline is convicted of unethical conduct, it will give the new District Attorney, Steve Howe (a former loyal employee of Morrison’s), reason to drop the case filed by his political nemesis Kline.

Once the ethics case was filed, Kline sought and was denied representation from the state, forcing him to spend $200,000 of his own money on legal fees in an effort to keep the Planned Parenthood case alive and keep the evidence from disappearing forever.

Finally, Six granted Kline’s request for state representation. Six required Kline to fire the attorneys who had represented him for years, and replaced them with Reid Holbrook and Mark Stafford.

“Holbrook’s appointment by Six as Kline’s attorney gives the appearance of impropriety. Whether the appointment was political payback, or an attempt subvert justice and control the outcome of the ethics case through a political supporter and ally, it has all the earmarks of political corruption,” said Newman.

To make matters worse Mark Stafford was once the Chief Counsel for the Kansas State Board of Healing Arts during the time Kline was investigating abortion clinics. Stafford was involved in the politically motivated “clearing” of Tiller in the third-trimester abortion death of Christin Gilbert. He was forced to resign in disgrace from the KSBHA amid accusations of corruption and Board incompetence.

“Steve Six has placed Kline in the position of having his political enemies sitting at his defense table. Six has stacked the deck against Kline and in favor of Planned Parenthood, the group that once threw a drunken birthday party for Sebelius, his own political benefactor. He has proven that he is willing to place the interests of justice behind the advancement of a political agenda assigned to him by Kathleen Sebelius and others,” said Newman.

“In fact, Six acted the role of Sebelius’ ‘flying monkey’ during his tenure as Attorney General, more than the role as the state’s ‘top cop.’ Six is too easily manipulated by Sebelius and others to whom he owes political favors, and has a track record of allowing politics to trump the honest seeking of justice,” said Newman. “That makes him dangerous and tremendously unqualified to sit on the Federal Bench.”

Six will have to face Senate Confirmation and will soon testify before the Senate Judiciary committee. Please contact your Senator and ask him or her to oppose the nomination of Stephen Six to the Federal Appeals Court. Click to locate your Senator.