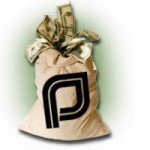 The House of Representatives today voted overwhelmingly to scrap funding for the Planned Parenthood abortion business and ensure it can’t receive any federal funds through any departments or programs.

House members approved the Pence amendment on a 240-185 vote with 10 Democrats joining most Republicans to support de-funding the abortion business. Another 7 Republicans sided with almost all of the pro-abortion Democrats in the lower chamber in voting for the pro-abortion organization to receive taxpayer funds. (See below.)

Congressman Mike Pence of Indiana was the main sponsor of the amendment, which prevents federal funding of Planned Parenthood’s national organization and 102 named affiliates.

“This afternoon’s vote is a victory for taxpayers and a victory for life. By banning federal funding to Planned Parenthood, Congress has taken a stand for millions of Americans who believe their tax dollars should not be used to subsidize the largest abortion provider in America,” he said after the vote. “I commend my colleagues in both parties for taking a stand for taxpayers and a stand for life. I encourage my colleagues in the Senate to support this legislation and end federal funding of Planned Parenthood once and for all.”

The Pence Amendment does not affect the funding level for any federal program.  Instead, it disqualifies PPFA and its named affiliates from receiving any type of federal funds. Though some Democrats claimed the amendment is unconstitutional, in a 2010 ruling, the U.S. Court of Appeals for the Second Circuit rejected a claim that a similar law, cutting off federal funds for the organization ACORN and its affiliates, violated the Constitution’s Bill of Attainder Clause

The fight to stop Planned Parenthood funding is not over as the amendment is part of a continuing resolution bill needed to fund the federal government and the funding apparatus still faces Senate action and likely conference committee action — which could ultimately leave the amendment out of the final draft of the bill that goes to pro-abortion President Barack Obama.

Matt Smith, the president of Catholic Advocate, applauded the vote in comments to LifeNews.com.

“We need to get government spending under control to get our economy back on track,” he said. :If there is one industry in this country that should never receive a tax-payer subsidy, it is Planned Parenthood. Thank you to Congressman Pence and the House of Representatives for listening to the voice of the American people who do not want their tax dollars supporting the abortion business.”

Pence  led the way in fighting for the amendment to ensure that none of the federal funds in any program or department would go to the abortion business, which does more than 324,000 abortions annually and receives more than $363 million in federal, state and local taxpayer funds.

Rep. Barbara Lee of California called the amendment a “war on women” and Rep. Jan Schakowsky said Planned Parenthood “saves money and saves lives” by the non-abortion health care it offers and “now is not the time to restrict women’s access to health care.”

And Rep. Gwen Moore of Wisconsin went as far as implying that it is better to have an abortion than make a child be forced to live “eating Ramen noodles” and “mayonnaise sandwiches.”

“And abortion is what Planned Parenthood does. They are responsible for nearly one-quarter, or over 324,000, abortions in the United States every year. It’s an outrage that taxpayers have to support Planned Parenthood,” the group told LifeNews.com.

Voting Yes, or pro-life, on the amendment: 230 Republicans and 10 Democrats (Boren of OK, Costello of IL, Donnelly of IN, Lipinski of IL, McIntyre of NC, Peterson of MN, Rahall of WV, Reyes of TX, Ross of AR, and Shuler of NC)

Voting NO, or pro-abortion, on the amendment: 178 Democrats and 7 Republicans (Bass of NH, Biggert of IL, Bono Mack of CA, Dent of PA, Dold of IL, Frelinghuysen of NJ and Hanna of NY)