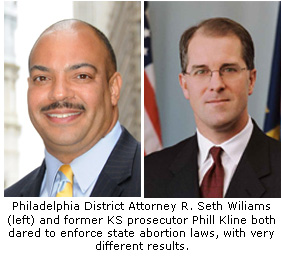 When Philadelphia District Attorney Seth Williams raided the medical offices of Kermit Gosnell, he thought he was raiding a pill mill, the largest source of illegal painkillers sold on the streets of his city. Williams instead discovered a squalid “house of horrors” where illegal late-term abortions were done on drugged, dazed women, where the late-term babies were born alive then murdered by severing their spinal cords with scissors, and where the severed feet of those late-term babies were kept in jars as trophies.

Williams, a newly elected Democrat, was not an anti-abortion crusader by any means, but what he found shocked him. He convened a grand jury and began to investigate Gosnell’s illicit abortion operation and tried to get to the bottom of why this man was allowed to literally get away with murder for so long.

What the grand jury discovered was published in sharp, unequivocal language that was painful to even read.

They determined that reason Gosnell was able to murder hundreds of newborn babies and two patients over the years was because of a corrupt political climate that rewarded state workers that looked the other way when complaints came in to state agencies. These were people who should have been more about protecting the public than the abortionist, but time and again they refused to do their duty to the people of that state by ignoring reported abuse after abuse.

The grand jury named names. It called the concerted political policy of covering up for abortion clinics, even in the wake of reported patient deaths, a “complete regulatory collapse.”

“This doesn’t even rise to the level of government run amok,” said Gov. Tom Corbett. “It was government not running at all.”

Gov. Corbet continued, “It’s not enough to prosecute the wrong doing. We have to change the culture. That starts here. It starts now.”

Just this week, heads began to roll. Gov. Corbett fired or accepted the resignations of several employees in two state agencies that bore responsibility for ignoring complaints and enabling Gosnell’s criminal enterprise. Policy changes have been made to ensure that abortionists are accountable to the law, not above it.

While Pennsylvania begins the task of cleaning up their abortion corruption mess, Kansas, which has experienced its own abortion-related problems, remains in denial about the corruption that threatens to derail an attempt to hold Planned Parenthood accountable to the law.

The last vestiges of a deeply embedded cabal of politically corrupt abortion supporters continue not just to ignore abortion abuses in that state, but to actively work to derail a massive 107-count criminal case filed by former prosecutor Phill Kline.

Even though Kline has left public office and the state, the remaining puppets of the rabidly pro-abortion former Gov. Kathleen Sebelius work feverishly to discredit Kline for the purpose of giving Planned Parenthood attorneys a basis to move to dismiss the criminal case based on “prosecutorial misconduct.” An ethics complaint filed against Kline by attorneys for abortionists he attempted to prosecute, is set for trial on February 21, 2011,

While Governor of Kansas, Sebelius actively worked against protections for women from abortion abuses. She vetoed overwhelmingly popular bills that put curbs on abortion, she impeded an investigation into the death of a patient during a botched third-trimester abortion, and she appointed pro-abortion cronies to state oversight agencies that she knew would protect abortion businesses.

In appreciation, Planned Parenthood honored Sebelius by throwing a birthday bash for her where Planned Parenthood officials and local newspaper editors, joined Sebelius in a drunken conga line celebratory dance. Secretly, she threw her own party for late-term abortionist George Tiller and his entire abortion clinic staff at the governor’s mansion, then lied to cover up for the documented fact that taxpayers footed the bill once Operation Rescue produced photos and receipts from the event.

The Sebelius abortion-cover-up cabal has since mostly been purged from Kansas. Sebelius and her political crony Mark Parkinson have been replaced by a pro-life Gov. Sam Brownback. Her handpicked Attorney General Paul Morrison resigned in disgrace once it was revealed that he attempted to use his illicit lover to spy on and impede abortion investigations conducted by Kline that resulted in the filing of a massive the first-of-its-kind criminal complaint against the abortion giant. Morrison’s Sebelius-appointed successor, Steve Six, who helped gag the evidence that Planned Parenthood “cooked the books”, was defeated by pro-lifer Derek Schmidt.

The Kansas State Board of Healing Arts, which classified horrific abortion abuses simply as “standard of care” has experienced a vast overhaul. Former Executive Director Larry Buening, who helped abortionists evade Kansas late-term abortion restrictions, resigned in disgrace. The head of the Kansas Department of Health and Environment who coached late-term abortionists how to fill out mandatory reports to conceal illegal abortions, has been replaced by someone who is now requiring that reporting be done as the statute originally intended.

The last vestiges of the Sebelius web of abortion corruption remains in the judicial branch of state government. Five out of seven justices are Sebelius/Parkinson appointees, including radical pro-abortion activist Carol Beier, who once worked for the National Women’s Law Center, liberal legal group that focuses on the advancement of abortion.

The Supreme Court is responsible for appointing the Disciplinary Administrator’s Board, which will hear the trumped-up ethics case against Phill Kline next week. Two out of three of the board members that will decide Kline’s fate, and along with it the fate of the Planned Parenthood criminal case, gave financial contributions to Kline’s political opponents.

Make no mistake, Kline’s ethics case is the last gasp of a bitter political vendetta against a man who dared to enforce Kansas abortion laws. It is without basis. Even the pro-abortion State Supreme Court has cleared Kline of wrongdoing and refused to sanction him. Disciplinary Administrator Stan Hazlett’s own investigators cleared Kline in a 2008 report that was buried by him and kept from Kline until discovery in this ethics case revealed it.

There is no doubt that if Philadelphia’s Seth Williams had filed his abortion case in Kansas, his head would now be on the chopping block as well.

When thinking of the vendetta of the Disciplinary Administrator’s office against Kline, one cannot but think of Herman Melville’s classic novel Moby Dick and the obsession of Captain Ahab for vengeance that ultimately cost his life and the lives of his crew.

“He piled upon the whale’s white hump the sum of all the general rage and hate felt by his whole race from Adam down; and then, as if his chest had been a mortar, he burst his hot heart’s shell upon it.”

The words of Ahab as he thrust his last harpoon at the object of his hatred have passed into immortality, “… to the last I grapple with thee; from hell’s heart I stab at thee; for hate’s sake I spit my last breath at thee.”

“The sum of all the general rage and hate” of the abortion cartel is being expressed by the last fading remnant of the Sebelius abortion corruption network through this final stab at Phill Kline. Even if it costs them their reputations and their careers, as it has so many other Kansas officials who have been caught covering up abortion abuses, the Disciplinary Administrator’s office lunges ahead in a desperate effort to discredit Kline with the vanishing hope that they can derail his criminal charges against Planned Parenthood.

Let us hope that the harpoon hurled in hatred toward Kline does not kill this criminal case or the hope that there is still some place for justice in Kansas, as it has finally been found in Pennsylvania. Dropping the spurious ethics case against Kline and pressing forward with the prosecution of Planned Parenthood on the 107-charges would be a start. Getting rid of the corrupt enablers would finally put an end to the abuses.

The words of Gov. Corbett are perhaps even more applicable to Kansas than Pennsylvania, “It’s not enough to prosecute the wrong doing. We have to change the culture.”